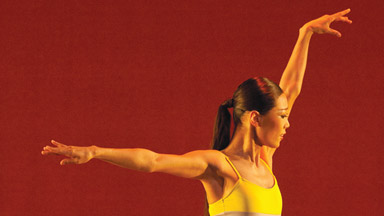 Toni Valle is the new general manager of Karen Stokes Dance (KSD). Valle brings 12 years of professional experience on and off the stage to KSD. As project director of Dance Source Houston for 11 years, Valle oversaw A Weekend of Texas Contemporary Dance at Miller Outdoor Theatre, the Dance Card, the Dance Source website and the Dance Table.

Artadia: The Fund for Art and Dialogue is accepting applications for the Artadia Awards 2012 Houston from all visual artists living and working in Harris County, TX.  Award recipients will be selected in the fall of 2012 through Artadia’s two-tiered jury process.  Application deadline is September 24.

The Society for the Performing Arts has added Shen Wei Dance Arts to their 2012/2013 season. The celebrated company will perform on May 18 at the Brown Theater at Wortham Center.

Shen Wei Dance Arts in The Rite of Spring, part of Society for the Performing
Arts 2012/13 season. COURTESY OF SHEN WEI DANCE ARTS.

Lydia Hance is the new education manager at Hope Stone, where she will direct the Hope Stone Kids (formerly known as Kid’s Play) and other education programs, which include a multi-generational music class, creative movement, creative dramatics and youth yoga.

MFAH Director Gary Tinterow has announced the appointments of David Bomford and Zahira (Soni) Véliz to key conservation positions at the Museum of Fine Arts, Houston. Bomford is formerly of the National Gallery, London, and the Getty Museum. He has been appointed Director of Conservation. Véliz is a longtime independent conservator and art historian working with international collections, including the Museo Nacional del Prado and Britain’s National Trust. The MFAH has also been awarded a grant of $102,811 from the Institute of Museum and Library Services (IMLS) to support the conservation of some 900 silver alloy works of art in the permanent collection.

John Breckenridge, president and CEO of Theatre Under The Stars (TUTS), is proud to announce Bruce Lumpkin will join the staff as artistic director.  In this position, Lumpkin will maintain artistic oversight of TUTS’ producing operations, including all self-produced shows and galas, as well as provide creative direction to TUTS’ Humphreys School of Musical Theatre.

Bayou City Concert Musicals kicks off its 2012-13 season with a fully-staged concert version of the classic musical, One Touch of Venus, for five performances at the Heinen Theatre, 3517 Austin, September 6-9, 2012, followed by two cabaret productions at the Performance Centre at the Ensemble Theatre.