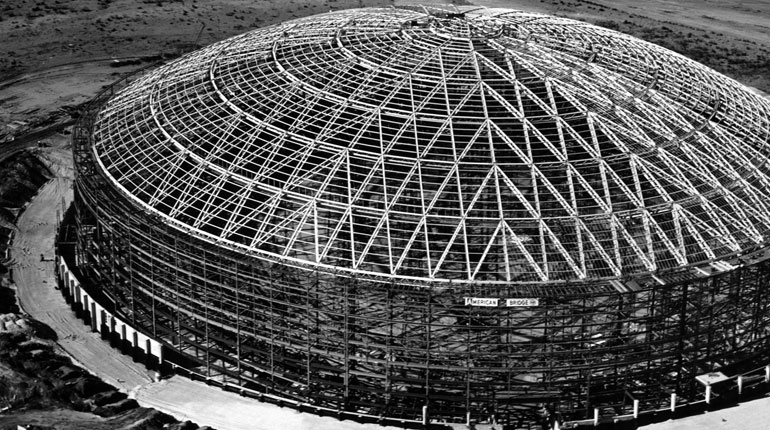 Earlier this spring, a proposal to partially demolish the Astrodome and keep its steel skeleton as a monster-sized gazebo to shade NFL tailgaters, rodeo livestock and carnival-goers, and sports practice fields became a local viral sensation. It was even endorsed by the mayor on Facebook. This scheme, devised as a thesis project by recent University of Houston architectural graduate, Ryan Slattery, was captivating because of its witty and poetic response to a situation that has become something of an embarrassment to Houston.

Once the eighth wonder of the world (c. 1965), the old Astrodome we knew is no longer. Today it is just a squat, moldering pile in the shadow of its much larger replacement, Reliant Stadium, which was intentionally built uncomfortably nearby so as to make its demolition seem inevitable. Houstonians don’t like to think about the past; they prefer to erase it (bye-bye, Foley’s!), and the decaying Astrodome has steadily become a sort of unpleasant, pop-culture memento mori. Why can’t it just go away?

Plans to do something with the Astrodome floated during the decade since it abandonment were characterized by their utter banality. Hotels, casinos, science centers and the like — big yawns all around. Slattery’s scheme would preserve the Astrodome’s nine-acre spread as a multi-purpose, quasi-public outdoor space. (That’s pretty big. In comparison, Discovery Green is twelve acres.)

Architects, myself included, often tend to like “structure” and buildings that are under construction better than those that are finished. Even crappy suburban spec houses have a noble purity when they are just a concrete slab and 2x4s, before the pipes, wires, and air-conditioning ducts go in and clutter everything up. By peeling away the cheesy concrete pilasters and decorative screens surrounding it, the lacey cage of steel columns and arcing beams (hopefully painted a bright, fun color) would be an elegant foil to the hulking beige mass of the Reliant Stadium.

Despite the fact that programmatically it doesn’t seem quite worked out yet, it’s a powerful suggestion with a conceptual clarity that begs for further analysis. The playing field of the dome is actually 25 feet below grade, and just how livestock, beer-guzzling football fans, and peewee soccer players are going to cohabitate peacefully is a logistical issue of no small complexity.

Another question is that of access. Since the Astrodome is essentially in the center of a giant parking lot with gates as well as a long, un-shaded walk discouraging the public from visiting, one wonders who would actually use the repurposed dome. According to Slattery, statistically Houston doesn’t have enough green space, but if this new green space isn’t actually public, how is that going to help the average park-deprived citizen? The great challenge of Slattery’s scheme is how to surmount this problem. If he or someone else can do that, then this definitely gets my vote.

Slattery’s not the only one proposing what amounts to a variation on the industrial-engineering aesthetic popularized by the improbable success of Manhattan’s High Line park.

Seán Murphy, a project manager with the architecture firm Johnston LLC, said the firm will submit to Harris County Commissioners Court “a concept that we believe will not only reclaim the magnificence of the Astrodome, but generate substantial new revenues from the proposed amenities.”

The firm had worked with Houston preservationist and Houstorian.org founder James Glassman on the concept since November and “had already kicked the idea around with Harris County when we got wind of Ryan’s project,” Murphy said.

If approved, a feasibility analysis would be the next step in a process that Murphy hopes will lead to a bond measure for a public vote. If so, he said, he’d love to hire Slattery as a consultant.

—BEN KOUSH
Ben Koush is an architect in Houston. He writes for Cite magazine and Texas Architect.