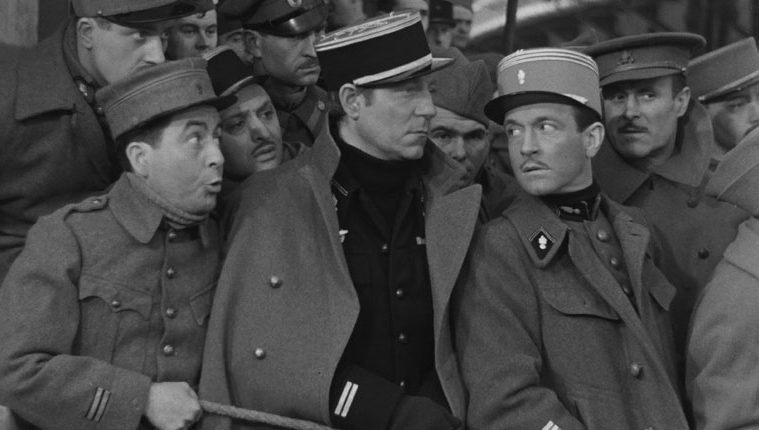 War on Film at MFAH

In conjunction with its exhibit, WAR/PHOTOGRAPHY: Images of Armed Conflict and Its Aftermath, Museum of Fine Arts, Houston presents War on Film, a series of five films chronicling armed conflict in the 20th century. Given the extensive catalog of violence rendered on film, it seems hard to pick just five, but the selections cover important ground.

Paths of Glory, one of Stanley Kubrick’s earlier films, is a profound moral drama. Made in 1957, Kubrick’s film critiques the outdated patriarchal understandings of war and warriors of the First World War era. A “noble” French general (the actors playing Frenchman speak English) sends his men into a suicide mission, but when the mission is deemed futile, their commanding officer, played wonderfully by Kirk Douglas, orders a retreat to save the lives of his men. The old war guard accuses the soldiers of being cowardly and sentences some of them to death in order to make an example. Douglas does his best to step in the way of the senseless executions; it’s a powerful statement for human life and against the pretense of nobility in war.

Michael Cimino’s The Deer Hunter is the most critically controversial of the films. The emotionally intense (IMO pointlessly gratuitous) Russian roulette scenes serve as the central image of the film, which is ethically troubling because it’s never been shown that the Viet Cong ever made any American soldiers actually play Russian roulette. Directors of war films usually have enough terror to work with without making stuff up, but according to Cimino, it doesn’t matter because his film is not political. Can anything involving war avoid being political? It’s excessive and an hour too long, but I enjoyed its depiction of a blue-collar steel town in Pennsylvania. My misgivings aside, the performances of Robert De Niro, Meryl Streep, Christopher Walken, and John Cazale are top notch.

I still remember the first time I saw Jean Renoir’s La Grande Illusion. It was the first so-called “art house” film I’d ever seen. I was hooked.

La Grande Illusion glows, visually and emotionally. I couldn’t believe that a movie made in 1937 could be so sharp and expansive. Three French officers in the First World War drift between German prison camps trying to alleviate the agony of boredom by perpetually attempting escape. It’s a war movie, but instead of battles, the struggles are between upper and lower classes and their respective ideologies.

The aristocratic German officers give special treatment to Captaine de Boiledieu, an aristocrat, while looking down on working class Maréchal and his Jewish friend Rosenthal. The performances are heartfelt and moving.

Watching La Grande Illusion  is like stepping back in time to watch the old world order in its last throes. It’s a beautiful, nuanced eulogy to nobility. I wouldn’t miss the chance to see a quality print of the film.

Although it was made in 1966, The Battle of Algiers is still urgently relevant to global politics. It chronicles the 1956-57 conflicts between the French Algerian authorities and the National Liberation Front during the Algerian War (the Algerian people’s struggle for independence while occupied as a French colony). This, along with several other struggles, marked a new phase in the way war was conducted − most notably the rise of civilian terrorist tactics and the widespread use of torture and intelligence to undermine that activity.

Although it was banned in France for 10 years after its release, the film isn’t biased (it’s hard not to feel sympathetic to the occupied in colonial struggles). The motivations, tactics, and costs of both sides’ violence are clearly investigated with a nominal amount of dramatic flair.

In 2003, the Pentagon went so far as to screen the film in an effort to better understand the war in Iraq. The flyer read, “How to win a battle against terrorism and lose the war of ideas … The French have a plan. It succeeds tactically, but fails strategically. To understand why, come to a rare showing of this film.” In order to begin to understand the complicated mess that is foreign affairs in the age of constant post-colonial conflict, this film should be required viewing.

Went the Day Well? is a charming British film made before the end of World War II about a hypothetical situation in which Germans troops infiltrate a quaint country town posing as British. In theory, it seems like a sort of nationalist propaganda piece, but it’s a novel idea and really quite good. The ordinary townspeople must band together to rise up and take back their town. And that’s just what they do.
The scenes and spectacles of conflict have changed immensely in the past 100 years. The wind has blown over the soil of the trenches, dispersing it  along with the aristocratic class and the nobility it carried. These days, soldiers pilot unmanned drones with Xbox controllers, which might was well be from a science fiction story told during WWI. While the tactics change, the ethical complications and contradictions are never resolved and every moment is a new catastrophe of ethics and the lack thereof.

Reconsidering history is stepping outside of our assured present, creating the possibility to think and consider, “how is this moment alike and different from the past, and why?” War on Film is a good chance to reconsider that history, and hopefully reconsider the present.

-JOSEPH WOZNY
Joseph Wozny is a writer and musician living in Houston.