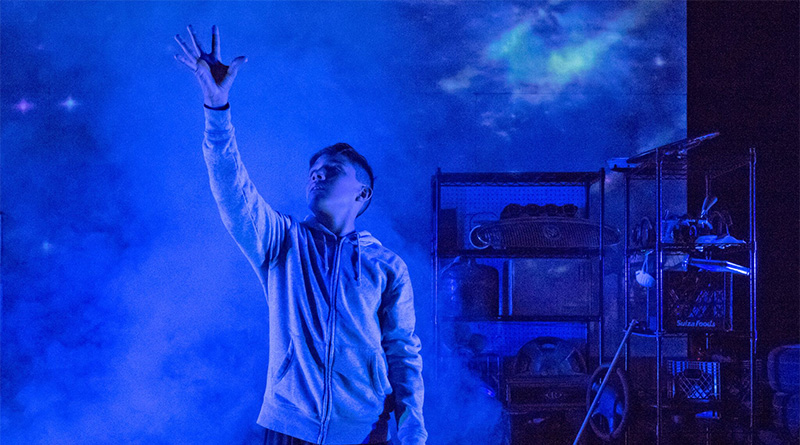 What do we mean when we talk about Latina/o theater in Texas? This was the question I kept pondering at the beginning of yet another one of the wandering/mapping jaunts I occasionally take when I find myself yearning to exploring more Texas theater. Giving myself permission to meander instead of attempting to do a data-driven census, but with a goal of trying to assess the state of Latina/o theater in Texas, I found I couldn’t get very far without answering that first basic question.

So I began my journey by consulting a previous guide, the theater blog Howlround’s series on Latina/o Theater in Texas, and then a few experts: first, Dr. Trevor Boffone, who teaches in the Department of Hispanic Studies at the University of Houston and is the founder of the 50 Playwrights Project: A Digital Space for Latin@ Theatre.

“Most people will say a Latina/o play is a play written by a Latina/a, a person who identifies as Latina/o,” explained Boffone; but he would also include some works by non-Latina/o playwrights that tell authentic Latina/o stories. As the term Latina/o “would only refer to people based in the U.S or with a meaningful relationship with the U.S,” says Boffone, of the agreed upon textbook definition of the term, it led me to a fundamental guiding principle to begin my exploration, that Latina/o theater is US-based theater, and so the question becomes, how are we treating this strand of U.S arts in a state where a third of the population is Hispanic? I found that the answer in many ways depends on where one looks.

Many cities in Texas with vibrant theater communities have non-Latina/o companies regularly producing contemporary Latina/o playwrights or plays that tell those stories. Dallas Theater Center, Stages Repertory Theatre in Houston and ZACH Theatre in Austin, to name just a few, usually have at least one play or musical in their season lineup by a Latina/o playwright or at the very least produce a play that tells their stories.

David Lozano, the executive artistic director of Cara Mía Theatre Company in Dallas, the largest Latina/o theater company in Texas, finds the number of large and mid-sized theater companies producing these playwrights encouraging. “What’s happening right now, which I think is a good thing, is that non-Latina/o theaters are producing about one Latina/o play a year. It is great because they’re presenting the Latina/o experience to their audiences that hopefully will become more diversified. More people will feel comfortable with seeing the Latina/o experience on stage.”

But while we partake of Kristoffer Diaz’s The Elaborate Entrance of Chad Deity, Matthew Lopez’s The Whipping Man, Nilo Cruz’s Anna In The Tropics, Quiara Alegría Hudes’s Water by the Spoonful or Lin-Manuel Miranda’s In the Heights at our favorite Texas professional regional theater, we probably shouldn’t grow complacent while we wait for everyone’s theatrical hero, Hamilton to dance into Houston in 2018.

Because if we’re valuing Latina/o playwrights and stories, should not we also value and nurture Latina/o theater companies? At this company level all cities’ theater communities do not look alike. Along with community and smaller professional theaters, some presenting in Spanish sometimes for immigrant audiences, a few cities have a least one Latina/o theater producing several plays per season. A good example would be Austin’s Teatro Vivo, which produces bilingual theater at Emma S. Barrientos—Mexican American Cultural Center. In addition to collaborating with ZACH Theatre on plays for youth, Teatro Vivo also presents the annual Austin Latino New Play Festival. However, when looking at the whole state, Dallas shines brightest, with not just Cara Mía, but several more companies producing work in English or Spanish, and often catering to distinct audiences.

“The Latina/o companies are doing work in English and they’re focusing on issues affecting Latina/os in the United States,” says Boffone. “The Spanish-language companies are doing work that’s more focused on Latin American identity—people who might live here and who are Latina/o, but they still identify as Chilean, or Argentine or Mexican before they identify as American or Latina/o.”

Dallas’s Cambalache Teatro en Español and Teatro Flor Candela both present in Spanish, while the oldest company, Teatro Dallas, founded in 1985, produces international theater through the Latina/o experience with some work in English and some in Spanish with English librettos.

“We’re the two largest Latina/o theater companies in Dallas,” says Lozano of Teatro Dallas and his own Cara Mía. “I think that perspective is very important to keep in mind because the question is why. Dallas certainly has its advantages. There’s a lot of wealth in Dallas that’s interested in the arts. We have a strong office of cultural affairs that provides funding, space and supplemental funding programs, and our organizations have good relationships with the Texas Commission for the Arts. There’s a share of patrons who like to attend plays, Latina/o patrons who see a lot of value in the cultural expression of the Latina/o experience.”

“One could say Dallas is actually thriving in terms of Latina/o Theaters,” Lozano continues, who also feels their success needs to be put into context and perhaps compared with those midsize non-Latina/o theaters throughout the state.

“To say that we’re the largest Latina/o theater company in Texas can sound exceptional, and it is, considered the conditions, but when you look at the perspective of theater organizations and institutions across Texas, we’re still very small with limited resources and political connections. That’s how I view the state of Latina/o theater.”

While applauding all those productions of Latina/o playwrights we can regularly, or occasionally depending on the city, find in Austin, Houston, San Antonio and his own Dallas, Lozano also sees some drawbacks for Latina/o theater companies.

“There’s also a challenge to that,” Lozano says, of the non-Latina/o-centric companies producing Latina/o plays. “Typically those theaters are the ones that receive the lion’s share of funding. They receive extra credit for producing Latino plays when we’ve been doing it for decades. They also skim the cream off the top of our organization in terms of talent.”

Lozano worries about companies getting an equal share of both funding and talent, and speaks with worry about the talent pipeline that begins with budding young Latina/o artists. “Are they receiving the same access to the arts at an early age and are they able to stay with the arts through high school, college and beyond? The pipeline is a real issue, and it’s racially divided,” Lozano warns.

“But I think what we’re missing is the value of Latina/o theater as a cultural necessity from all people, from Latina/os and non-Latina/os, from city funding agencies and especially private foundations. It’s not being valued, the actual Latina/o theaters themselves. That’s why, I think, you’re seeing major cities in Texas without one Latina/o theater at all.”

One of those major cites is also the fourth largest city in the United States. Houston possess its own thriving theater community and companies that produce Latina/o playwrights fairly regularly, yet there is no Latina/o theater company. (Houston’s Gente de Teatro produces Spanish language plays.) Organizations such as Talento Bilingüe de Houston, that in the past presented performances for adults, and MECA (Multicultural Education and Counseling Through the Arts), which presents and works with theatrical and multi-discipline artists of color, have objectives and missions that are somewhat different from a traditional theater company’s.

“I don’t know that we’d be thought of as part of the larger Houston theater community, and that would be fair because there are a lot of theater companies and organizations that only, or predominantly present theater. And I respect that,” says Estevan Azcona, performance and residency director and music director at MECA. “Our vein is in presenting, so for us, our interest is knowing and supporting artists of color with particular interest in Latina/o artists, and having a sense of what’s going on nationally.”

Sometimes that sense goes internationally for MECA, as they will become one of the presenting partners when the Alley Theatre brings Misa Fronteriza, a comedy created by two theater companies based in Monterrey, Mexico, to Houston in 2018. When deciding to present theater, Azcona must decide if the artist will be relevant to the community and the social and cultural issues important in Houston at any given time as well.

When I asked Azcona about Lozano’s concerns about equity in funding, he was thoughtful. “Most of my experience on that side of things has been within the Latina/o sector, but I do know from looking at the numbers that the larger support that’s out there has not trickled down to Latina/o artists and organizations, so you don’t see that support in those areas, the initiatives to ensure that equability,” says Azcona.

These issues of funding and the pipeline tie into another problem that Boffone sees of the Texas theatrical territory for Latina/o artists, that Texas produces great stage artists, actors and playwright, but then they find they must leave in order to continue to create. “The artists don’t necessarily want to leave Texas, but they feel like they have to leave at a certain point. All of the ones I know still have a strong connection with Texas, but they aren’t necessarily wanting to come back because they can’t do the stuff they do in Texas,” describes Boffone.

With an eye on keeping Latina/o artists in Texas, Boffone has become the associate producer of Sin Muros, the just-announced Latina/o Play Festival at Stages in Houston. While Stages is one of those companies that has consistently produced a Latina/o play a season, Stages artistic director, Kenn McLaughlin wanted to do more, explained Boffone.

“Kenn recognized the gap; he recognized what he wanted to do but he also recognized that he needed help to do it, and so he brought in five of us who actually know the community and know the artists. It’s being done in a way that’s speaking with the community.” Boffone goes on to explain the objective of the festival. “It’s focused on Latina/o voices in Texas, locally and regionally and supporting emerging artists and creating a relationship between people who leave and people who stay.”

The festival will occur in February, 2018 during the regular season run of Philip Boehm’s Alma en venta (Soul on Sale), and includes developmental workshop readings of new work by Bernardo Cubria, Tanya Saracho and Mando Alvarado, along with the world premiere production of Purple Eyes, Josh Inocéncio’s solo-show. Boffone hopes this festival will be one step for a much longer journey. “What we’re trying to do is create a space where people can come together and meet people and maybe a theater company actually emerges from it, or maybe at Stages a Latina/o theater company that uses their theater twice a year.”

When I asked Azcona if he had one wish for Latina/o theater in Houston, his idea was not too far from Boffone’s. “A successful company here. To have a company that has the actors, playwriting talent and with a space that could really bring the work to life, and the funding to do it on a regular basis to build an audience, because I really believe the audience is there.”

Lozano is ready to dream even bigger: “A network of healthy Latina/o theaters in several cities, strong enough that we could hire each others’ actors or bring each others’ shows into town and potentially have festivals.”

Until then, they keep creating. The last production of Cara Mía’s season, the world premiere of Caridad Svich’s De Troya, a kind of wild urban fairytale, which Lozano directed, runs through May 14. “We still produce theater; we still strive to look for the best and create the best plays. We create good work. In spite of these challenges we keep going.”