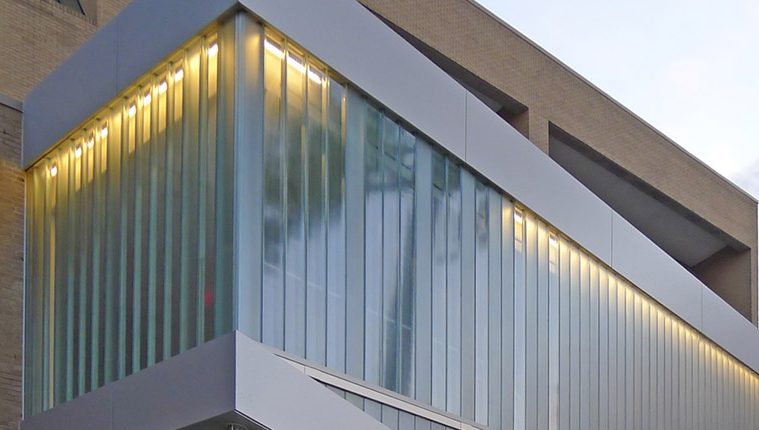 The University of Houston’s Blaffer Art Museum has long been awkwardly positioned in Houston’s art scene, both because of its tucked-away location and from the difficulties imposed by its quirky floor plan on the first and second floors of the main campus’s Fine Arts Center.

Ever since it opened in 1973 – one year after the massive and not a little foreboding Fine Arts Center, designed by Caudill Rowlett Scott, was inaugurated – visitors have entered via the internal courtyard of the arts building.  It had no external presence save a tasteful (that is to say, hard to see) sign on the front of the windowless arts building.  After parking, visitors literally had to walk around the building to enter the museum, whose exhibition spaces were either divided from within by a disruptive staircase or, in the case of the upstairs galleries, from each other due to the location of the double-height downstairs gallery.

In February 2011, Blaffer announced it had hired the trendy New York-based husband and wife architectural team of Dan Wood and Amale Andraos, whose firm is called WORKac (the last two letters standing for “architecture company”), to solve those problems on a modest $2 million budget.  (Gensler served as the architect of record.)

In the 1990s, Wood and Andraos both cut their teeth at the avant garde and conceptually rigorous firm OMA (Office for Metropolitan Architecture), headed by the Dutch architect Rem Koolhaas.  Much the way that the atelier of German architect Peter Behrens employed Ludwig Mies van der Rohe, Le Corbusier, and Walter Gropius in the 1910s, OMA has functioned as an attractor and incubator for the best talent of the current generation of up-and-coming modern architects.  (Zaha Hadid was an early member of OMA, and in Houston, Sarah Whiting, the dean at the Rice School of Architecture is another alumna.)

The conceptual apparatus that Koolhaas (and his many collaborators) have devised to guide their work revolves around a radicalized functionalism.  They analyze the project requirements and recombine them in unexpected and often seemingly naïve ways to produce designs that begin to question underlying and unspoken assumptions about architecture and the way people interact with it.  The only problem I see with this strategy is that in practice it tends to produce episodic buildings – a cool thing here and another one over there grafted onto some sort of standardized armature.

Wood and Andraos seem to have taken both the good and the not-as-good from their tenure at OMA. The major architectural statement is a monumental glass and steel stair that projects from the front elevation of the Fine Arts Center.  It replaces a once-prominent stair that used to come up in the middle of the galleries, apparently causing curatorial problems.  The new stair has cool angles and is clad with channel glass in a mixture of semi-transparent and frosted sections.  It contrasts with the solid beige brick wall from which is projects and doubles as a portico for the new front entry doors.  At night, when lit from inside, the contrast is even more dramatic.  A column supporting its uppermost corner is encased in a triangular concrete wall that visually blocks a loading dock directly next to the entry and serves as a background for new museum signage.

Inside, the central, double-height gallery still separates the two upstairs exhibition spaces. Previously they were connected by a narrow hallway that ran in front of the museum staff offices, which are now private. Exhibitions that were on view in the upstairs west gallery often continued into the east gallery, which also sometimes hosted small, stand-alone shows. Now, although the upstairs galleries are still linked by a narrow corridor, it has at least been moved to the front of the gallery space, parallel to the new stair.

The former east gallery has been divided into two dedicated spaces: a media gallery, which director and chief curator Claudia Schmuckli says will present curated film and lecture series developed in conjunction with the exhibitions, and a studio for Blaffer education programs, including the Young Artists Apprenticeship Program, summer arts workshops, and year-round hands-on art-making workshops for University of Houston students.

While moving the stairs may have eliminated some curatorial headaches, the problem created by the downstairs double-height gallery’s interruption of the upstairs galleries has been shifted rather than resolved. Under the new design, when a visitor reaches the second floor – for example, during the Tony Feher survey that will open October 13 and take up both floors – they will first encounter not the second part of the show but the media gallery and its related programming. Perhaps, had the taller gallery been shifted over to one side or the other, the two upper galleries could have been linked more effectively.  I suspect that this decision was primarily a function of the modest budget that probably did not permit such large-scale structural changes to the space.

On the ground level, a new hallway connects the front entry with the existing courtyard entry, and the old reception desk area has been repurposed as a seating nook and kitchen with a pass through serving door that will be used during receptions and other functions requiring catering.  The ceiling of the hall has fluorescent light fixtures applied seemingly at random, the arrangement of which, according to Blaffer spokesman Matt Johns, was inspired by Mikado, a Japanese version of pick-up sticks.  The original dark colored brick pavers have been removed from the floors and new, light grey concrete has taken their place, which seems to be current standard floor finish for new art exhibition spaces.

Outside, in the areas directly in front of the new exterior stair and in the courtyard, new planting and paving was designed by the New York landscape architecture firm, SCAPE (one of whose two partners, Kate Orff, formerly worked at OMA).  The landscaping, at least in the renderings, continues the use of triangle-shaped sections to demarcate different functions—seating, an outdoor theater, and walkways.  So far, only the work in the front of the museum has been completed.  Johns says the courtyard scheme is on hold because the university decided to include it in a larger landscaping project that would also rework the green space in front of the nearby Mitchell Center and the Moores Opera Center.

How UH arts facilities fit together once Blaffer’s and its neighbors’ landscaping projects have been completed remains to be seen, but for now Schmuckli and WORKac deserve credit for mostly delivering on ambitious goals for a shoestring-budgeted project.