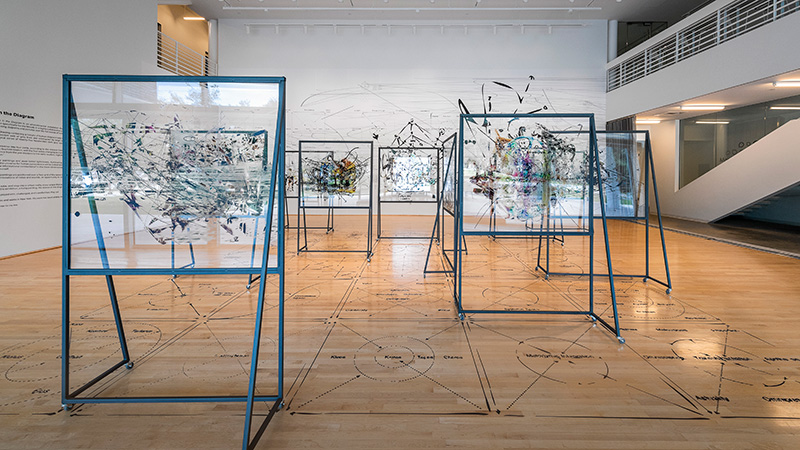 Boundless Quantum and Galactic Space: ‘The Demon in the Diagram’ at the Moody Center

Millennia before mapping the universe became the purview of the scientist, the first artists scratched marks, lines and shapes onto cave walls, perhaps to make some sense of the world around them through pictorial representation. Were those ancient scribbles art or were they diagrams, attempts to sketch out reality to better comprehend it? In the new exhibition at Rice University’s Moody Center for the Arts, The Demon in the Diagram (through Dec. 22), artist Matthew Ritchie makes a case that the two were and can be one and the same as he explores humanity’s attempt to diagram our place in the universe.

Consisting of multiple paintings of diagrams constructed and then collapsed into expressionistic explosions of color on walls, light-boxes, moveable transparent screens and carpet, as well as an immersive virtual reality program, Demon in the Diagram spans the Moody Center Central and Brown Foundation Galleries physically, but stretches out into boundless quantum and galactic space metaphorically. 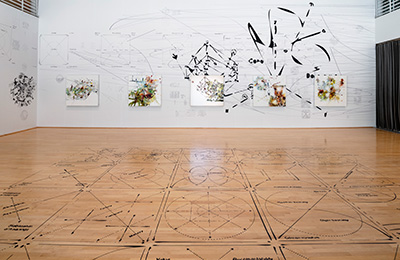 The exhibition begins with a diagram of the 8th-7th century BCE Greek poet Hesiod’s creation story from his Theogony and the four forces of his primordial cosmos: chaos, which comes before everything else; nature, or the aspect of the universe we can see; eros, our desire to populate nature; and Tartarus, the eternal abyss where our souls live. From this first diagram comes the concept of the demon.

While the contemporary understanding of a demon might be influenced by many world religions then filtered through horror movies, for some ancient Western cultures, the Latin daemon and Greek daimon were the natural spirits that all creatures, including humans, possess.

“It’s about this idea of what connects you to forces larger and more complex than yourself,” explained Ritchie, in an early walkthrough of the exhibition. “For me, it’s very much as an artist alone in the studio, there’s a voice saying ‘Time to make work.’ We all have it. It’s you and it’s kind of not you.”

From that first ancient Greek vision of creation, Richie chronicles the evolution of human understanding of the world through our diagraming of its parts. That diagram progression culminates in the second gallery with some relatively new insights into nature and the cosmos from diagrams of the Bose–Einstein condensate, a fifth state of matter, to the Holographic Universe theory, an offshoot of String Theory. In between, the exhibition recreates diagrams of ancient Babylonian star signs, networks of contemporary international corporations, maps of global warming trends and collapses Einstein’s Theory of Relativity into brush strokes of color. 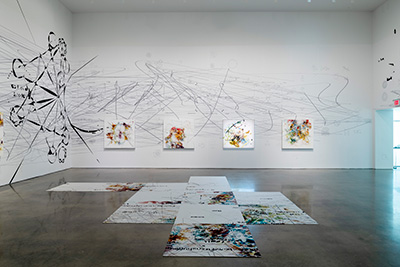 Viewing it in its entirety, the exhibition becomes a history of 8000 years of human knowledge through diagrams and portrays the changing vision of our place in the universe.

“I did all this research on the history of the diagram and it turns out what we care most about is the universe and us. The universe doesn’t mean anything unless we make it meaningful.”

With thousands of years of human understanding through the diagrams, the exhibition seems vast, but Ritchie doesn’t think it overwhelms, especially when we all carry a shiny, new kind of demon in our pockets that can call up all of human knowledge for us in seconds.

“I feel people already do know everything. Their life experience is incredibly rich. They’ve already passed this kind of information horizon. What I’m trying to do here is show that it’s all connected. It’s a huge series of connections and we’re all part of this conversation going back with all the other people who ever lived, for better and for worse.”

And to reinforce our continued placement of ourselves, demons or otherwise, within these diagramed systems, the exhibition asks viewers to become participants, stepping into these schematic representations and changing and altering them. 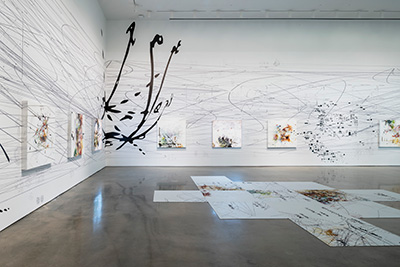 Visitors to the Moody are encouraged to move those transparent screens around the first gallery, thereby triggering different soundscapes created by Ritchie’s longtime music collaborators, Kelley Deal, lead guitarist of the Breeders, and composer and clarinetist Evan Ziporyn. As we push these sculptural, painted screens, the movement activates music that can be played in different combinations, creating 2,5000 minutes of composition.

“Truly, it’s an open invitation at the university and public to come and play the diagram game, push the screens around, reorganize history until you’re happy with it,” described Ritchie.

The other interactive portion of the project is a VR experience allowing participates to dive into the diagrams and more Deal and Ziporyn music as Ritchie narrates the journey. Even for this experience, Ritchie asks us to remain active, putting on a painted smock and ornately covered headset, so that those outside the VR environment will see those inside almost as dancers spinning on the painted carpets on the floor.

“The initial impulse was that I wanted to make people who came into the show become part of the show, same with the screens,” explains Ritchie, but this impulse merges with a major theme of the art. Though thousands of years removed from those primitive artists/scientists marking up rock walls, trying to make pictures that explain our place in the world, we’re still on the same quest for understanding.

“Everybody is a part of this one crazy enterprise and we have to figure it all out together. This exhibition does not figure it all out. It poses the problem, how difficult it is when you put it all together.”

As not just the creator of the exhibition but the Leslie and Brad Bucher Artist-in-Residence, Ritchie will work with Rice students from a variety of disciplines over the next few months. The Moody Center offered a special public programming, including dance and music performances on Oct. 27 from San Francisco-based choreographer Hope Mohr and her company and live music from Deal and Ziporyn.

The mission of the Moody Center has always been to foster conversation between the arts and other fields, and director Alison Weaver believes Demon in the Diagram speaks to that mission artfully.

“Matthew’s work transcends the boundaries between art, science, humanities,” Weaver finds. “He thinks in atemporal gestures. He thinks across time and place and across disciplines to these bigger questions of how we understand our world.”