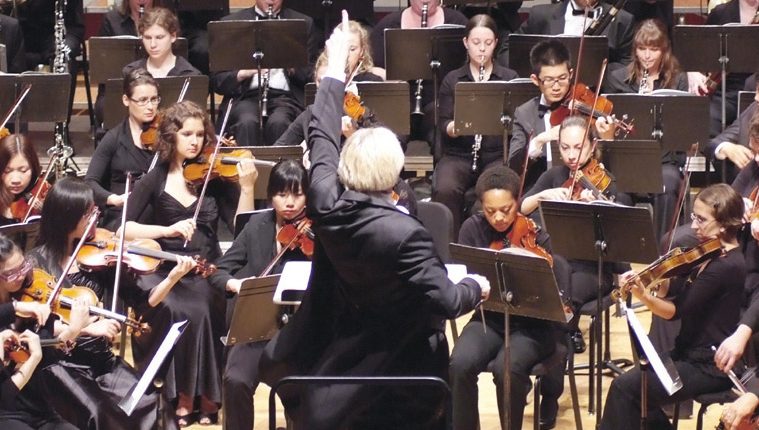 Build it and they will come

Never underestimate the power of a cowboy conductor. That very image served as the poster for the first Immanuel and Helen Olshan Texas Music Festival (TMF), now in its 22nd year.

“Actually, that poster is kind of iconic, and I still have people that call me looking for a copy of it,” says Alan Austin. Now in his 15th season as General Director of TMF, Austin, who was a violinist at the festival in its first season, has overseen the organization’s growth from a virtually unknown event to a hot bed of musical activity for some of the best and brightest musical minds from around the United States and beyond.

When I was accepted as a fellow at TMF during Austin’s inaugural year as General Director in 1997, I was mildly pleased. Now, an invitation to participate in the festival means something entirely different. Today, they attract the very best young talent from across the globe.

With a 95-piece orchestra as its crown jewel, TMF now also boasts a world-class faculty with separate jazz, vocal, piano, and guitar institutes. It offers performances in its home locale of the Moores Opera House, in addition to run-outs to Texas A & M University and the Cynthia Woods Mitchell Pavilion throughout June.

“It’s been a little bit of a ‘if you build it they will come’ philosophy,” says Austin. The late Immanuel and Helen Olshan wanted to create a festival experience that was comparable to that of Tanglewood or Aspen, and upon their deaths, their foundation enabled Austin to offer full-tuition scholarships to each student.

“It also puts the musicians on an equal footing when they are at the festival,” Austin says. Once the musicians arrive in Houston they go straight to work on rehearsing, as opposed to wasting time establishing their rank and position in the festival based on the amount of scholarship they did or didn’t receive. Consequently, there is no warm-up concerning concert programming. This season, the orchestra dives right in with a performance of Beethoven’s grand Symphony No.9, alongside Paul Hindemith’s Symphonic Metamorphosis of themes of Carl Maria von Weber.

The festival boasts many notable alumni. In addition to at least 10 players who populate the various ensembles in Houston, former TMF participants include representatives in many major national orchestras. The current principal cellist of the Academy of Ancient Music and violinist Dan Zhu, who wowed festival participants and fans when he first attended the festival in 2001, has since gone on to have an important career as a soloist.

Championed by Christoph Eschenbach, Zhu recently performed a program of Mozart sonatas with the former Houston Symphony Music Director at the Kennedy Center in Washington, D.C. After a stop at TMF for a performance of the Violin Concerto by Erich Wolfgang Korngold, he heads to the Tanglewood Music Center for a performance with the Boston Symphony Orchestra.

Austin and TMF have also displayed an extraordinary commitment to living composers as well. Most notable was a recent co-commission with the Atlanta Symphony Orchestra of the Symphony No.1 by composer Christopher Theofanidis.

TMF gave the second performance of the piece, which has since been commercially recorded by the ASO. Austin also notes that the festival has commissioned at least five other major works for the orchestra, as well as a series of overtures and a large-scale chamber work by David Ashley White.

In 2016, TMF will combine forces with five other entities to commission a song cycle to feature Baritone Timothy Jones and will be written by the recent Pulitzer Prize-winning composer Kevin Puts.

As the years have gone on, the festival has also committed to developing its fellows as young orchestral players. Recent offerings include mock auditions and career seminars that focus on something other than playing an instrument. (Full disclosure: I organized one of them in 2008.) Austin is particularly pleased with offering Yoga For Musicians. He insists that his staff attend that class.

While it’s difficult to imagine that there is anything other than an overabundance of heat and humidity happening in Houston in June, TMF sizzles with great music to the tune of nearly 50 concerts throughout the month. Whether it’s chamber music performed by the world-class faculty or orchestral music by the elite young fellows, you will not want to miss out.

Austin says, “We’ve reached a point where the orchestra is so good, that we want to share with Houstonians.”