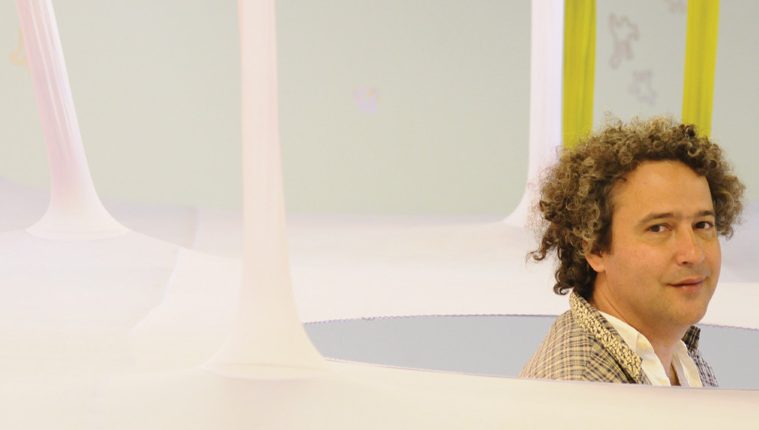 Ernesto Neto is a contemporary Brazilian artist widely known for spectacularly huge sculptures that invoke adjectives like “seductive” and “glorious” — they’re meant to awaken our primal selves by inviting interaction. “Cuddle on the Tightrope,” currently on view at the Nasher Sculpture Center, does exactly that. The show occupies two spaces. One is Neto’s selected arrangement of sculpture from the center’s collection and the second is “Kink.” The latter is constructed of draped netting supported by heavy metal arches; the entire piece is bisected by a walkway that’s made of small plastic spheres held together by yet more netting. It does, indeed, “Kink” and the topography of the piece is injected with giggle-inducing excitement when visitors walk through it.

Neto takes mischievous pleasure in pointing out that “the spheres (forming the walkway) are really nothing but air” and, thus, art enthusiasts, whether they realize it or not, are unwittingly seduced into doing a notoriously improbable thing — walking on air. In an interview, he said that his first interests lay in “astronomy and the micro and macro.” In fact, the artist addressed so many diverse topics at Mach speed that he gave the impression of a highly enthusiastic professorial type who fully embraces both somatic import and playful intellectualism. His mind operates on all cylinders — all the time.

At one point, he jokingly ranted against Plato and pleaded that “we need to be more Aristotelian!” Thus, it’s not surprising that his sculpture is suggestive of bodily shapes and invokes sensate responses. If we open ourselves to it, his work tricks us into bypassing our overrated noggins and heading straight for the good stuff — the abundantly fun and sensuous world that delights us with shape, texture and form. To use Neto’s analogy, his work jettisons the Platonic in favor of the “really real,” i.e., the Aristotelian. (It’s the difference between looking at a map and exploring terrain by driving through it.)

The Nasher’s Chief Curator, Jed Morse, noted that the show “expands on where we were in the collection.” He added that its site-specific quality was of special interest and said that Neto “draws on the Brazilian work of the 60s — the ‘New Objectivity.’” The latter is known for a collective exhibition held in the Museum of Modern Art, Rio de Janeiro which was organized by artists and critics, including:  Hélio Oiticica, Lygia Clark, Lygia Pape, Glauco Rodrigues, Sérgio Ferro and Waldemar Cordeiro, among others.

An inside look at the new Ernesto Neto installation at the Nasher Sculpture Center.

For Hélio Oiticica, there was important work to be explored that lay beyond traditional platforms (painting and sculpture) that made use of environmental structures. He encouraged a form of art that encompasses visual, tactile and bodily participation. This is an idea that obviously still holds allure for Neto. In fact, he’s taken it to new and more sophisticated levels.

To borrow from the superb exhibition catalog written by Morse, there’s a “juxtaposition of the strong and the fragile (that) recurs throughout Neto’s work, and, as the artist has said, serves as a metaphor for the human condition.” This notion beautifully frames the existentially charged name of the show. After all, what else do we do during the span of our lives but “Cuddle on the Tightrope”? We move inexorably from birth to death — and between those two mysterious chasms we cling to families, lovers, friends and affiliations. When this came up in conversation with Neto, he said, “Ah, yes! I’m glad you said ‘existential!’” Then he began reading a series of text messages from a (highly flirtatious) woman who seemed to articulate the same conclusion. I only mention this because that’s the path a conversation with Neto takes. Nothing is linear — which is great. When you bring up any topic, rest assured you’ll be enjoying a rambunctious, highly intelligent “scenic” route. It will likely be a mashup of math, physics, astronomy, aesthetics and unmitigated enthusiasm.

While Neto is infectiously lively and affable, he also comes across as generous and gentle. Again, to quote from Mr. Morse’s catalog, the artist states:  “My goal is to embrace people, take care of people, carry them as if I were carrying a baby. The space in which I work is pre-language space. It is an area for understanding the physical world, texture, weight, color, temperature, joy, sadness.  It is the space of affective relationships with the world.” Thus, Neto gives us a working definition of one specific form of beauty articulated by someone very much in love with the world.

Ernesto Neto: Cuddle on the Tightrope, May 12 thru September 9, 2012 at the Nasher Sculpture Center in Dallas.

The Neto exhibition is even more substantial proof — not that it is needed — that the Nasher Sculpture Center is a glorious addition to Dallas and, in fact, it’s a venue that would be a privilege to visit in London or Paris. Thankfully, it’s just a short drive away. More importantly, it’s also one more thing to which we can cling while we “Cuddle on the Tightrope.”

Adjacent to the gallery housing “Kink,” Neto has selected a stellar group of art from the Raymond and Patsy Nasher Collection. It includes work by Paul Gauguin, Constantin Brancusi, Naum Gabo, David Smith and Cy Twombly, among many others.

One sculpture is especially unusual. “The Flesh of Others” is the work of Italian artist Medardo Rosso, a contemporary of Auguste Rodin. It jives beautifully with Neto’s sense of lushness and highlights his fondness for softness and emerging bodily forms.

Alberto Giacometti’s “Spoon Woman” (Femme cuillère) is another work picked by Neto. It captures a gorgeous bodily sway and sinuousness and that, again, is the hallmark of Neto’s fascination with the tactile world.

Sol LeWitt’s “Modular Cube/Base” explores grids and cubes in much the same way Neto explores intertwining rope. Both explore the way negative and delineated space work together to explore how we experience art, epistemological concerns and the manner in which we interact with the world.