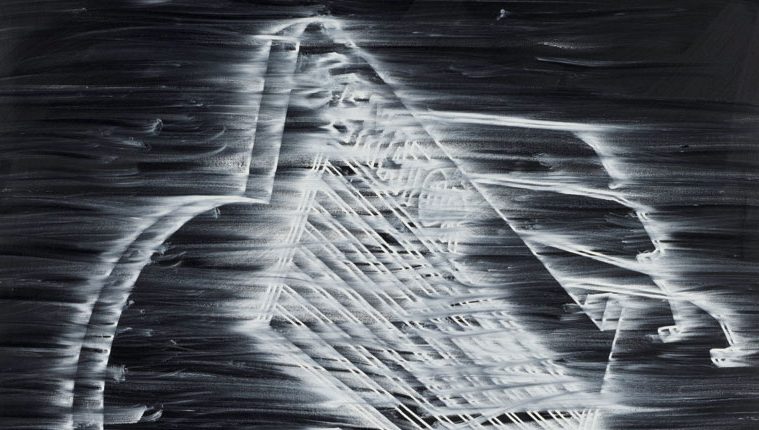 Chalk it Up to Creativity

New York-based artist Gary Simmons is known for his “erasure” technique, which he began using in the early 1990s. Initially creating semi-erased works with chalk on blackboards, the artist has evolved to works on paper, paint on canvas, and murals that mimic smudged chalk. The resulting blurred and ghostly images often refer to intersections of pop culture, race, and class. History’s subjective bent is also a strong theme within Simmons’s work, and the simple nature of chalk lends itself to his artistic concerns—especially in its suggestion of basic communication, the human hand, education systems, and of easily erasable or altered information.

The monumental work Subtlety of a Train Wreck, 1998, included in this exhibition, is comprised of blackboard paint directly on the gallery wall serving as the ground, with the image rendered in chalk. It portrays the split second before two trains collide, or the calm before destruction. Subtlety, as with much of Simmons’s work, connects to a cinematic scope, evident in its scale (it is the size of a movie screen) and in its depiction of a suspenseful moment just before the high drama. Simmons was also attracted to the phrase “subtlety of a train wreck” and what it implies on a personal level: “The crash in this drawing is the occurrence that is about to happen. It reflects on the self in a way that I was interested in—the idea of feeling like, or being in a situation that is a train wreck.” This exhibition marks the first time Subtlety has been produced as a mural since its premier in 1998 for the artist’s solo exhibition at Margo Leavin Gallery in Los Angeles.

Starlite Theatre, 2010 comes from Simmons’s drive-in movie series and depicts the sign from Dallas’s Starlite Drive-In in a twelve-foot-long, black-on-black painting. The Starlite was one of the few theaters in Texas to permit black patrons in the 1950s.  The artist’s spotlight on this theater suggests the conundrum of American history because, on the one hand, the 1950s theater sign conjures memories of mischief and freedom for a certain generation,while on the other hand, it speaks to our history of segregation and discrimination. Like much of Simmons’s imagery, this work signifies an idealized past that also has a dark history.

Simmons’s most recent work, In This Corner, 2012, from his Construction Site Series, is made to look like a construction site barrier littered with flyers that announce a championship boxing rematch from 1938. The event was the most-listened-to in radio history, with seventy million people tuning in to the “fight of the century” between Joe Louis, a black American, and Max Schmeling, a German hailed by the Nazi party. It symbolized the differences in countries, races, and political ideologies of that era. This work addresses Simmons’s artistic concerns on multiple levels: it refers to a historic American event; it implies progress (the construction) taking place; but the progress is hidden behind barriers. ”We don’t hold on to architecture in the same way that Europe does,” Simmons has said. “Instead, paths get torn down. It’s a different historical concept that values progress over the past.”