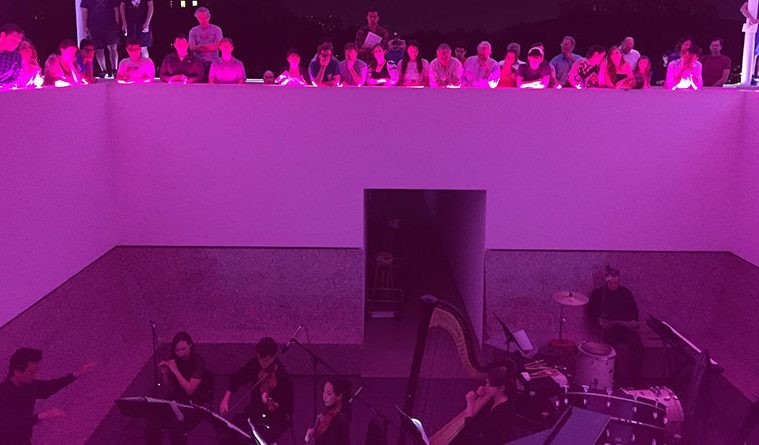 Loop38 in electrolab at the Turrell Skyspace at Rice University, March 21, 2017.
Photos by Sherry Cheng. 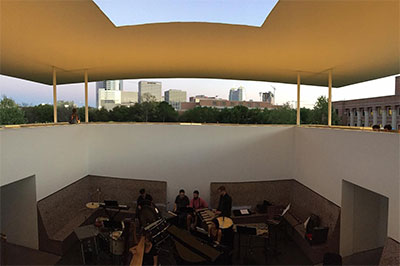 When soft twilight yields to clear night, the Turrell Skyspace at Rice University is illuminated with a continuous diffusion of colors that ebb and flow around the central opening to the darkening sky. James Turrell has compared programming the lights to composing, anticipating our emotional response to music might parallel our response to light and its changing colors.

On March 21, Loop38, the young and dynamic New Music collective founded by Rice University Shepherd School pianist Yvonne Chen and conductor Jerry Hou, in its ambitious and ground-breaking inaugural season, presented a program of spectral beauty perfectly suited to the shifting spectrum of light at the Skyspace. Aptly titled “electrolab,” the concert included three works that can all be roughly characterized as “Spectral Music,” by which I mean any music that features timbre as a primary element in its language and structure, and music that merges acoustic sounds with electronic sounds, resulting in a kaleidoscopic collage of “real” sounds–Kaijia Saariaho’s Lichtbogen (1986), Olga Neuwirth’s Torsion (2003), and Ashley Fure’s Feed Forward (2015). 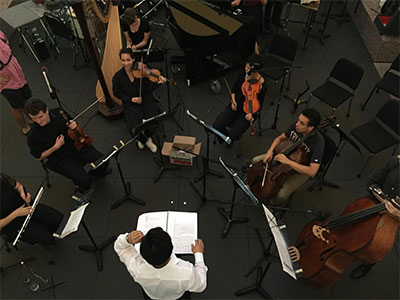 Saariaho’s Lichtbogen, for nine instruments and live electronics, was inspired by visions of the Northern Lights in the Arctic sky. From faint breaths on the flute, to sparse scattered notes on the piano, to the fragmented, shimmering tremolos on the strings, to the metallic, crystalline pings of the cortales, the air became rarified, and one easily enters a dreamlike trance, held still by the synchronicity of merging colors and sound textures. Colors became sound and sound became color. The music never overwhelms the senses, even at its most intense moments, when bows screeched over the bridge like sea sirens wailing, repeated high notes on the piano struck like hammers on hard wood, and low strings growled in waves. The music never lost its transparent luminosity, as individuals in the ensemble created a spectral web both refined and unified, and even the electronic component transpired into the ether with subtlety. 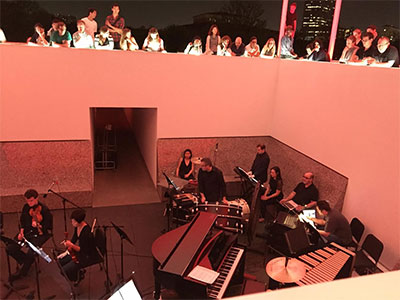 Olga Neuwirth’s Torsion, for Bassoon and Tape, is an enormously difficult piece for the bassoonist, taking the instrument to the limits of its capability. Bassoonist Ben Roidl-Ward absolutely rose to the challenge and brought the house down with his brilliant performance. From the continuous circular breathes that sustain the expansive and dynamic opening low note, to the precise and incisive staccato bursts, to the furious speed of passages that run the entire range of the bassoon, to the dizzying array of crazy rhythms, to the effortless production of cool multiphonics and soulful slides, Roidl-Ward owned the piece. Here again, the use of the composer’s field recordings and other electronic sounds subtly but effectively created an alternative atmosphere. At one particular moment, when a quaint carnival tune sounded from the distance, I felt a sense of familiarity and nostalgia, an emotional response to a mostly technical piece. 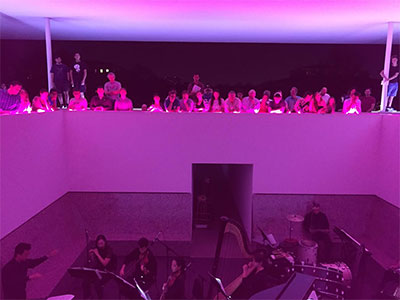 Ashley Fure’s Feed Forward, for large ensemble, was the most sonically adventurous piece of the evening. Percussionist Brandon Bell literally scared the wits out of me as I jumped in surprise and grabbed my companion in the very first moment of the piece–the metallic shock of metal-tipped mallets on brake drums sent shivers up my spine at every turn. At first, the sound palette shifted in recognizable patterns, then progressively the acoustic material mingled and merged. Sound effects had me bending over the balcony, looking for their sources, a shimmering from cymbals being bowed at the edge, a scraping of slate, a saxophone emanating percussive breathes. The droning from winds or strings, dovetailing in and out of the sonic landscape, reminded me of chanting lamas on the Tibetan Plateau. A high whistling sound–was that harmonics in the strings or the piercing cry of reeds? The horror-inducing tremor coming from the bass drum, I only found out later, was the gliding of a super bouncy ball on a skewer moving over the skin of the drum. Perhaps that was the intent of the composer, this morphing and fusing of sounds that made characteristics of individual instruments disappear, dissolving barriers and limitations.

I come to new music concerts in venues like the Turrell Skyspace to experience the moment, to surrender myself to the mysteries of sound. Loop38 took me there with a brilliantly conceived program. It was music from an immense space, sometimes ethereal, sometimes earthy, illuminated by our own individual realities. It is music that makes me aware and awake.

Loop38’s season closer on May 2 will feature Georg Friedrich Haas’s hour-long work for 24 musicians, in vain (2000), a cult masterpiece of our time, to be performed in the Rothko Chapel.