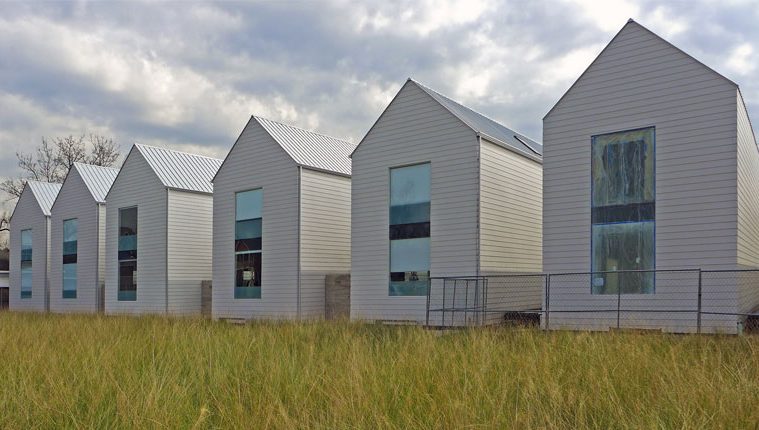 A handful of distinctive recently built houses might well be the harbinger of an intriguing new direction in Houston’s domestic architecture. Recalling the urform of a child’s drawing, unhealthy these “Monopoly Houses” are a compelling alternative to the mostly white, stucco-clad boxes that have stood for “modern” architecture here during the past fifteen or so years.

More serious than playful and intensely rigorous instead of deceptively casual, these houses are simultaneously comforting yet alien in Houston’s urban landscape. Visually, they are characterized by spare, geometric forms; tall, pitched roofs; and long, narrow floor plans that fit onto the small lots of the inner city neighborhoods where they have so far been built. Conceptually, they evoke the abstract, primal image many of us seem to imagine as the essence of domesticity that is for some reason never what the market-driven homebuilding industry actually sees fit to provide.

This examination of the symbolic nature of dwelling spaces suggests a resurgence of the ideas, if not the actual forms, of postmodernism, a trend that is still reviled by many architects. Though its origins are now mostly forgotten after having been around for nearly fifty years, postmodernism first served as a necessary corrective for the abuses of modern architecture and planning in the postwar years. The effects of freeways ripped through historic hearts of cities, the mass clearance of old building stock for nothing more than parking lots, and new buildings that were at best barely tolerated by the public, but often hated due to their breathtaking insensitivity to basic human desires, rightly gave modern architecture and the authoritarian culture the produced it a repellent reputation during the troubled 1960s. However, as postmodernism itself became a tool of the dominant corporate culture, the same abuses as its predecessors were again heaped on the general public, the only difference being that it came wrapped in paper-thin, historicist veneer.

Houston architecture’s most significant experiment with an extended meditation on the genius loci produced a body of work known locally as the “Tin Houses.” These buildings, which first appeared in Houston’s West End during the mid-1970s, were unprecedented because they made explicit references to the vernacular urban environment. Up to this point architectural culture in Houston had always been imported rather than developed locally: The exotic, Byzantine-inspired architecture of the Rice University campus, whose master plan and inaugural buildings were devised by the Boston architect Ralph Adams Cram in 1910, is one of the best-known examples of this preference. In this respect, Houston has always differed from other cities in Texas like San Antonio, Dallas, and Austin, where architecture has usually been expressed in terms of regional characteristics.

Just as with the Tin Houses, Houston’s Monopoly Houses exist firmly outside of the architectural mainstream. In fact, most of their designers are not registered architects, and two of them did not even receive an architectural education. What’s more, at one time or another each has also acted as the contractor in order to keep costs down and to maintain aesthetic control over the final product.

The first designer to work in this mode seems to have been Brett Zamore. For his thesis project at the Rice School of Architecture in 2000, he rehabilitated an anonymous 1930s-era shotgun house in the Fifth Ward. Zamore’s experience with the clarity and simple logic behind this house type convinced him of its applicability to his own commissions. In 2003, he completed a house that he memorably dubbed the “shot-trot.” It was long and narrow, set on concrete piers above the ground, and capped with a tall, pointed gable roof running its length. Sliding glass panels protected by external, moveable louvers allowed the central section of the house to be opened either visually, or physically when the weather is good, similar to a dogtrot, or breezeway, house.

After building the first shot-trot house, Zamore methodically explored the serial nature inherent in this type by creating a system of kit house plans that expand logically in size and complexity. In 2008 he designed and built three one-story shot-trot houses on the northern edge of the West End. In 2011, for a different developer, he designed two, somewhat larger two-story shot-trot townhouses in the Brooke Smith addition near Houston Heights that begin to show the adaptability of the basic concept to different contexts as well as price points.

A second example is the Row on 25th, a group of nine rental houses designed and built by Tina and Matt Ford in the Houston Heights. The Fords have business-school degrees and had no formal experience with architectural design or construction until they remodeled a house they owned. Finding this experience deeply satisfying, they began to do general contracting projects until clients began requesting design services. Now Matt Ford says almost all their work is design/build.

The Heights is experiencing a somewhat surreal displacement of its actual stock of historic dwellings by new, mostly speculative, houses that look even more historic than their predecessors. The Fords have creatively responded to this rapidly changing context where the only constant is an ahistorical historicism: Rejecting the literal but badly mangled evocation of Victorian and Creole houses surrounding them, they instead sought sanctuary in the purity of typology. In the latest edition of the Houston Architectural Guide, the historian Stephen Fox writes, “Tina and Matt Ford may well rehabilitate postmodernism” with this row of nearly identical, two-story, white painted houses, each with a single, double-height window facing the street and set behind a dense carpet of native wild grasses. The effect is enigmatic and eerily recalls Andrew Wyeth’s seminal painting, Christina’s World. In their uncompromising starkness, these houses suggest a poetic rumination on the nature of stability and change.

Scott Strasser and David Guthrie opted for the conceptual purity of a single gable roof when designing a house currently being built by Strasser in Boulevard Oaks, a neighborhood with design restrictions that prohibit the use of flat roofs for new construction. Like the others, this house has two stories and is long and narrow in plan. A roof deck concealed behind the gable front affords views across the 59 Freeway towards downtown a few miles east.

A rain screen of untreated cedar boards that will eventual weather to a soft gray color wraps both the walls and roof of the house. The boards are strategically manipulated at windows and the roof deck to allow for the penetration of different amounts of light to the interior spaces. The physical sense the house evokes can only be described as intense. Here, the familiar gable form is destabilized by the tendency towards abstraction coupled with ultra-precise detailing.

What animates these houses is the dialectic process their designers use to navigate between cliché, sentimentality and nostalgia on the one hand and precision, rigor and discipline on the other. The type of city these houses presuppose may actually be one in which we want to live. Their simple geometric shapes and readily identifiable references to domestic architecture are deeply satisfying on many levels.

Their adaptability to different sized floor plans as well as their inherent seriality also suggest that they could (and should) be deployed in a range of neighborhoods much the way that semi-anonymous urban housing has been in the cities that we find so memorable and visit on vacations. After all, what would London be without its Georgian terraces, Philadelphia without its red brick row houses, New York without its brownstones, San Francisco without its Painted Ladies, or New Orleans without its Creole cottages? As individual works of architecture, Houston’s handful of Monopoly Houses cannot pretend to address the entrenched institutional mechanisms—from predatory banking practices to misguided federal, state and local government policies—that make this city the unlovable hodgepodge it is now. But they certainly provide—with startling clarity—an option for a different future.