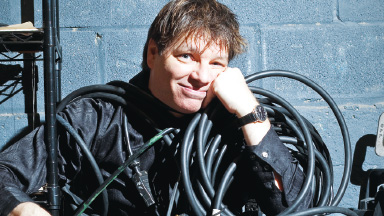 Talking a mile a minute with hands waving, troche Stages chief Kenn McLaughlin, drug charges up his audience for the opening of the season.

“What you are about to see will only happen once,” he passionately tells the opening night audience for “The Blonde, the Brunette and the Vengeful Redhead.”

Stages is one busy place this month, with side by side productions of “Panto Red Riding Hood” and “The Winter Wonderettes.” A + C editor Nancy Wozny caught up with McLaughlin to hear about life in the Stages trenches.

A + C:  How did you end up in Houston, running a popular mid-size theater company?

KENN McLAUGHLIN:   The protection of angels. In 2001, my partner moved into management with Continental Airlines, and we transferred from Cleveland to Houston. At the same moment, Stages was searching for a managing director. I interviewed for the job on April 15 and was at my desk for my first day on April 21, and I still lived in Cleveland. It was very surreal and a HUGE blessing. Five years later, the board offered me a position as interim Artistic Director when Rob Bundy decided to move on and about four months into that period, they offered me the job of Producing Artistic Director. This April, the board renewed my contract for five more years. Every step along the way, I truly view as a gift and an honor — I’m one of the luckiest guys anywhere.

A + C:  It’s mighty crafty of you to do a “Red Riding Hood Panto” with a major feature coming out. Will the wolf be in drag? How is little red panto-izing so far?

KENN McLAUGHLIN:  The Pantos are so much fun artistically for all of us, because they really free us up and tap into the childlike spirit of the staff — we all just love them. And, while I’d love to claim crafty planning, the fact is that, when we hit with “Cinderella” a few years ago and realized we have found something special for the community, I planned out four years ahead with commissions for the works assigned all that time ago. “Red Riding Hood” was determined two years ago. Genevieve Allenbury — who had been so key in my Panto education — was offered the commission on this one, and the only thing I told her was that I wanted to do disco — she loved the idea and simply ran away with it. The plot that developed was a collection of ideas, and who would be the dame was totally up to her — turns out the “dame” role is Granny — and in this case, actor David Wald. I really don’t ever want this to be “drag” per se — it is a different style, and David is going to be hysterical. The Wolf is a super meany, and will be played by Justin Doran, who is one of my favorite comic actors in all of Houston.

A + C:   Stages has developed a two audience approach of having safer fun long running musicals in one theater while edgier plays run next door. Do you ever feel as if you are running two theater organizations?

KENN McLAUGHLIN:  I don’t see it that way, and I never did. I see myself as a storyteller, and I want the range of stories I tell to be as diverse as the community we tell them to. Sometimes, I want to tell funny stories, and sometimes not. That just feels right to me. I’d love to claim some brilliant strategy in programming, but for me, it’s always instinct. I happen to love the populist stuff as much as I love Will Eno, these are very different theatrical experiences for sure, but I’m thrilled by the challenge to do both well. It never interested me to be the guy who only did one thing — I wanted to figure out how Stages as an organization could be seen as extraordinary creators of all kinds of work. My favorite time of my tenure thus far was last season, when we had sold out houses of “The Marvelous Wonderettes” and Eno’s “Oh, The Humanity” running side-by-side. They were both shows that I was insanely proud of. I think that was the most fully realized that Stages has ever been — doing great work in a range of styles for audiences happy to be with.

A + C:   How do you see Stages in the ever growing ecology of Houston’s theater scene?

KENN McLAUGHLIN:   The answer depends on your perspective.  Artists see it one way, the audience sees it one way, and the other organizations see it another way.   Last season, our professional employment offers for local artists were near the same level as The Alley and TUTS. The popularity of our Pantos and the summer musical series have increased our revenues by 30 percent over three years, so we are the first mid-sized theater to break the two million mark three years in a row. I’d say we are leaders of mid-sized folks in artistic opportunity, program development and resources.

A + C:    Say what? Now there’s “The Winter Wonderettes?” Is white fur involved?

KENN McLAUGHLIN: Yes, there is indeed white fur and silver shiny go-go boots — it is 1968. This one is much like an old Andy Williams Christmas special — or The Lennon Sisters on Lawrence Welk — I grew up on this, and it’s such an Americana holiday thing. At the end of the day, the message is the same — love, love, love — and I don’t think we can ever get enough of that message.

KENN McLAUGHLIN:  Critics either loved or hated this play. I appreciate her magical realism touch.

KENN McLAUGHLIN:  Sarah Ruhl is the most distinctive voice writing today. Her ability/agility in moving from the ordinary to the magical in the space of one line is breathtaking. I love all of her work, and have been waiting for the right moment and access to another of her plays. This one is such a landscape of ideas packaged in such a provocative way. At the end of the day, the play is about marriage — what it takes to make a marriage work. I find the final image of this play to be so joyous, I’m tearing up just thinking about it, the idea that love and sex have been disconnected in our society — or maybe they were never connected in the first place, and we just forced them together — this is a bold exploration. If the play is important, then part of this comes from the courage of a woman writing about the female sexual experience and lifting this to the universal human hunger for intimacy.

KENN McLAUGHLIN:  I saw the show on Broadway without knowing anything about it, which proved a devastatingly emotional experience for me. A musical about a bipolar woman is hardly an easy ride. It is one of the most fascinating pieces of literature I read last year. In fact, I had never seen the play nor heard a note from the score — I just read it and wept. I hadn’t heard a single song when I was on the phone begging the agents to let us do it. This show is remarkable, brave and so wonderful…and yes, devastating at times — just like life — in the end. I find it to be so honest and smart and the perfect close to the season.

A + C:   You are always smiling. You are in the arts, buddy! Things are stressful, didn’t you get the memo? Tell us your secret to staying sane during these hard on the arts times?

KENN McLAUGHLIN:  This makes me really laugh. The staff will be more than happy to tell you about the times when there is no smile at all.  In the darkest days, I ask myself if I’ve done everything I could do, and if the answer is yes, then that’s the end of it.   And I let myself cry when I need to and that clears the air. The arts will never die. Things may change, but new forms will emerge, and my time in all of this is brief so I just do and keep doing and that’s the most any artist can ever ask of themselves. Whether I do it right or I do it enough or I do what people want or whatever — it doesn’t matter to me — I just keep doing what it is I’m compelled to do and if that is making theater — well, how could I not smile?