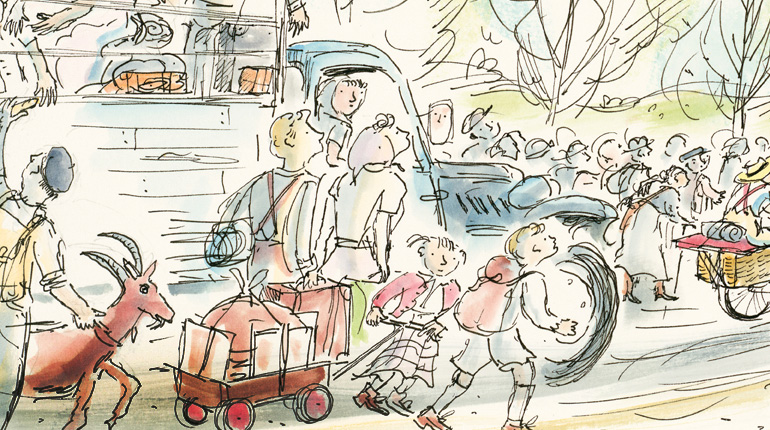 Margret and Hans Rey tried to remain calm as the official came through the train car packed with refugees fleeing Nazi-occupied France and asked for identity papers. When the official saw the stacks of papers inside Hans’s bag, and he became immediately suspicious. After all, the couple spoke with German accents. Could they be spies?

But when Hans Rey pulled out a manuscript for a children’s book entitled “The Adventures of Fifi,” about a mischievous and curious monkey who was always getting into trouble, the official smiled and passed them by. Nearly a year later, after a harrowing wartime escape and journey to the United States, the couple would become known as Margret and H.A. Rey, and the monkey would be renamed Curious George.

A new traveling art exhibit, “The Wartime Escape: Curious George authors Margret and H.A. Rey’s Journey from France,” opens December 15 at Mesquite Arts Center. More than three generations of Americans have grown up reading the stories of an irrepressible little brown monkey known in this country as “Curious George.”

But few people know about the incredible journey made by his creators to escape the Nazi invasion of Paris at the start of World War II. Stashing a few precious belongings and manuscripts in their knapsacks and the baskets of their bicycles, the Jewish couple fled Paris in June 1940, starting a five month odyssey by bike, train, and boat that would eventually bring them to American shores.

Beginning in the years prior to the war, “The Wartime Escape” explores the Rey’s early creative collaborations and traces how the story of George himself (originally titled “The Adventures of Fifi”) spanned the wartime period. The monkey emerged as a character in one of the Rey’s pre-World War II stories, and the manuscript that became “Curious George” was already in progress by 1939. However, wartime constraints on printing as well as the general turmoil of the period prevented the original contract from being fulfilled. When the Reys were forced to flee Paris along with thousands of other refugees in advance of the German occupation, the manuscript and illustrations for the book were among the few personal possessions that they managed to take with them.

Escaping via Spain and Portugal, then across the Atlantic to Brazil, the Reys finally reached the United States in October 1940. A month later, they received a new contract from Houghton Mifflin for “The Adventures of Fifi,” later re-titled “The Adventures of Curious George.” The exhibition features 27 framed art prints by artist Allan Drummond and supplemental archival images from the holdings of the De- Grummond Collection of Children’s Literature at the University of Southern Mississippi. The exhibition is based in part on the 2005 publication, “The Journey that Saved Curious George: The True Wartime Escape of Margret and H.A. Rey,” written by Louise Borden and illustrated by Allan Drummond (Houghton Mifflin Company, New York). The exhibition is organized and curated by Beth Seldin Dotan, Director of the Institute for Holocaust Education in Omaha, Nebraska.