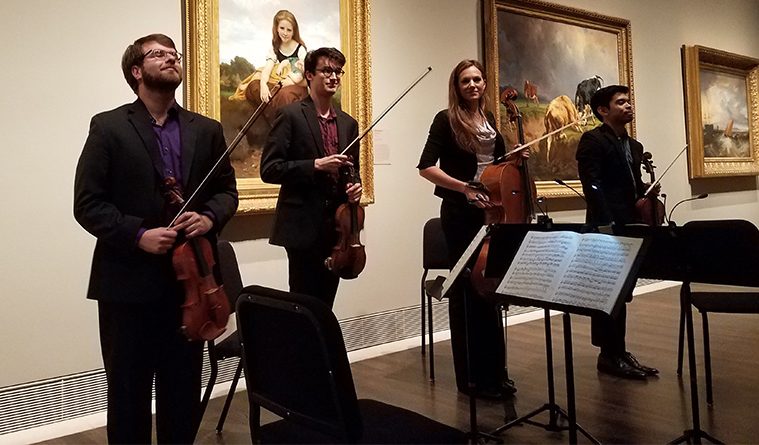 Da Camera’s Beethoven For All: All for Beethoven 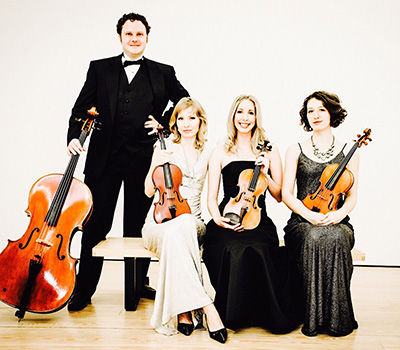 In 1988, for the first time in Houston, the entire cycle of Beethoven string quartets was presented by the renowned Julliard String Quartet to launch Da Camera’s inaugural season, six concerts at the one-year-old Wortham Center Cullen Theater.   30 years later, this monumental cycle is being recreated in free concerts all over the city of Houston to commemorate the organization’s three decades of artistic commitment to the place it calls home. The Beethoven For All project was born.

Programming all 17 of Beethoven’s string quartets in one season (from October to June) is a daunting task for any organization. The hallowed cycle, in its totality, has no equal in the repertoire. Beyond technical brilliance, absolute mastery of style, and expansive emotional scope, the cycle, spanning Beethoven’s entire working life, is also a profound testament to the composer’s personal odyssey. The music’s appeal lies in its sheer humanity.

When Brandon Bell, director of Education and Community Initiatives at Da Camera, took the reins in October last year, Houston’s arts community was still reeling from the devastation caused by Hurricane Harvey. The Beethoven For All project was supposed to have been launched at the Theater District Open House, with performances of two of the quartets by the New York Philharmonic String Quartet. Harvey blew away that plan, but the silver lining was the coming together of many local ensembles to bring this project to fruition. “It was always the plan to involve as many of our local chamber music groups as we can,” says Bell, “and what’s great is that so many of these groups are populated with current or former members of the Da Camera Young Artist Program. Everything is coming full circle.” 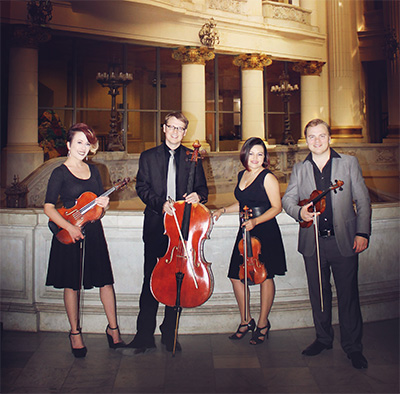 The wide variety of venues is one of the features that makes Beethoven For All remarkable. The very first one, Op. 18 No. 2, was presented by a Da Camera YA string quartet under the Calder mobile at the MFAH (Oct. 21) as part of the museum’s free gallery pop-up concerts. “The chemistry was great between the Young Artists,” recalls Bell, “it was the first time they had worked together and it was a very special concert in a very special space.” Describing the audience for these concerts, Bell observes that because of the broad range of venues, the audiences too are very different. “At the museum for instance, we might see a significant portion of the audience who ordinarily would not go to a chamber music concert, but at other venues we might see people who have been to a lot of these performances and are even checking them off as they go.” Beethoven string quartets BINGO!

How does one connect to these extraordinary works on a personal level? For Ingrid Capparelli Gerling, former YA and violinist of the Axiom Quartet, it was the nostalgia associated with a particular quartet at a particular time in her life. “When I was growing up, Op. 59 No. 1 was my alarm clock for an entire year. I would wake up to the opening theme and I’d just be so happy. It sounds like the sun is coming out and I was just obsessed with it. So it was a dream come true that we chose this quartet to play in November as part of the Beethoven For All project.”

Axiom will be performing one more quartet, Op. 18 No. 5, as part of Da Camera’s A Little Day Music, the longest running free concert series in Houston, at the Houston Public Library’s Julia Ideson Building (Feb. 7). On the same program, current YA Anya Wilkening and her group, the Kamila Quartet, will be tackling perhaps the most formidable work of them all, the Op. 133 Grosse Fuge. Replete with challenges on every front, navigating this work can be bewildering for even the most seasoned ensemble. Wilkening feels fortunate that in this musical journey the quartet has a wonderful guide and mentor in their coach, Rice University Shepherd School violin professor Kenneth Goldsmith. “There is, of course, pressure, perhaps most of all coming from within each of us as individuals, to do justice to such a significant work. At the same time, there’s a sense of great joy that we have this opportunity now, so early on in our careers.”

Whitney Bullock, former Da Camera Young Artist (YA), now violist and education director of Apollo Chamber Players, found a certain serendipity in this project coinciding with Harvey. “What’s unique about Houston is that there are so many vibrant small arts organizations that have taken this under our wings. It’s not only Beethoven for all, but also we are all for Beethoven. We want to give something back to the community. We are all feeling the financial strain from Harvey, the reduced audience sizes, and other challenges, but if we can all play Beethoven for free for people, we can heal their souls in some way.” 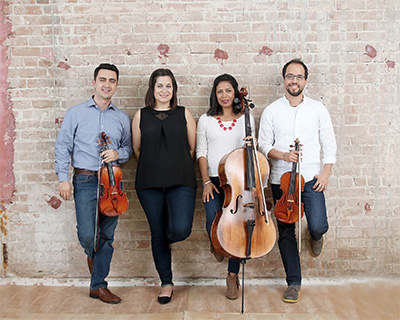 Apollo Chamber Players will be playing Op. 59 No. 2, one of the three quartets commissioned by Count Razumovsky, then Russia’s ambassador to Vienna, at the Russian Cultural Center (Feb. 9). The famous Russian folk tune in the Scherzo, given masterful contrapuntal treatment by Beethoven, is only part of the charm of this dramatic work, fully symphonic in scope. “Apollo played this piece several seasons ago, when Anabel (Ramirez) and I were new to the group,” adds Bullock. “It’ll be interesting to see how much we have grown as an ensemble since then.”

The “For All” part of this project really means for all, even the youngest of audiences. One of the concerts will take place at the Campbell Learning Center (Feb. 10) as part of Da Camera’s Music Encounters educational program. The Calliope String Quartet will use the Op. 18 No. 3 quartet as a teaching tool in a concert designed to engage the entire family. Rainey Weber, current YA and violist of Calliope, thinks this is the perfect quartet for showing the importance of teamwork, and by extension empathy, in playing chamber music. “There are so many wonderful ways that the melody is passed off from one person to another. Also the two-note motif that opens the piece has a nice familiarity to it—it’s the very recognizable opening theme of “Somewhere” from Leonard Bernstein’s West Side Story.”

For former YA Jackson Guillen, violinist of the relatively new-on-the-scene Terra Nostra Ensemble, whose mission is to promote music from Latin America and the Iberian Peninsula, the idea of taking part in such a historic project was truly gratifying. “I’ve never seen this before, bringing together so many groups for the entire cycle. Usually we hear the cycle from one group. You hear one interpretation. In this case you’re going to hear a lot of different perspectives on how to play Beethoven. That is really great!” Terra Nostra will contribute its interpretation of Op. 18 No. 6 at Christ the King Lutheran Church (Feb. 15).

Coincidentally, KINETIC, led by violinist Natalie Lin, will be performing the chamber orchestra version of the Grosse Fuge later on in its subscription season. So Beethoven was already very much on Lin’s mind when KINETIC was invited to participate in this project. “Four of our musicians are Da Camera Young Artists this year. So we already had that collaboration happening. I think this is something unique about Houston that you may not get in other large cities, this openness to collaborating with fellow music organizations. We are all chamber musicians. There is a very social aspect to playing chamber music. It’s really fun. When people come to see us play, they’ll be able to see that it’s all about community.” Members of KINETIC will be performing the fervently expressive Op. 74 “Harp” quartet at one of their favorite venues, the beautiful and intimate Archway Gallery (Feb. 18). 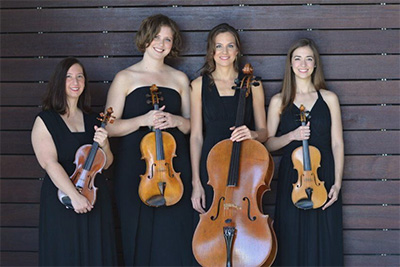 The youngest performers for this project are from the Houston Youth Symphony. As a chamber music coach for HYS, Whitney Bullock is excited to guide a quartet from this group for a performance of Beethoven’s Op. 18 No. 4 (May 13). “It was the first string quartet I did when I was in youth orchestra. I listened to it on repeat! It’s still in my DNA as my top favorite because that was the first time I felt like a real string quartet player.” Bullock is eager to share her love for this music with a new generation of string players.

Even the Houston Symphony is participating in the project. The HSO Community Embedded Musicians (CEM) will be taking on Beethoven’s last string quartet, Op. 135, for A Little Day Music (June 6).

For the musicians involved, playing the Beethoven string quartets is pure joy. Weber, who is doing triple duty as Da Camera YA, member of Calliope, and guest artist with Terra Nostra, will have learned six Beethoven quartets this year. “It feels like Christmas,” she exclaimed enthusiastically. “For Da Camera, it’s a no brainer,” Bell muses. “All this talent here in town, let’s cultivate it and share it!”