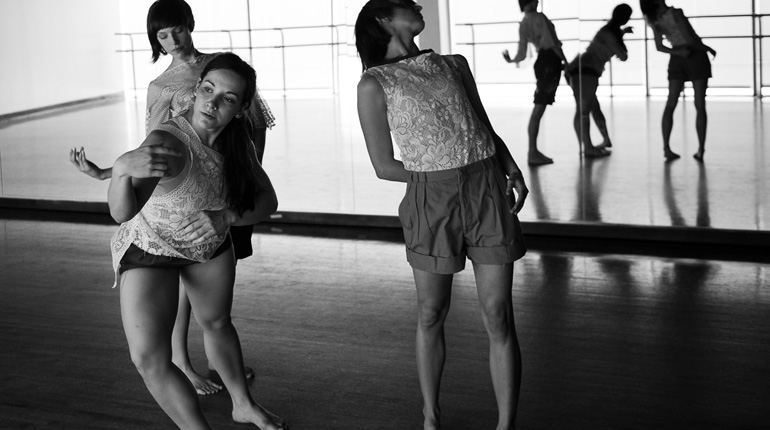 The name Frame Dance Productions has chosen for itself represents more than a shorthand reference to the frame of the body, bringing to mind just as strongly the idea of the frame around a piece of visual art displayed in a gallery or the frame of an incisive argument.  But for an organization that seems so interested in reaching beyond its own medium, collaborating with photographers, visual artists, and composers, both on stage and elsewhere, the name Frame Dance Productions might seem a tad ironic, like that typically colossal goon that everyone goes around calling Tiny. The boundary that a frame represents does not seem to exist for these artists, or — if it does — represents a welcome challenge more than a stern proscription.

Even though the organization is fairly young, turning two years old this month, there’s a good chance you’ve already seen something of their work: perhaps you’ve watched some of their video art available online, or maybe you made it to one of the handful of screenings of last year’s film project Framing Bodies: LOVE ME, or their live collaborative installation at the Contemporary Arts Museum Houston, or perhaps you have just happened to be driving past the corner of Montrose and Westheimer on a recent Friday evening and unknowingly spied through The Photobooth’s entirely glass facade a cadre of dancers and their audience freely sharing the gallery space. Frame Dance has made a habit of showing up in art galleries, at film screenings, and on the internet more often than actually occupying a stage. But for company Director Lydia Hance, this isn’t only a habit — it’s a practice.

“What draws me is placing dance in different settings and looking at it from different perspectives,” Hance enthused as we talked about Frame Dance’s upcoming show CONTEXT, which runs this weekend, May 11-13, in the upstairs gallery of Winter Street Studios. “A lot of my really great friendships have been with visual artists, and while I did not grow up with a visual arts background, I grew up in a family that really stressed the importance of beautiful visual art and painting and museum-going… So the way I approach my choreography and my dance is drawing on the example of how visual art is exhibited in a gallery atmosphere,” she continued. “I want to make [dance] more interactive and a little more social. I want a lot of my events to be in gallery environments where people can walk around and have conversations and not be in a dark theater just looking straight forward.”

CONTEXT combines its various elements — photography, video, music, live performance — into an experience that pervades and persists throughout the event’s duration and throughout the space of the venue, immersing attendees in a dialog between two-dimensional images and three-dimensional bodies, between the camera’s freezing of time and the fleeting memory of movement, inhabiting the world of the audience in a way that triggers intuitive and familiar responses to movement and interaction. “It’s all rooted in the idea of context.” Hance says simply enough, though her plans for the execution of CONTEXT hardly seem so simple. “A word that comes to my mind is ‘layered’ — it’s deep. It’s all the same material, it’s all the same movement, but it’s all these perspectives.”

The company’s work on CONTEXT started with an open competition for original music. “My natural desire is to move with suspension and balance and flow and I wanted to do something to challenge myself,” Hance says, explaining the thought process that led to selecting Charles Halka’s winning composition. “It’s very percussive and it’s fast. It’s very detailed music.” The choreography is likewise “feisty” and calls upon the dancers to manipulate each other’s bodies with parts of their own and plays with the idea of reaching out to connect and being rejected.

Photographers Sil Azevedo and Lorie Garcia were also invited to contribute to the project. Hance gave them a wide berth to work with the dancers, telling them “You can take them wherever you want, you can photograph them however you want — the only things that needs to remain the same are the costumes and the movements.” Through the unconditioned reactions of Azevedo and Garcia, who were given minimal information about the project, she hoped to show not only the ability of the camera to provide new physical points of view from which to experience the choreography, but how the differences between Azevedo’s interest in “contrast and line and tension” and Garcia’s investment in “the emotion, the flesh of the dancers, and the fluidity” also introduce the idea of shifting psychological perspectives as well.

Alongside the photographs, which will be installed in the downstairs gallery of the venue as both prints and projections, Hance is contributing her own video installation on “the in-betweens of everything, all the rehearsals, all the photo shoots, following when a dancer has finished something and they’re waiting for the next shot — what is their body doing, how are they reacting, how are they listening, how are they engaging with each other — picking up those bits of things.” When the attendees have had time to walk through and absorb the visual installations, the dancers will start to slowly appear and “subtly relate” to what’s going on before leading the audience upstairs where seating is set up for the live performance.

While providing context for a work is typically meant to help anchor the audience to a specific interpretation of the show, Frame Dance’s CONTEXT is intended more to inspire confidence in its audience to find their own significance in the event. “Through the discussion and through the choice of having all these other artists have a voice on the piece that I created, I’m hoping to validate people’s experience and people’s own impressions of what they see in art. That’s something that has come up a lot. I’m always trying to ask people who don’t come to art events normally, what did you think of that? Honestly? — ‘Well, I think I got it but I’m not totally sure if I got it.’  My heart is to give them the freedom and the power to know that whatever you received from that is valid and that’s enough and you don’t need to have any confirmation of your experience to have actually gotten something out of it… I want people to be engaged and come back for more.”