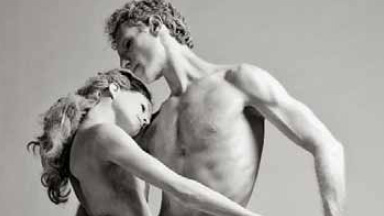 It’s been a big year for dancer/choreographer Dominic Walsh. He turned 40 and his eponymous contemporary company is turning 10.

“It’s funny,” he muses. “I could not imagine we’d come this far or that we would achieve or surpass the outrageous goals we set back then.”

Walsh is sipping a white wine at an Italian eatery as he talks. Italy figures deeply in his life. His partner and lead dancer Domenico Luciano is from Italy and they return there almost every year. This past summer Walsh spent eight days in Naples and Salerno teaching master classes, in Italian.

“I can get through a class, but that’s about the extent of my Italian,” he says with his trademark grin.

Walsh, an Illinois native, came to Texas in 1989 to join Houston Ballet. He danced his way into lead roles right away and by 1996 was a principal scoring classical roles and having new roles created on him by Artistic Director Ben Stevenson, O.B.E. With his classical technique and boyish charm he was a darling of critics and audiences alike.

Two years later he choreographed his first work, “Flames of Eros,” which won a Choo-San Goh Award. He won a second Choo-San Goh Award and a Princess Grace Award in 2008 for his “Trilogy: Wolfgang Amadeus Mozart.”

In 2002 he left Houston Ballet and embarked on a new journey, creating his own company, Dominic Walsh Dance Theater.

But he admits it’s been a tough sell. “We are the first American company to acquire a Matts Ek work,” Walsh says. “That’s enormous, but it’s only huge if you know who Matts Ek is.”

As a boutique dance company, DWDT has been very successful. Walsh compares his model to Hubbard Street Dance Chicago and Cedar Lake Contemporary Ballet. Yet DWDT is smaller than those companies and focuses more on edgier narrative works. It really more closely resembles European boutique companies. The current annual operating budget is $500,000 but with the difficult economic climate Walsh and his Executive Director Leigh McBurnett (the only two staff members) have had to come up with creative fundraising ideas.

DWDT held its first summer session this year, routinely partner with other small arts organizations on collaborative performances and even sold some of the paintings created by his dances in his “Time out of line,” a collaborative dance with Sarasota Ballet of Florida.

“I designed spots of paint on sheets of paper and then choreographed the movements of the dancers to create paintings,” Walsh says. “We were able to sell some of the paintings, we made for $10,000.”

Besides creative fundraising and collaborative efforts, DWDT is experimenting with another new model this season. Walsh is no longer using a full company of dancers.

“Domenico and Stefania Figliossi (another Italian dancer) will do the whole season but the rest of the dancers, like the incredible Hana Sakai, are just guesting,” Walsh explains. Besides being a cost saver, Walsh says this model allows him to work with some of the dancers he’s worked with from around the world. “I wanted to try this for our 10th anniversary season, to bring in all these incredible dancers,” Walsh says. “I work in a very collaborative way. I think it might be a better model to try, so we’ll see what happens. We’ll see.”

Walsh insists his first priority is to deliver a world-class product, no matter what the economy throws at him. And what about turning 40, will he continue to dance?

“I won’t be doing anymore Russians in ‘The Nutcracker,’” he laughs. “I’ll just keep slowly doing less and less strenuous things.” He pauses thoughtfully before adding: “I think we have a strange idea of the craft in this country. “It’s weird how we have to have this big fan fare exit and then never dance again. They don’t do that in Europe. I think we have a lot of dancers in this country who don’t really know if they want to dance. For me there’s nothing better than being in the studio with dancers who are really vested in the craft. That’s where my energy comes from. If you’re thinking of retiring at 25, that’s not really a lifestyle.”

And for Walsh, dance is definitely a lifestyle. Ten years from now, on the company’s 20th anniversary, he hopes to have more support for dance theater in Houston, more dancers and performances for his company and more touring dates where he and DWDT can be art ambassadors for Houston and America. “And,” he adds, “if the role is appropriate, I’ll still be dancing.”