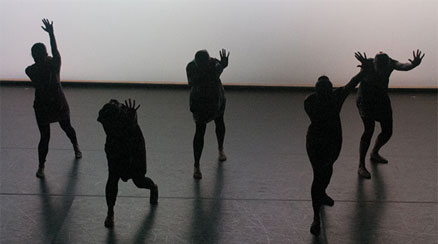 Hands reach into the air, imitating the motions of field laborers in daily fruit gathering work. The movement then morphs into joyous exuberance as they are liberated from the toils of unfair working conditions. This rousing ballet is Si Se Puede, an homage to Cesar Chavez and the Latino American experience. It’s one of the dances that will be performed by Sandra Organ Solis’ Earthen Vessels on February 23 at the Hobby Center’s Zilkha Hall.

The social reformation of a civil rights leader is pretty heavyweight stuff to convey through dance, but anything’s possible with the aid of Solis’ intelligent choreography.  “Elementally Earthen” will feature a program of choreography loosely inspired by the cardinal elements.

The idea to construct a concert based on these classical concepts was a natural progression for the company. “I started with wanting to create work to the music of Ella Fitzgerald, and reminding myself of the Duke Ellington that I previously developed,” she explains. “Then, in trying to come up with a catchy title, Elemental also gave me license to reprise some works about water, fire, wind and spirit.” Some of the works on the program include Fire, by Trey McIntrye, and Stream, a dance Solis choreographed with UH AURA, a contemporary chamber music ensemble.

“Elementally Earthen” also marks a shift in programming, as the company’s annual Black History Month concert has now been restructured as the Heritage Series in order to pay tribute to a broader cultural history. Hence the inclusion of Si Se Puede.

The inaugural Heritage Series concert is going to be a full one, but that shouldn’t be a surprise considering the source. If there’s one thing a former Houston Ballet soloist can do, it’s put on a show. One of the big surprises of the program is a return to the stage of a beloved Houston ballerina. “After fifteen years of badgering, I cornered Lauren Anderson into coming out of retirement to do a bit of dancing,” Solis jokes.

Of course an education is only as good as it is relevant, and what’s more relevant than the popular culture that constructs so much of our lives? For that, keep your ears open for a little Earth, Wind, and Fire.

The program will also feature newly commissioned work by Steve Rooks, a former principle dancer of the Martha Graham Dance Company. Rooks took the call to choreograph to the concept of the elements quite literally. Rather than utilizing the mystic elements of earth, wind, fire, and water, he went a more scientific route by taking his cue from the periodic table. The result is a dance in three movements inspired by promethium, helium, and zinc. It’s a robust work that is almost tribal in its essence, filled with power stances and sharp movements. Watching the Earthen Vessels dancers in rehearsal, one can’t help but marvel at the versatility of their repertoire.

For example, juxtapose the warrior micro-movements of Brooks’ piece with the girlish confection that is ELLA! Previously seen at the Evelyn Rubenstein Jewish Community Center’s Dance Month in January, this re-worked set has four dancers turning and leaping in sumptuous costumes that look like they were swiped off the set of Mad Men. Fitzgerald’s rich vocals are accompanied by some pretty technical ballet work, which is often missing from the majority of Houston’s contemporary dance companies.

Some of the dancers in “Elementally Earthen” are Earthen Vessels veterans while others are newer additions to the company. They get a chance to share the stage as an ensemble in the show’s finale, a sweeping piece choreographed to “Child of the Wind” by Bruce Cockburn. The dancers triplet across the stage in carefree waves, like dandelions in the wind. The piece ends in a swirling spiral, the dancers moving around one another with their hands interlaced. Despite the flower child lyrics, the finale feels windy, and definitely elemental.

The dances of Earthen Vessels serve a dual purpose. They are engaging to watch, but they also fulfill the company’s mission to educating its audience. “Elementally Earthen” offers a crash course in science, history, art, and American pop culture in the form of entertaining contemporary dance.

For Solis, that’s what it’s all about. “Some of those who have experienced our concerts tasted a little beauty, or learned something they never knew, or came to appreciate their fellow American in a new way,” she says. “Numerous school children have seen things danced that they had yet to study, or seen something of this ballet world that they would never have been exposed to had we not been there. We’re educating a whole new generation of dance goers.” Whether it’s becoming familiar with the elements of the periodic table or becoming acquainted with the iconic music of Ella Fitzgerald and Duke Ellington, there’s plenty to take home from “Elementally Earthen.” Learning was never this much fun.