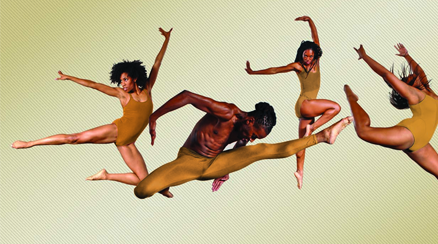 A line of Congolese villagers dance for healing as their spines undulate while they pass magic from palm to palm. Three figures in trench coats stand underneath an umbrella, waiting for rain, or a bus, or a cue to move. A mass of black limbs in a sheeted tent lift a lily white body above their heads. These images, as disparate as they are, are unified in their portrayal of the African American experience, at least in Urban Souls’ re-imagining of it.
On February 23, Urban Souls presented their Black History Month concert “ReWritten in Stone,” a celebration of the 150th anniversary of the Emancipation Proclamation, but also a call to action to break free from the metaphorical chains of 2013. Those chains include harmful realities of love, confusion of sexual orientation, and bad behavior perpetuated by the media. How to emancipate oneself from such vileness? Dance, of course.

In an attempt to convey the entirety of the African American history, “ReWritten in Stone” fittingly begins at the origin of diaspora history in the United States: Africa. Houston-based guest company KoumanKele African Dance & Drum Ensemble performed Zubula/Nzobi, a Congolese trance rhythm traditionally used to heal the sick. Artistic Director Christina Gerard has an eye for the authentic, which is evident from her gorgeous costume designs and use of intricate make-up.

High productions values aside, the ensemble was fleshed out with new company members and all were moving in beautiful rhythm. The dancers entered from the wings like spirits seeking bodies to possess. Their bodies reached upward, in petition of the orissas, or deities. I’ve never seen KoumanKele in finer form.

The Emancipation Proclamation is a piece of political history, so any rewriting of it will inherently carry a political undertone. The first real sense of this current is felt in Walter Hull’s I Am a Thrival. Based on the work of Dr. Nat Irvin II, a professor of management at the University of Louisville’s College of Business, Thrival examines the young generation of African Americans who are unencumbered by traditional ethnic roles. The brief introductory film suggested a heavy-handed message, but that worry dissipated once the dancing started. The choreography was filled with broad strokes of the arms, open-chested attitude turns, and well-executed leaps. The movement is one of discovery, of young adults joyful to be alive and inhabiting a world not previously their own. They are “thrivals,” and by the end of the triumphant dance, I wanted to be one, too.

Urban Souls has always been an inclusive company, particularly in its support of younger generations of dancers. If audience enthusiasm is a measure of success, then the girls of Urban Kids win the gold by a large margin. Urban Kids, the company’s new outreach program, made its debut with Sisters in the Spirit. The piece featured the youth company’s five most technically advanced students, leaping and turning in pale sea foam evening dresses. It’s going to be exciting to get to know the Urban Kids and see where their dancing takes them.

Hope Stone Dance Company was also in the house with Jane Weiner’s Called Back. It is not clear exactly who is being called back and from what, but when choreography is this intriguing the absence of narrative is hardly felt. A dozen or so high-heeled pairs of shoes line the right side of the stage while dancers are boxed in with masking tape. The motif is a finger waving/pointing gesture, suggesting a trajectory of some sort. The trio of Courtney D. Jones, Alonso Lee Moore IV, and Candace Rattliff move, and in a variety of ways – in jazzy synchronization, gentle partnering, and emotive high releases that send their energy to the sky. The shoes are eventually placed in a row upstage, and each of the dancers take their position in a taped circle, an umbrella held overhead. The dance returns to where it began, but a journey that required many soles has clearly taken place.

The concert’s finale is an extended piece of dance theater. Harrison Guy’s ReWritten in Stone has enough ideas in it to potentially develop into its own concert, but what is here is more than substantial. It is here that the words of the Emancipation Proclamation are fully realized. The spoken word artists Jem, Lyro, and Seek provided clever poetry that addressed plagues of the contemporary African American experience. Their words proved more than musical, as the dancers moved with just as much heart and grit as they did to scored accompaniment.

There is also plenty of glorious ensemble work in ReWritten. The rousing gospel movement is punctuated by moments of stillness with longing gazes and anxious points to the horizon, the nearing future of freedom. That freedom, according to the poets, is still in the making, as there is much to be freed from in contemporary culture: religious bigotry, mass media, self-destructive impulses, depression, and poisonous love. ReWritten asks us to not forget this continuous struggle.

It’s a plea that every audience member can take to heart. There is always some cage to be freed from, some impediment to a better self. Emancipation is always in order.