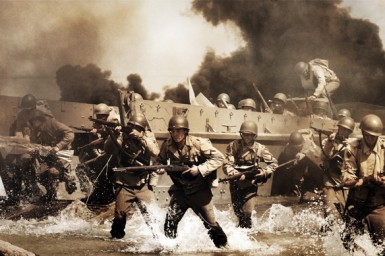 Promo poster for My Way

Je-kyu Kang’s ‘My Way’ is not just a film you watch; it’s a full emotional experience.  ‘My Way’ will take you on a moving journey through several countries and languages as you watch the intersecting lives of two young boys, one Korean and one Japanese.  This is Korea’s most expensive film to date (approximately 28 million dollars in production costs), which is readily apparent given the epic scale of the film and the Hollywood-style action sequences.   This is one of the better films I have seen in recent memory and most definitely the best film dealing with war-time since Spielberg’s ‘Saving Private Ryan’.

‘My Way’ begins in Korea during the Japanese occupation of the late 1920’s.  Kim Joon Sik (Jang Dong-gun) is a young Korean boy who lives with his family in the servant quarters of a Japanese officer’s acquisitioned estate.  When the officer’s grandson, Tatsuo Hasegawa (Joe Odagiri) moves to the estate, the two boys quickly become friends and develop a friendly rivalry, racing each other on foot.

As teenagers, the boys both become equally accomplished marathon runners.  After Hasegawa wins an important race in high school, his grandfather throws him a party.  At the party, Joon Sik’s father is handed a gift to deliver to Hasegawa’s grandfather.  When the grandfather opens the gift, a bomb is revealed. The grandfather dies, throwing himself over the bomb to save the others at the party.  Confused by anger and grief, Hasegawa blames the Korean people and Joon Sik’s family for the tragedy. Joon Sik and his father are both exiled from the estate.  Hasegawa threatens to kill Joon Sik the next time he sees him.

Despite their hatred for one another and their divergent social standings, neither of them can free themselves from the other.  Their paths are destined to intersect over and over, across country, across time, and in the most implausible ways.  By a strange turn of events, the two men end up racing each other in an Olympic qualifying race. The outcome of the qualifier and allegations of cheating lead to a race-riot between the Japanese and Korean spectators.  As punishment, Joon Sik and his fellow Koreans are sentenced to fight for the Japanese Imperial Army against the Russians. Years later, after Joon Sik has sustained abused and torture by the Japanese soldiers and officers, a now cruel and ferocious Hasegawa is placed in command of Joon Sik’s battalion.

Promo still of My Way

After refusing to participate in a suicide mission that Hasegawa plans only for the Korean soldiers, Joon Sik is sentenced to death. But before the execution can take place, the Russians invade and Joon Sik and Hasegawa are taken as Russian prisoners of war. As POWs who share the same history and plight, they find mutual respect for one another and work together to escape the Russian POW camp. In their attempt to escape, however, they are captured and made to fight for the invading German army.  Although separated for years as they fight for the German army, they are reunited just days before the Normandy Beach Invasion. Just as the Allied troops begin their attack on Normandy, the two men begin their escape.

‘My Way’ spans several countries, several languages, epic battle scenes, and has some of the best special effects I have seen.   The war scenes were mesmerizing and incredible.  Although I have never fought in a war, I felt that this movie gave me a glimpse at its true face—a face of desperation and horror.  I have not seen war scenes this impressive since ‘Saving Private Ryan’.  There is also an amazing scene midway through the movie where a fighter plane is shooting at Joon Sik as he runs for cover.  The scene was borrowed almost directly from Hitchcock’s 1959 ‘North by Northwest’, but with today’s special effects, I found myself wanting to duck out of the way as the plane headed straight for me.

The film rarely lets you breathe, but when it does, it is much needed.  Although this is a brutal epic war film, the connection and development of the two main characters is the real story.  Each segment of this film shows the struggles of the characters to survive the tumultuous and ever-changing political, social, and military landscapes.  As the world violently and unpredictably twists around these two characters, they are each other’s lodestar.  One’s humanity depends on the other’s survival.  Hasegawa evolves from an evil and brutal man of war into a man who internalizes the value of life and the equality of all men.  Conversely, Joon Sik always looks out for his fellow man and somehow maintains his determination and conviction despite the obstacles he endures. Watching these foils form a friendship over the course of cold-blooded murder and war was truly an unforgettable experience.  The two main actors, Joe Odagiri and Jang Dong-gun did an utterly flawless job with their roles.

Although I wouldn’t change much about this film, I did find that Je-kyu Kang’s favorable portrayal of Koreans and scathing portrayal Japanese may have oversimplified the social relationships in favor of the director’s patriotic rhetoric.  My only other objection is that Je-kyu Kang briefly inserted an unnecessary and distracting female sniper character into the film. Thankfully, no romance muddied this film.

Other reviewers have criticized this film for the implausible ways that the two main characters keep running into each other throughout the movie. One reviewer even called the story-line “forced.”  Yes, the likelihood that these men’s’ lives would cross is unlikely, but this unlikelihood was not enough to suspend my disbelief.  Je-kyu Kang plays his characters as he would a game of chess. He sets up formations and strategies that force the two king pieces (his two main characters) to come face to face.  As the rest of the board falls away and the two are left standing, one’s move perpetually defines the other’s response and so on.  I wish I could buy a ticket for the world to see this film.  It is a milestone in filmmaking and is monumental on every level.

I interviewed Je-kyu Kang, the director of the film and the video of the interview should be up shortly.