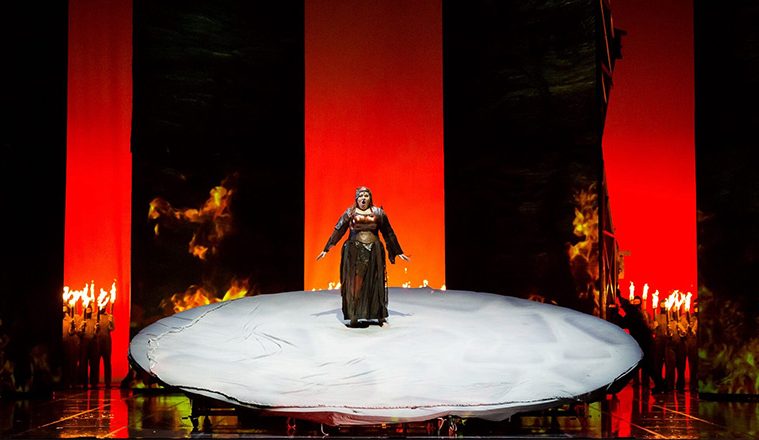 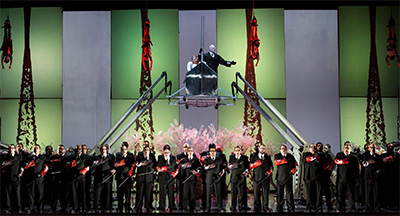 Houston Grand Opera has done it!  The realization of Richard Wagner’s epic Ring Cycle, the single most challenging and monumental artistic undertaking in the opera company’s history, culminated with full force in the cathartic fourth and final installment Götterdämmerung  (Twilight of the Gods).

What the HGO has achieved with this visionary production is nothing short of the embodiment of Wagner’s ideal of Gesamtkunstwerk (total work of art)–a superb cast of singers who are also compelling actors, the conceptually edgy production design by the avant-garde theatrical troupe La Fura dels Baus, ingenious cinematic projections, statement-making costumes and makeup, and underneath it all the supremely dramatic fabric of Wagner’s music.

There was no weak link in the cast of singers. How lucky we are to have Christine Goerke return as Brünnhilde, a role she first tested in 2015 to great acclaim with Canadian Opera Company and HGO’s Die Walküre, journeyed through last season in Siegfried, and now cresting the mountain top as the Brünnhilde of our collective imagination in Götterdämmerung.

Goerke imbued Wagner’s greatest heroine, the one who is destined to redeem the world through her love and sacrifice, with the sum and extremes of all our human emotions. We perceive her adoring love for Siegfried as she sends him on his heroic quests in the Prologue, her voice warm and tender. We see that tenderness turn into a wild, possessive passion when she refuses to yield the ring, now a symbol of love, to her Valkyrie sister Waltraute, sung by HGO Studio alumna Jamie Barton–two strong women, two strong dramatic singers, matching each other in anguish and intensity in a memorable scene. 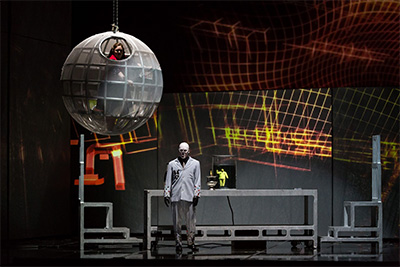 We suffer her fear and humiliation in the next scene, when Siegfried, appearing with the aid of the Tarnhelm as Gunther, slaps her to the ground and tears the ring from her hand. Goerke’s voice in that moment, down to a pained whisper, was as penetrating and moving as in the grandest passages, a marvel of control and awareness.  In Act II, we stand witness, along with the mighty chorus of Gibichung vassals, to Brünnhilde’s arrival as Gunther’s bride. Her utter confusion and bewilderment at her situation turns into shock and disbelief at the sight of Siegfried. His betrayal brings out the fierce goddess in her, bent on ultimate revenge at all cost.  Goerke’s fury, as she calls on Wotan to witness her vengeance, is a full on and awesome display.

Yet Wagner fans look to the final “immolation scene” as the true test of a worthy Brünnhilde.  After more than three hours of singing with few breaks, and an incomprehensible emotional roller-coaster ride, Brünnhilde must endure the death of her lover, come to a full understanding of the will of god and her own destiny, and sing it all in the most noble and transcendent climax of the ages, strewn with high C’s over the resounding orchestral music, while jumping into the flames on her horse Grane (Grane the crane) to redeem the world. Goerke’s energy never wavered, every note held true, shaped and molded, and packed with emotional intensity.  The entire audience was rapt as she soared above the music, carrying us fearlessly into a new world.

Goerke’s Brünnhilde was not the only vortex within which the other characters spun in synchronicity.  Every heroine requires an anti-hero, and in this, Andrea Silvestrelli delivered the Hagen we needed.  His sonorous bass comes with an unmistakable burr that gives it particular resonance and character.  Hagen’s watch scene (Hier sitz’ ich zur Wacht) was done to perfection, the deliberate pace, nuance and pathos, the import given to every note and phrase, served to reveal the inner psyche of a dark and complex character with his own inescapable destiny. We are drawn to his darkness, though it chills us to the bone.  Another emotionally salient scene is the dream sequence when his father, Alberich, appears to him. Sitting still as a corpse, facing his inner darkness, Silvestrelli’s voice acquired a ghostly quality, purposefully blank and emotionless, as if he had no choice but to obey and play his part in the inevitable. I could not bring myself to hate him, though his greed and lust for power doom the world, he too is all too human. 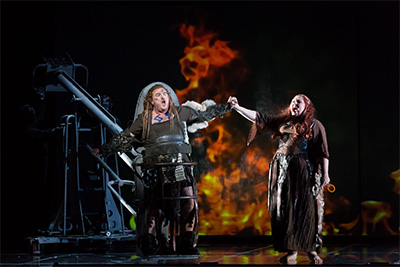 Speaking of greed and power, the prevailing visual imagery of the production is money—numbers, numbers everywhere. The Hall of the Gibichungs flashed with numbers; Gunther, Hagen, and Gutrune all wore clothing reminiscent of stock market brokers. Their vassals appeared in robes with added sleeves of numbers and money signs in many languages, Chinese yuan, Japanese yen, the Euro—we are all guilty and complicit in the corruption and destruction of our world.  Even Siegfried, our hero, is easily fooled and undergoes a startling transformation from the naturalistic warrior hero to just another man in a suit. The Rhine is polluted with plastic bottles, industrial imagery whirled in the background, humans are literally sacrificed like animals on a rack, the gods’ names are smeared in blood and erased from our memories. Only fire and water, unleashed by Brünnhilde’s sacrifice, can cleanse the world and make it anew.

There are still a few unexpected surprises in the staging, though we are already used to the enchantment of the projections, the playful Rhinemaidens in water tanks, the mechanical cranes bringing gods, Loge on a Segway, from previous installments. Simon O’Neill, as Siegfried, defied gravity when he sang with clarion clarity while hanging upside down from the silvery boat that brought Gunther and his bride home.  A shocking “orgy” scene at the end of Act I symbolically represents the defilement of Siegfried and Brünnhilde’s marriage bed and the corruption of the pure. And I hesitate to reveal what was done in one of the most heart-wrenching moments of the entire drama, Siegfried’s funeral procession.  Let’s just say the 4th wall was broken in the most solemn and powerful way.

At last we come to Wagner’s music, the life-giving force of all the drama on stage. Under the masterful direction of Maestro Patrick Summers, the HGO orchestra played with nuance and intensity, and an inexorable momentum that never lagged or wavered, shaping music and drama into a cohesive whole.  Some of the most moving moments of Götterdämmerung occurred when the screens were dark and the curtains were down, when we focused on Wagner’s glorious web of sound, the interplay of leitmotifs that become familiar and rouse strong emotional responses–the heroic call of the multitude of brasses, fortified by 4 Wagner tuben, the shimmering strings permeating all the great themes from love to death, and the woodwinds creating myth and magic. When the Redemption Through Love motif is heard one last time, at the very end of this epic journey, tears well up and no words are left. 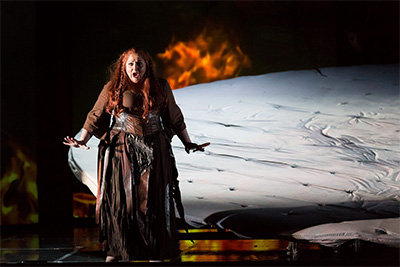 For the HGO, the completion of the Ring Cycle is a dream realized. It was no doubt a transformative experience for all involved–cast of singers, orchestra musicians, chorus, countless supernumeraries, the creative team, the crew and tech people behind the scenes, donors, supporters, and the audience.  On this opening night, the applause and ovations were wild and long, filled with deep appreciation for the absolute commitment of each person who made this once-in-a-lifetime experience possible.  Houston, we have mission accomplished. Bravi Tutti!