Thick black smoke clouds engulf the large canvas mural that dominates the entrance of artist Anna Mayer’s solo exhibition, Forms of Inheritance, on view through May 8 at the Houston Center for Contemporary Craft (HCCC).

On a global scale, our environment is our inheritance. Mayer takes her interest in the impact of environmental disasters, such as this one of the 2009 Cataño oil refinery fire in Puerto Rico, and through a material process, draws it down to a human, and intimate scale. Mayer has been crushing porcelain dinnerware she inherited from her parents inside this and other rolled-up canvases. The process of breaking down the porcelain changes the surface of the canvas. The shards fleck the fabric. The canvas itself becomes degraded, adding to the toxic atmosphere of the image. The crushed porcelain is then repurposed by the artist in another body of work, one that reflects her long-standing interest in the history of mourning ware.

“A lot of the pieces in the show have a very tangible connection in how one piece is used to inform another piece. That’s really indicative of the tangled web that we ourselves live in with the things we inherit,” says Kathryn Hall, curator at HCCC. Below the looming mural of fire, an oblong platform, low to the ground, serves as a kind of memorial altar. It’s an evolving installation the artist calls “Seeping and Squandering.” On it Mayer has assembled a collection of objects and staged them as an offertory: ceramic sifters for sorting crushed inherited dinnerware, a flecked canvas print of Frederic Remington’s Bronco Buster bronze, a stack of mourning fabric, discarded funeral fringe, a photo of the Davis-Schrimpf Seep Field in Niland, CA with a geothermal plant in the background, a mourning ware vessel with seep lip, using found clay from the seep field, “ghostware” made by pressing clay into pieces of inherited dinnerware. Here one can see a range of the materials Mayer has used in her work, and images and objects related to her varied interests in geology, the environment, the history of ceramics, Old West nostalgia, and Victorian mourning garb. “This installation really pulls together and unifies her entire corpus of work that is on view,” explains Hall.

More than a decade ago, Mayer placed 12 torso-sized ceramic slabs around the canyons of Malibu, CA for her project Fireful of Fear, with the premise that eventually they would be fired naturally by wildfires. Six were fired in the Woolsey Fire in 2018, and Mayer was able to retrieve four of them. Two were carried away in mudslides. Three are on display in this exhibit. Although her extensive research on wildfire patterns informed her placement of the slabs, she had not intended the project to be about the effects of global warming.

“Honestly I had no idea that global warming would mean what it has meant for wildfires in the last several years. The fires now are hotter, faster, more frequent, and more severe.” Mayer recalls the landscape she saw on her retrieval trip: “We looked down an incline and there was one of my pieces. All around it there was nothing left. It all burned.”

When she made the work she was thinking about land use, of multi-million dollar houses being built in a place where wildfires were inevitable, of the human desire to possess and tame the land. “It’s a complicated thing,” says Mayer, “I was totally prepared for them to never fire in my lifetime, and a part of me didn’t want them to.” 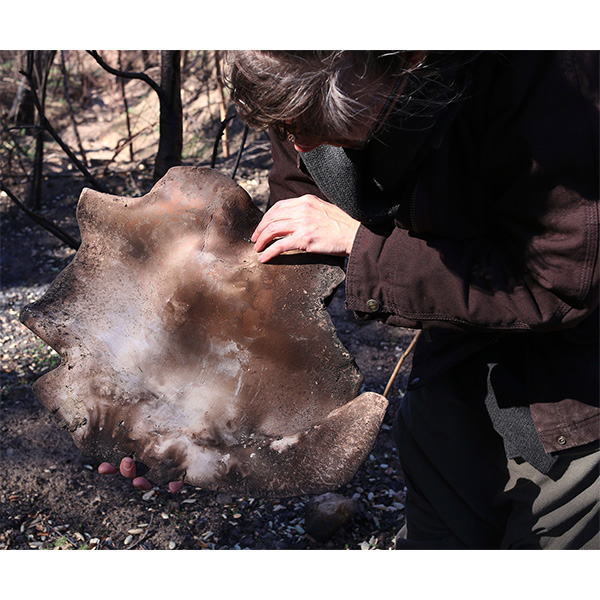 Anna Mayer, “Fireful of Fear,” 2008 – present. Process image from the retrieval of a wildfired ceramic sculpture from the charred landscape in Malibu, CA, 2018. Photo by Poppy Coles. 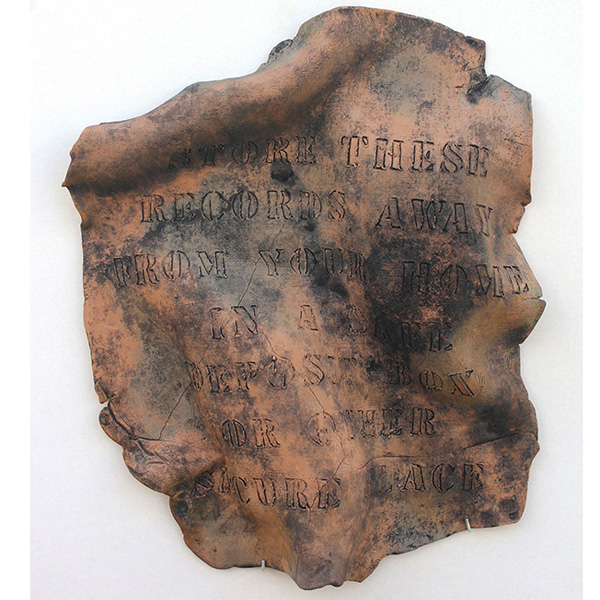 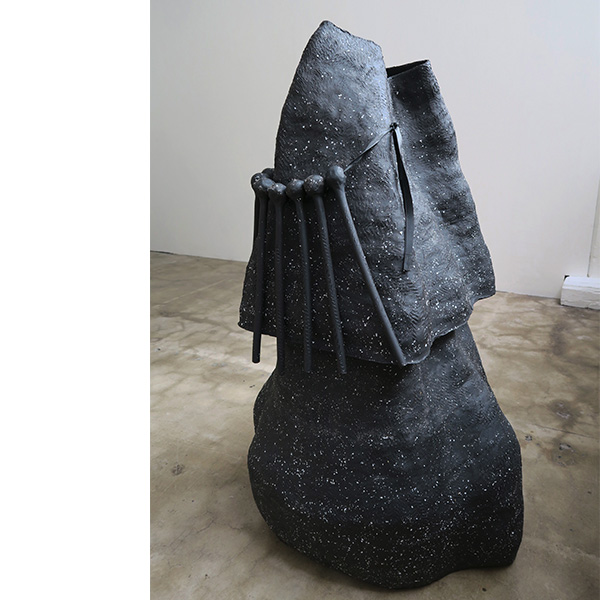 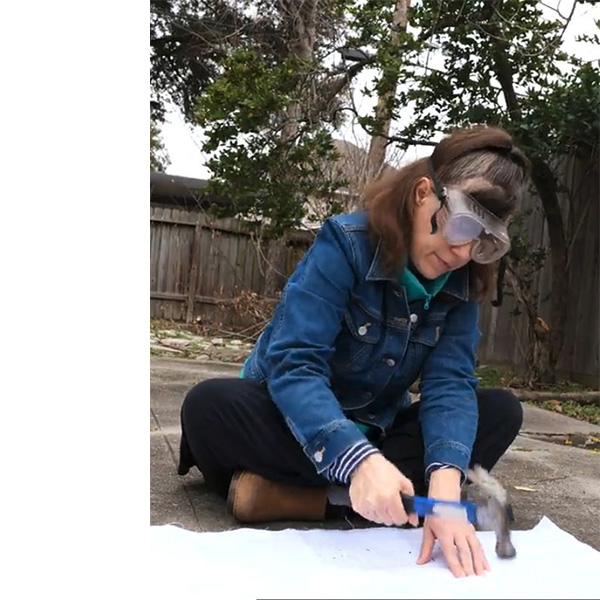 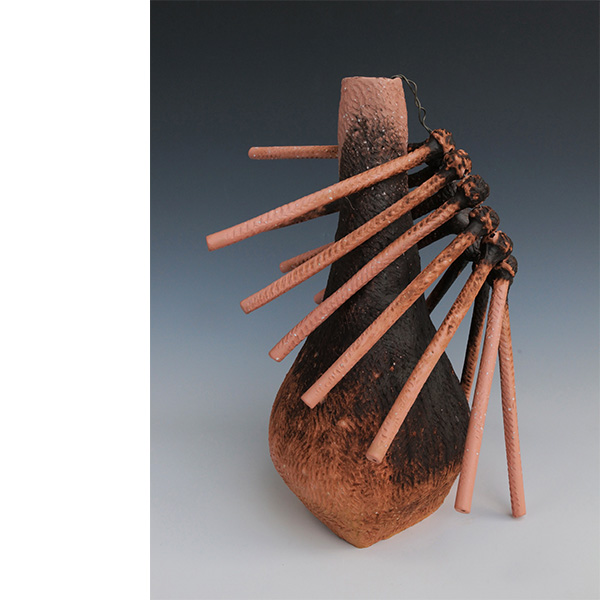 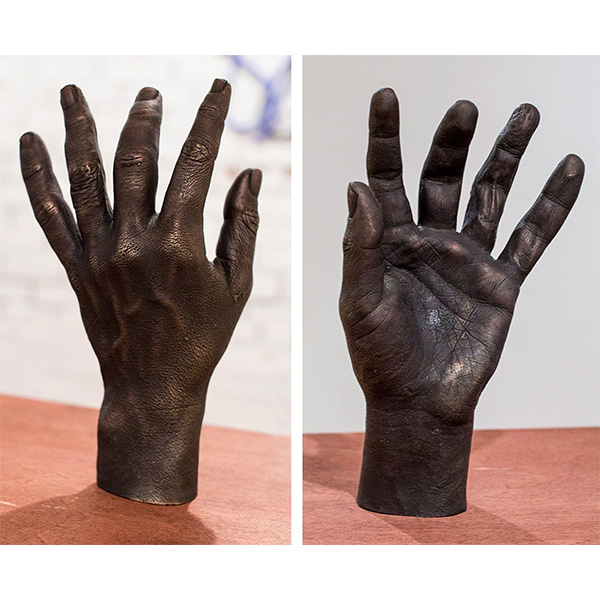 Anna Mayer, “We Are Not Only Anything (Left Hand),” 2013-2014. Bronze. Edition of three. Each hand is 9 x 5 x 3 inches. Photo by the artist. For this work, the artist cast fingers from 10 different people, including herself, and used them to create composite hands from bronze. 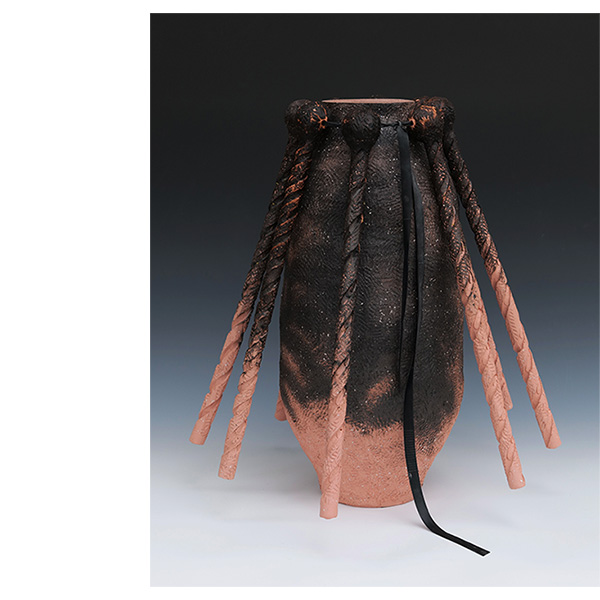 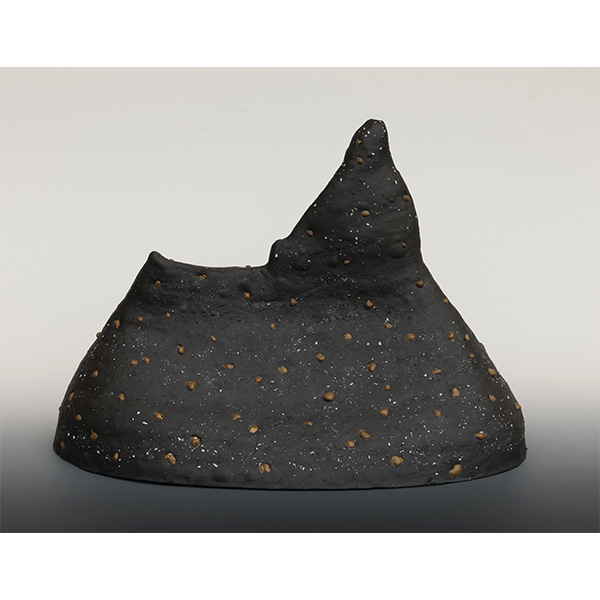 As in many of her works, there are multiple contexts to consider. The slabs are inscribed with text and appear crumpled. Mayer is making a reference to the ceramic tablets used in ancient Assyria to record inventory of goods. Add a little water and the text could be erased and the tablet reused indefinitely. The pillaging fires of wars that destroyed villages and lives also preserved some of these artifacts for posterity.

Postcards the artist sent to friends and family on each anniversary of the project and her super-saturated watercolors of the tablets serve as a personal documentary, marking time and reflecting on the idea of memory and mourning. Within the first decade of the ongoing project, both Mayer’s parents passed away. The eventual realization of ecological catastrophe became the background for the mourning of the artist’s deeply personal loss.

“I really started thinking about the idea of inheritance when I began making the mourning ware pieces,” says Mayer. “When my parents passed away I inherited their porcelain dinnerware. I’ve been crushing them down. I was thinking about Victorian protocols for mourning and the way women would dress all in black. Then depending on the time, they incorporated patterns, little flowers, and decorations that would literally lighten the black.”

To translate the concept onto a ceramic surface, Mayer built the forms and then pressed the crushed porcelain into its surface, embedding remnants of her family’s life together in the pieces. The protruding flecks of bright white contrast beautifully with the rich metallic black of the body, giving it articulation and vitality. 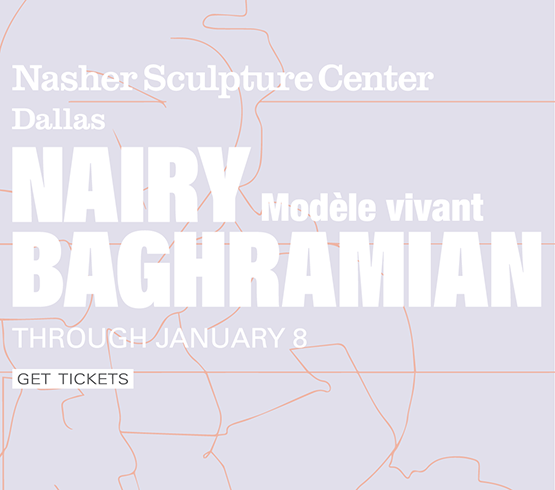 The fringe element in the foreground opens up the body-forms to spontaneous transformation. “Ceramic is so unmalleable once it’s been fired, this is a way of being able to shift it,” explains Mayer.

The forms alternately evoke bodily contours and natural land formations. In Mount, “gleaned clay” found near belching mudpots in the desert of Southern California dot a mountainous form. In Layers, red clay from a Houston construction site mingle with greenish-brown clay from a receding (due to drought) salt water lake. The coloring of the mourning ware ranges from obsidian black to a beautiful mix of peach and pink merging with a smoky black. The latter results from an ancient firing technique Mayer has adopted for some of her works. Originating from the Baltic region around the 12th century, Obvara firing involves pulling a piece out at a high temperature and dunking it directly into a slurry of yeast, flour, sugar, and water, “cooking” the work on the surface. Mayer likes the chance factors inherent in the process.

Since moving from Los Angeles to Houston in 2017 to assume her position as Assistant Professor of Sculpture at the University of Houston, Mayer has turned her long-standing interest in critiquing Old West nostalgia toward the actualization of a new project. She has been collecting reproductions of Frederic Remington bronzes, melting them down, and casting them into ingots of her own design. Her goal is to eventually pass them on to other artists who can use them in their own work, particularly Native American artists.

Remington’s popular figure of the heroic cowboy on horseback is ubiquitous in the American cultural lexicon. His Bronco Buster, gifted to the White House Collection in 1976, has been prominently displayed in the Oval Office by every President since Jimmy Carter. Millions of replicas sit on office desks. It is an enduring symbol of Western grit, and a signifier of distinctively “American” values. Yet the frontier myth and the rhetoric of Westward Expansion and Manifest Destiny perpetuated by such a symbol ignore the stories of those who were pushed out and the violence enacted against them.

Mayer’s project seeks to repurpose and recontextualize the material, reframing our inherited ideals to tell a different story. Incidentally, President Biden removed the Bronco Buster from the Oval Office on his very first day in Office, replacing it with a horse and rider sculpture by the late Allan Houser, a renowned artist of the Chiricahua Apache tribe.

The through-lines in Forms of Inheritance take viewers on a journey both personal and universal. Metaphors abound. Underlying ideas seep through the consciousness like the raw clay bubbling to the surface of the earth, to be found and remade by the artist. Mayer’s artistic practice reflects on the language of mourning, bears witness to the fierceness, fragility, and transformative power of the natural world, and places in context the dimension of human experience within the immense span of geological time—what we inherit and what we leave behind.

Mayer offers one more lasting thought in We Are Not Only Anything and We Are Not Only Everything, a pair of life-sized bronze hands and feet. They read as graceful classical sculptures and easily fit in the “artist’s own hands and feet” trope. But take a closer look—the hands and feet are those of the artist, but each finger and toe is cast from a different individual. They belong to the hands and feet of people in the artist’s communities in Los Angeles and Houston. Mayer’s art is ultimately social, reminding viewers that our collective consciousness carries weight. We are connected.