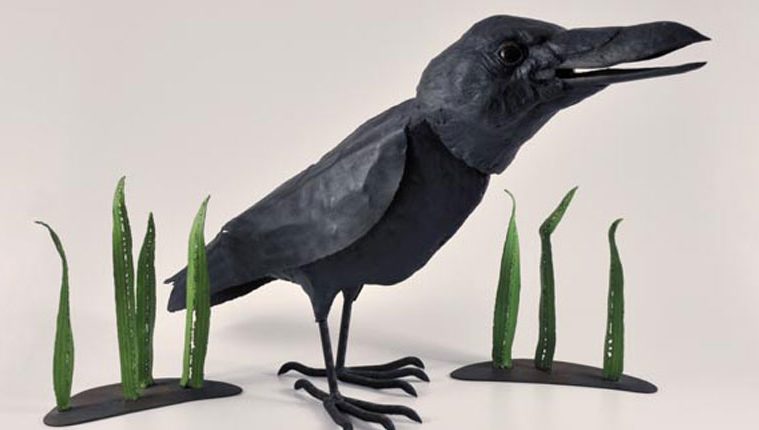 Kathy Boortz developed her affection for the natural world early in life, spending carefree summers on her parents’ dude ranch in Kerrville, Texas. During the school year she was an introverted shy child in Houston, but from Memorial Day through Labor Day she led an idyllic life roaming the hills, riding horses, swimming, and playing in the elements.

Boortz was always drawing, and recognition for her artistic talent began in the sixth grade. After that, she never considered another path for her life. She studied with Charles Umlauf at The University of Texas at Austin where she received her BFA (1970) and MFA (1974) with a focus on sculpture and drawing.

Early on, as a mother of three children, Boortz pursued her love of sculpture in any spare moment and gifted family and friends with funky objects made from found wood. In the caricature tradition of Hogarth and Daumier, Boortz would perch carved or modeled faces on sticks and add carved hands. In the 1980’s she began making more ambitious works with found wood elements. A self-described “Urban Archeologist,” she is always looking down on her walks to collect recyclables which are often applied to the work.

Her sculptures are portraits and faces are the most essential feature to Boortz, whether they are bird, animal, or human. Her focus on the face was reinforced upon seeing the portrait of George Washington by Gilbert Stuart with its finished face and sketchy torso. That combination is echoed in Boortz’s sculpture: keen attention to detail in the modeled head with an almost abstract rendering of the body based on the whim of the found wood.

Her sculpture presentation was liberated when she learned to incorporate welded features in her intricate work at a welding class taught by Art Shirer at the Creative Arts Center. More than 15 years later she still uses the CAC as her welding studio.

There isn’t a bare spot in her studio, layered floor to ceiling with materials, tools, relief figure studies, and reference books, which overlooks a neighborhood pond where she observes the antics of birds. Boortz quips, “I never met a stick I didn’t like.” When a piece of wood talks to Boortz, suggesting a bird or owl body shape, she perches it on a steel limb or suspends it in flight. Wings, feet and leaves are cut out of steel and a vice used to hammer in details. After the setting is staged, she models the features of the head in terracotta and then fires it in her kiln. The last step of the lengthy process is the painting.

Fans have flocked to her studio for years when she participates in the East Dallas Open Studio tour. Red Bud Gallery in Houston gave Boortz her first solo exhibition in 2001. She has participated in numerous exhibitions at the Bath House Cultural Center in Dallas, Buchanan Gallery in Galveston, and annual Texas Sculpture Association shows. In 2006, we happened upon one of her sculptures at an exhibition in Oak Cliff that was curated by J R Compton. This is her first solo exhibition at Valley House Gallery & Sculpture Garden.