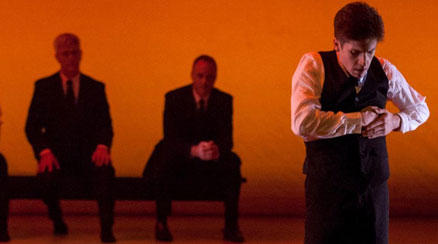 “Between dreams and death, he waited for her homecoming.” This quote from poet Duane Michaels aptly sums up the Bruce Wood Dance Project’s “My Brother’s Keeper” that was staged at the Montgomery Arts Theater at Booker T. Washington High School for the Performing and Visual Arts March 15-16.

Exploring the dynamics in male relationships, “My Brother’s Keeper” illustrates these elements through the bodies of 10 dancers, singer Gary Lynn Floyd, actor Jac Alder, and the words of Michaels—whose poetry was adapted to create a loose lyrical script adding a reflective and personal aspect that broke up the solemn moments of movement that were heavy in concept and emotion; yet, light on their feet.

Dancer Albert Drake demanded attention with his emotional capacity and control of movement in his first solo and accompanying trio with Dallas Blagg and Harry Feril. Dancer and Associate Choreographer Joshua L. Peugh delighted with his disarming solo that integrated Gaga dance techniques with a modern vocabulary. But just as something strange and intriguing was beginning; the movement was gone, quickly dissolving into a new phrase work. The gestural language created remained implanted in space, but only to return again near the end of the evening, and after too long of a wait.

Although “My Brother’s Keeper” has all the right element of a narrative—a beginning, middle, and end—the climax came too late and too quickly. In the midst of a dynamic ensemble movement utilizing all parts of the dancers’ bodies from the pounding of their feet to create a driving percussion rhythm to short outbursts of vocalization to an all out display of athleticism and virility, we reached the pinnacle of this performance. However, we had to wait nearly an hour, only to be rewarded with a return to the same repetitive adagio music courtesy of Philip Glass.

Happily, the ending was an intimate and endearing duet from Peugh and Larry Lane that clearly remarked on the relationships between a father and son. The ease in which they moved together in the tender moments of love, and the aggression they expressed while struggling to gain power over one another, most eloquently displayed what Wood was trying to express (as stated in the program notes from the choreographer himself)—“This dance is about reminding men of their own humanity and it’s impact on other men…I like being a man.”

-DANIELLE M. GEORGIOU
Ms. Georgiou is the Artistic Director of DGDG (the Danielle Georgiou Dance Group), and directs the dance department at both Eastfield College and the University of Texas at Arlington.