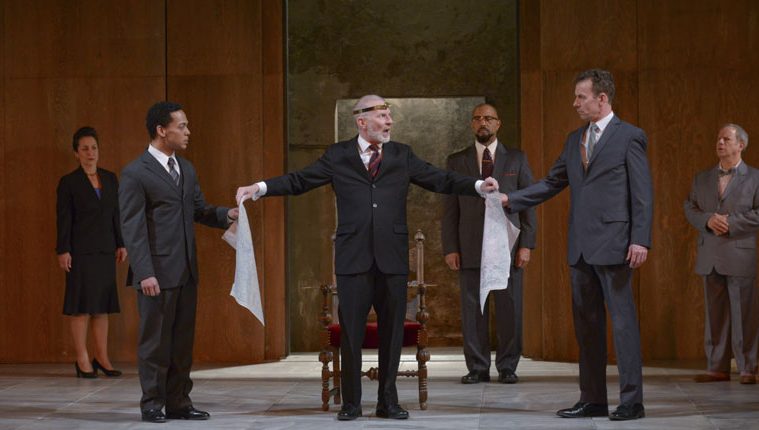 Dallas Theater Center will conclude its four-year Shakespeare cycle with one of the playwright’s greatest tragedies King Lear, a co-production with Trinity Repertory Company and directed by DTC artistic director Kevin Moriarty.  This production brings together members of DTC’s and Trinity Rep’s acting companies for the first time in years, resulting in a masterfully acted play about family, aging and the responsibilities of power. King Lear opens tonight, Friday January 25, 2013, at the Wyly Theatre in downtown Dallas for a month’s run.

This tragedy is the final play in Moriarty’s four-year Shakespeare cycle.  Other plays in the cycle include The Tempest (romance) in 2011-12; Henry IV (history) in 2010-11 and A Midsummer Night’s Dream (comedy) in 2009-10. A+C asked the director to reflect on his experiences with The Bard.

A+C: What was the first Shakespeare play you ever read?

KEVIN MORIARTY: The first Shakespeare play I read was Romeo and Juliet when I was in 7th grade. Frankly, I found it hard to understand and quite dull. Then I saw a production of Hamlet the following year at a theater in Chicago. I was instantly hooked. I loved how the words sounded, the action (ghosts! sword fights!), and the visceral intensity of the acting. I haven’t lost that love in all the years since.

A+C:  What is your favorite Shakespeare play and why?

KM:  King Lear and The Tempest are tied for my favorite. Both are a profound examination of family, moral responsibility, and reconciliation. Lear is deeper and more painfully truthful in its insights, but Tempest ends with a joy and hope that eludes the characters in Lear, so I think of them as two sides of the same coin.

A+C:  Explain how Shakespeare has been an influence on your personal life.

KM: At some key moments of my life I have found deep resonance in Shakespeare’s insights about being human: falling in love for the first time when I was young, or coping with grief at the death of a parent, or grappling with the powerful desire for revenge against the necessity of mercy. In each of these cases, other than the Bible, the plays of Shakespeare feature lines, poetry and insights that I turn to again and again, and as I age I respond to them differently. Also I love their theatricality. The funny parts still make me laugh and the sad parts still make me cry. Few plays can have this impact on me year after year. Their magic never wears off.

KM: Lear is truly a timeless tale. It’s not only great theater – filled with action, poetry, and even humor – but, more importantly, it reveals the profound interconnectedness of things, within ourselves, our families and our world. If we take these things for granted, we run the risk of destroying that balance within ourselves, amongst those we love, and within our country. For me, personally, I am also struck by the deep truths portrayed on stage about aging and the ties that bind parents and their adult children together — both good and bad — as we age.

A+C:  This production completes a DTC cycle, but what other Bard plays would you eventually like to direct for DTC?

KM: All of them! With the completion of this four-year cycle we won’t be producing another Shakespeare play next season, and over the coming years there are other great classical writers I’d love to direct (including Moliere, Ibsen, and Euripides). But my personal artistic goal is to direct all 37 of Shakespeare’s plays before I die. Henry V, The Comedy of Errors, and Julius Caesar are near the top of my list right now, though honestly it changes daily!

Tickets to the presentation of King Lear by Dallas Theater Center are available for purchase online: