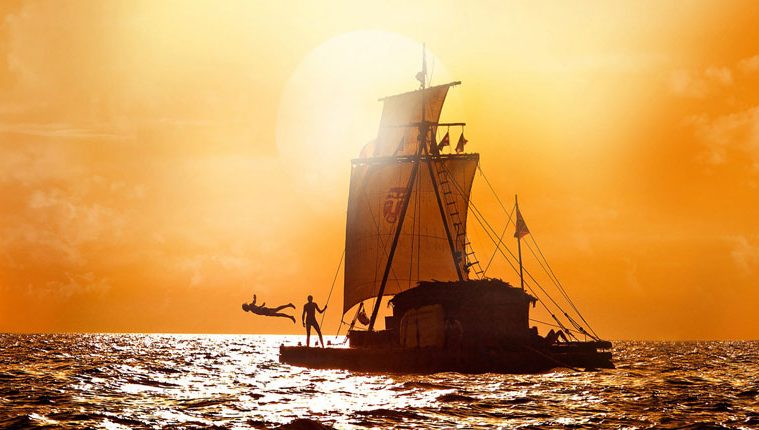 Norwegian adventurer Thor Heyerdahl’s 8,000-kilometer voyage across the Pacific Ocean on the balsa raft Kon-Tiki in 1947 stands as one of the greatest post-World War II feats of exploration, and cemented his standing as a legendary adventurer.

Heyerdahl’s book about his experience became a bestseller. It was published in 1948 as “The Kon-Tiki Expedition: By Raft Across the South Seas,” later reprinted as “Kon-Tiki: Across the Pacific in a Raft.” A documentary motion picture about the expedition won an Academy Award in 1951.

Now, a glossy big-screen version sails into local theaters, a product of Norwegian filmmakers Joachim Rønning and Espen Sandberg. When the movie premiered last year in their homeland, it broke box-office records. And while most American audiences will label the 118-minute voyage as a bit old-fashioned, it nonetheless is also a beautifully shot and at times exciting tale filmed mostly in exotic locations. 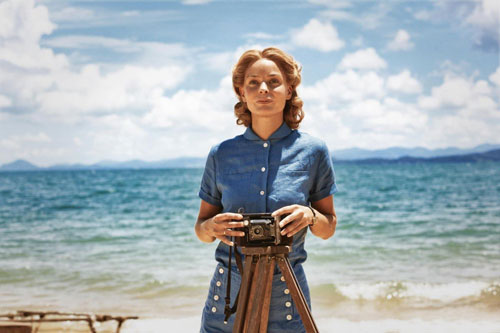 Directors Ronning and Sandberg begin with Heyerdahl’s childhood in his hometown Larvik, in which he fell through the ice trying to cross from one ice floe to another. The scene conveys the mix of curiosity and recklessness that defines the older Heyerdahl. Pal Sverre Valheim Hagen’s portrayal of Heyerdahl juxtaposes his gangly, cheerful looks and charisma reminiscent of Peter O’Toole’s in the classic “Lawrence of Arabia.” To say the camera loves the Norwegian stage and screen actor would be an understatement, especially given how dabbled sunlight gives him a god-like aura. Portraying his left-behind wife, Agnes Elisabet Hilden Kittelsen also radiates star power in her few scenes that concisely deliver a sly combination of both heartbreak and pride in her husband’s mission.

But the thrust of the film is set on the open sea, where Heyerdahl and a few friends are adrift to face the odds. During the three months aboard the primitive vessel named after Inca god of Sun and storm, the crew is met with setbacks in the form of storms, sharks, and other perils of the open sea. Yes, splashes of last year’s “Life of Pi” wash over the proceedings, but this is filmmaking done primarily on location (in Malta, Thailand and the Maldives among other lush locales), void of blue-screen and over-dependence of computer effects. 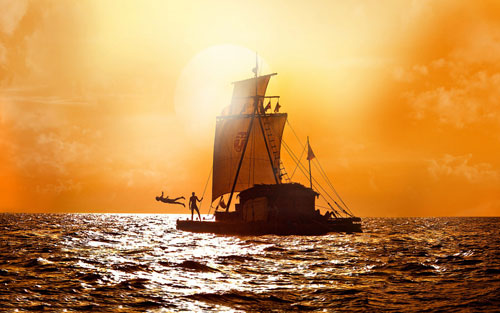 But just as the sea dwarfed the six men on the Kon-Tiki, the movie’s focus on its epic subject matter also minimized tensions among the characters. Much of the conflict is portrayed in a subdued manner, such as the effects of cabin fever among the Kon-Tiki’s crew. The film also skirts entirely the persuasiveness of Heyerdahl’s hypothesis about the populating of Polynesia, preferring to stick to the simplistic notion that his voyage somehow proved it—though that’s hardly the case.

Nonetheless, “Kon-Tiki” is a nice-looking film, with luminous cinematography by Geir Hartly Andreassen and expert period detail in the scenes on land. And it’s hard not to swoon at those ultimate travelogue that flashes up on the screen. And no computerized tigers to worry about, either.