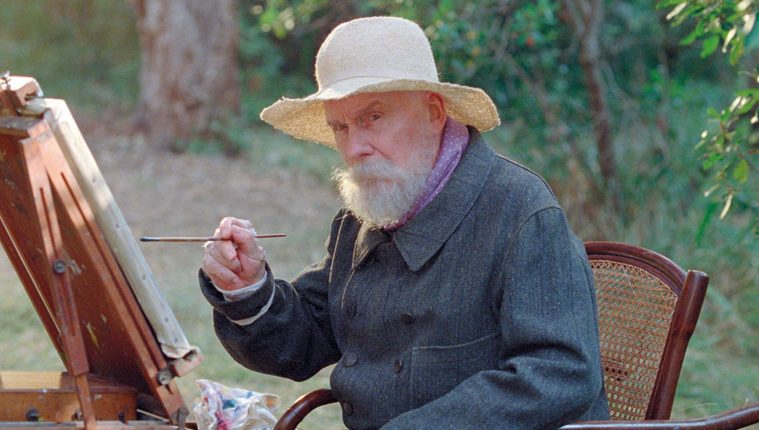 Set on the French Riviera in the summer of 1915, “Renoir” (based on a book, “Le Tableau Amoureux,” by Jacques Renoir) is a beautifully shot film taking the viewer into the world of the renowned painter and impressionist Pierre-Auguste Renoir and his relationship with his middle son and his last model Andrée, a 15-year-old mouthy redhead played by Christa Théret who most decidedly upsets the entire household when she arrives.

When the film opens Renoir is 74 years old and in declining health, but when Andrée comes to him to model saying she was sent by his wife (but actually recommended by Henri Mattise) he becomes alive again.  Andrée is full of life and love and not too long after her arrival meets his son Jean Renoir who in turns is inspired to become a filmmaker, eventually a famous filmmaker, because Andrée has a dream of becoming an actress.

However, first she must inspire the old man with her energy and passion for life easily becoming his muse.  Indeed, a free spirit in Renoir’s home, she takes the old painter to a new level and his son, Jean, easily falls in love with her too.

A film by Gilles Bourdos’ the style certainly captures the time in Renoir’s beautiful home in the countryside at this farm, Les Collettes on the Cote d’Azur while World War 1 rages on, but in his world there are only teams of women servants to cater to his every whim after his wife Aline dies. Renoir himself dies just four years later in 1919.

While Renoir has three sons, Pierre played by Laurent Poitrenaux, Jean played by Vincent Rottiers and a teenage son, Claude played by Thomas Doret, it is invariably Jean that Andrée falls in love with as he comes home from the war so that he can recover from a wound that almost costs him his leg.

At the same time, Renoir is having his own pains struggling with painting since he is plagued by arthritis, but alas, his muses’ skin offers him the “velvety texture of a young girl’s…” since it so absorbs the light.

“Flesh! That’s all that matters,” Renoir proclaims and he sets out one last time to prove it with this, his latest muse at his side.

Shot by Taiwanese cinematographer Mark Ping Bing Lee the mood is sensual with the landscape taking as much of the center stage as the actors and the story.

Also of note, while the story is true, the moments threading the outline together do not take the viewer into unnecessary trysts, but instead the underlying theme is the kind of effect Andrée has on the entire household from the female caretakers and their resentment of her to Renoir to his son, Jean who Andrée does finally marry having led him in the direction of filmmaking where he does become successful.

In the end we find that she too, ends up making 15 silent films under the name Catherine Hessling before she and Jean eventually divorce in 1931 with his classic films including “Grand Illusion” and “The Rules of the Game.”