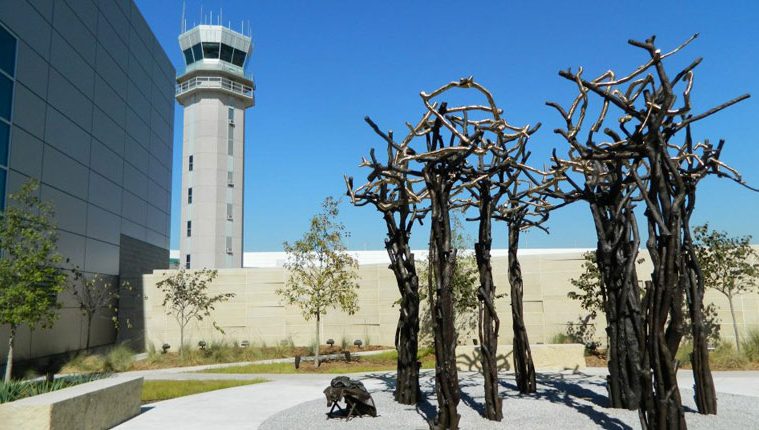 The works are prominently displayed and complement the airport’s contemporary architectural design. The Love Field Public Art Program will include 15 pieces upon completion: 11 new works and four original to the airport.

Created through a dynamic partnership between the City of Dallas Office of Cultural Affairs, Southwest Airlines, the Department of Aviation and the Love Field Modernization Program, the Love Field Art Program required the dedication of citizens who served on selection panels. “We received more than 400 submissions for the program,” says Kay Kallos, Public Art Manager with the City of Dallas Office of Cultural Affairs. “The committee, which included neighborhood association members and professional artists, met for about a year with the Cultural Affairs Commission having final approval.”

Lane Banks is a Dallas artist whose work is exclusively abstract. His Untitled piece at the entrance tunnel to the ticketing hall is completely geometric. The terrazzo floor design is a series of rectangles. He describes the work as “completely conceptual and systematic in practice.” Banks work has been featured in exhibits at the McKinney Avenue Contemporary, the Dallas Public Library, the Trammel Crow Center, the Bath House Cultural Center, and can be found in the Neiman-Marcus Collection.

Martin Donlin works in glass. His piece for the Love Field Art Program relates to the physical characteristics and historical heritage of the airport. Blueprint of Flight is a glass wall mural near the terminal exit and can be viewed from the public space on the Love Landing. It features an image of Moss Lee Love, for whom the airport is named, overlaid with poetry throughout. Donlin creates works that are welcoming and accessible, with a sense of adventure.

Dixie Friend Gay’s 60-foot mural of the North Texas sky and Texas wildflowers dominates the wall near the security checkpoint. North Texas Sunrise brings a heightened awareness of the Texas landscape. Gay’s work is fueled by observations of the natural world. She loves to travel to rural areas and explore landscapes, and hopes viewers will take away a heightened awareness of our beautiful wildflowers. Gay has created other works of public art for airports, universities and the Port of Miami.

Brower Hatcher created Sky for the Love Field Art Program. A whimsical torus of intertwined fiberglass rods, the sculpture is embedded with 3000 flying objects ranging from modern airplanes and biplanes to birds, bees and clouds, with small LED chip lights that create atmospheric effects. Brower has built more than 50 public art projects throughout the U.S. He is the recipient of 3 National Endowment for the Arts Fellowships, a Guggenheim Fellowship and an honorary Ph.D. from the State University of New York.

Paul Marioni creates art that sometimes appears to him in dreams. In Flight is a terrazzo floor installation of birds flying over a changing skyscape. A glassworker who enjoys pushing the limits of the technique, he enjoys the way glass captures light in service to the image. Paul is a Fellow of the American Crafts Council and the recipient of 3 fellowships from the National Endowment of the Arts.

David Newton created the Dallas History Medallion for the Love Field Art Program, in the ticketing area on the lower level. Newton is a classically trained sculptor who has dedicated his craft to transforming ordinary people and historical moments into unforgettable, timeless moments of beauty. Newton also created sculpture for The Freedman’s Memorial and Fair Park in Dallas, the Veterans’ Memorial in Plano, and El Vaquerro de Fort Worth in the Fort Worth Stockyards.

Sherry Owens is a Dallas artist known for her crepe myrtle sculptures and other outdoor works in bronze. For the work Back in a Moment, Owens created a meditative space where viewers can enjoy the peacefulness of the trees and contemplate the WWI vintage goggles and jacket of Moss Lee Love, who was killed in a flight training accident prior to WWI. Owens’ work is in many corporate and private collections throughout Texas and in Hawaii.

Original works at the airport include One Riot, One Ranger, by Waldine Tauch, which returned to Love Field last month after a three year hiatus due to remodeling. The Spirit of Flight statue, by Charles Umlauf, has been a permanent figure near the main entrance of the airport since its installation in 1961. The world map, installed by Luighi “Tony” Flabiano, can be found on the floor outside of the new security checkpoint. Originally installed in the 1950s, it was the largest terrazzo design of its time. The map was restored during the construction.