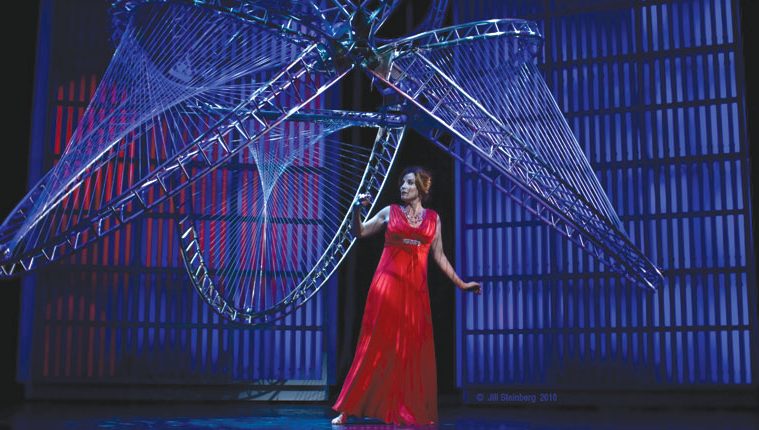 The Dallas Opera is returning to four mainstage productions for the company’s 2013-2014 season in the Margot and Bill Winspear Opera House at the AT&T Performing Arts Center. The 57th season consists of works spanning three centuries, each of which challenged the musical or dramatic conventions of their day.

Announced in mid-February, the next season will include two much-loved classics, in addition to the Dallas premiere of an important twentieth-century work for the opera stage. This Dallas Opera season will also include the regional premiere — and, worldwide, only the fourth set of performances — of a thought-provoking new twenty-first century opera. Among the upcoming season highlights are two major American debuts; however, every TDO performance will feature internationally renowned singers, conductors, and other artists of the top rank. Productions will be performed in their original languages, with English translations projected above the stage, as usual.

In the wake of a five-opera season in 2011-2012 (four mainstage, plus one chamber opera), the Dallas Opera made a conscientious choice to temporarily reduce the company’s season to three mainstage productions this current cycle, although they have also produced smaller events, concerts, and recitals to fill the seasonal schedule.

“As part of my commitment to this company and the people of Dallas and North Texas,” said Dallas Opera General Director and CEO Keith Cerny, “I am determined to lead the Dallas Opera in an artistically vibrant yet fiscally responsible way. The board and I believed, quite strongly, that it was incumbent upon us to address, head-on, the effects of a recessionary economy and reduce the season for a single year.”

The belt-tightening has been noticeable at most arts organizations as patron donations, corporate funding, and ticket sales declined in the last few years. Several opera companies — the Connecticut Opera, Baltimore Opera, Cleveland Opera, Spokane Opera — have actually closed in the past few years as a result of lagging income. Thankfully, Dallas Opera is looking forward.

“Now, we’ve paid our dues,” says Cerny, “without any loss of artistic quality. And it’s time to grow the season again while working to achieve sensational new heights of artistry, innovation, imagination and design.”

Opening the season, Carmen is the woman no man can resist and, as performed by mezzo-soprano Clémentine Margaine in her American debut, who would want to say non? Hailed as “Best Newcomer” in the 2011 French Classical Music Awards, Margaine will have her hands full with two head-turning, heart-melting Don Josés: tenors Brandon Jovanovich, who sang Pinkerton to great acclaim in his most recent appearance here in 2010, and Bruno Ribeiro (making his company debut). Featuring a classic Jean-Pierre Ponnelle set design from the San Francisco Opera, this production will be conducted by Emmanuel Villaume and directed by Bliss Hebert.

Next, science fiction and poignant family drama combine in one of the most stunning, cutting-edge operas of the 21st century, Death and the Powers. Directed by Diane Paulus, the show is being designed by Alex McDowell, who did Steven Spielberg’s Minority Report, and conducted by Nicole Paiement.

This visually spectacular robot pageant by MIT Media Lab’s Tod Machover tells the story of a terminally ill billionaire, sung by Robert Orth, who downloads his consciousness into “the System” and proceeds to use all his powers to persuade his loved ones to join him there. Without bodies, without the possibility of touch, sex, suffering, and death, the story asks: are we still genuinely human?

“Programming this important and genre-stretching work by Tod Machover underscores the Dallas Opera’s unwavering commitment to significantly broadening our programming, both by presenting 20th and 21st century works as well as lesser-known works deserving a permanent place in our repertoire,” said Cerny.

Next on the schedule, Erich Wolfgang Korngold’s Die tote Stadt, the tale of one man’s dark obsession with the woman he loved and lost. Featuring state-of-the-art projections and composed by a prodigy who evolved into one of the great masters of music for the Golden Age of Cinema (The Adventures of Robin Hood, Deception, The Sea Hawk), Die tote Stadt features an extraordinary cast that includes Jay Hunter Morris in the role of Paul, fresh from his triumphs as Ahab in the San Francisco Opera revival of Moby-Dick and as Siegfried in the Met’s new Ring Cycle; Ann Petersen in her American debut as Marietta; and Morgan Smith, the poignant voice of reason in TDO’s world premiere production of Moby-Dick, as Fritz.

Rounding out the 2013-2014 season, Rossini’s delightful 19th-century romp, The Barber of Seville. Even after two hundred years, its popularity on the modern opera stage attests to its comic greatness.

The all-star ensemble includes acclaimed mezzo-soprano Isabel Leonard as the gorgeous-yet-spunky Rosina, lyric tenor Alek Shrader as the love-struck Almaviva, and commanding Turkish bass Burak Bilgilias Don Basilio in their much-anticipated TDO debuts. It also marks the welcome return of the inimitable Donato DiStefano, a comic veteran of previous Dallas Opera productions of Barber and La Cenerentola, in a role he has sung all over the world, Dr. Bartolo.

Current subscribers will have first choice of seats, beginning in early March. New patron orders will take place in June, with single tickets on sale late in the summer.