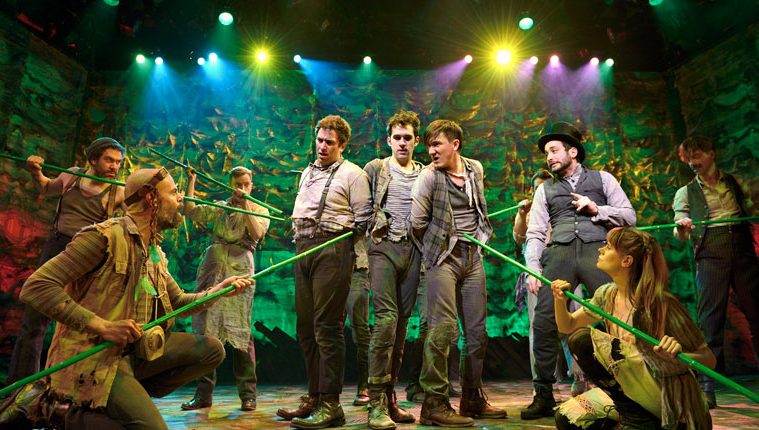 AT+T Performing Arts Center has announced it’s full slate of Broadway shows coming next season for the Lexus Broadway Series. The most touted title, The Book of Mormon, a religious satire, was announced months ago. Created by South Park creators Trey Parker and Matt Stone, most critics have hailed the wild musical-comedy. It won nine 2011 Tony Awards.

David Alan Grier and the cast of the Tony Award winning Broadway Revival of The Gershwins’ PORGY AND BESS. Photo by Michael J. Lutch.

But other gems are also making a bow in North Texas.

A prequel to the story of the boy who refused to grow up, Peter and the Starcatcher provides a backstory for the character Peter Pan. Nominated for 9 Tony Awards, including Best Play, it took home 5 statues. Winner of the 2012 Tony Award for Best Revival of a Musical, The Gershwin’s Porgy and Bess includes such legendary songs as “Summertime,” and “I Got Plenty of Nothing.” Originally conceived by George Gershwin as an American folk opera, Porgy and Bess premiered in New York in the fall of 1935, and is considered an American classic. This newer version has been revamped to musical-theater style.

The Original Broadway cast of PETER AND THE STARCATCHER.
Copyright O&M Co.

Rounding out the season is an updated version of Godspell, a musical based on the Gospel of Matthew and interspersed with a variety of modern music; and a big, splashy show based on a hit animated film, Beauty and the Beast.

“I’ve been studying Prokofiev’s Piano Concerto No.3 in C Major for a little over a year,” Ritter said after winning. “I was nervous [going into the competition], but my mindset was to enjoy the opportunity to play and to be able to execute my interpretation to the best of my ability. I’m so very excited and grateful for the opportunity to play with the Fort Worth Symphony in the 2013-2014 season!”

Public, private and home-schooled high school students from the greater Dallas, Fort Worth and surrounding areas participated in this year’s competition which required students to explore and experiment with the theme “Conflict and Resolution.”  This year over 27 high schools participated in the contest with 180 entries, a record number.