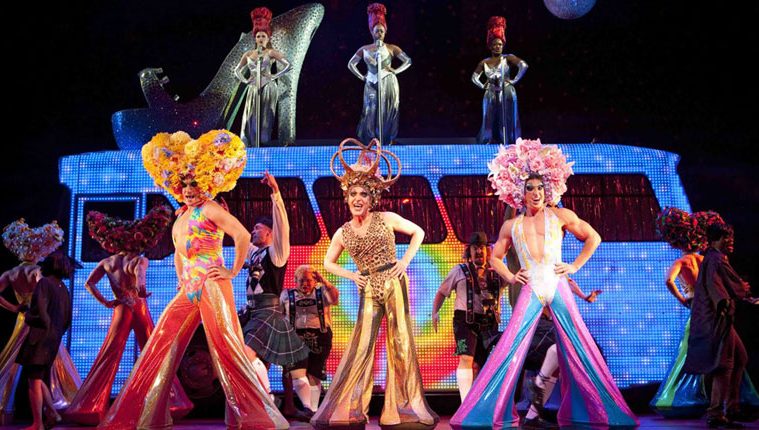 Priscilla Queen of the Desert The Musical 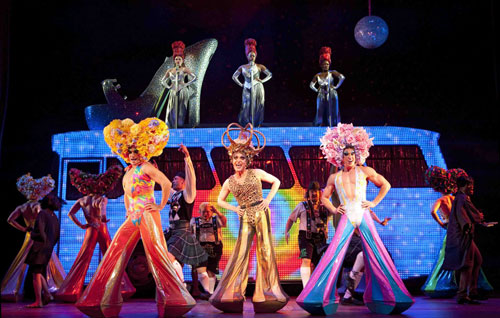 Wade McCollum, Scott Willis and Bryan West bring color and flash (not to mention, some flesh) to “Priscilla Queen of the Desert The Musical.”

It doesn’t matter that the plot is minimal, that the music is loud, or that the acting is rote. It’s the outrageous 500 costumes that are the star of the touring show, “Priscilla Queen of the Desert The Musical.” Easy to see why the designs won a Tony, and also an Oscar for the 1994 film in which this jukebox musical is based.

Now mind you, the show is actually a lot of fun, hi-energy and funny, with some 20 dance-floor favorites flushing out the story. If disco is not your thing, stay away.

Since the same writer as the film penned the production, the plot sticks to the tried-and-true formula of friends on an extended road trip, aboard a battered bus in the thick of the Australian outback. Of course, the friends are two drag-queens (Tick/Mitzi and Adam/Felicia) and a transexual (Bernadette) heading west from Sydney aboard their lavender bus, Priscilla. En route to a casino gig, it is discovered that the woman they’ve contracted with is Anthony’s wife and small son. Their bus breaks down, and is repaired by Bob, who travels on with them. It’s a staged road movie with attitude to spare, and lots of sweaty toned bodies and suggestive dance moves. 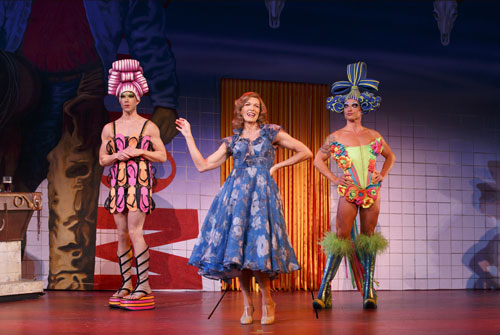 From “Priscilla Queen of the Desert The Musical.”

Wade McCollum, last seen at Dallas Theater Center in the wonderful production of “Cabaret,” holds his own as Tick/Mitzi. His stage presence solidifies him as a strong leading man (in a dress and out) and his performance during “You Were Always On My Mind” is powerful. Bryan West steals a few scenes as the hilarious, young, and mischievous Adam/Felicia. But it’s Scott Willis as Bernadette, the aging drag queen looking for love in all the wrong places, which brings some depth and needed angst to this perfumed story.

But all that is secondary to the parade of songs (“It’s Raining Men,” “I Will Survive,” “Hot Stuff,” among other hits) and colorful and wondrous outfits that really spark the energy of this crowd-pleasing production. The film carried more substance; the stage show is just happy to make the audience smile and tap their feet.

“Priscilla Queen of the Desert The Musical”
Dallas Summer Musicals
Music Hall at Fair Park
On stage through May 26, 2013.