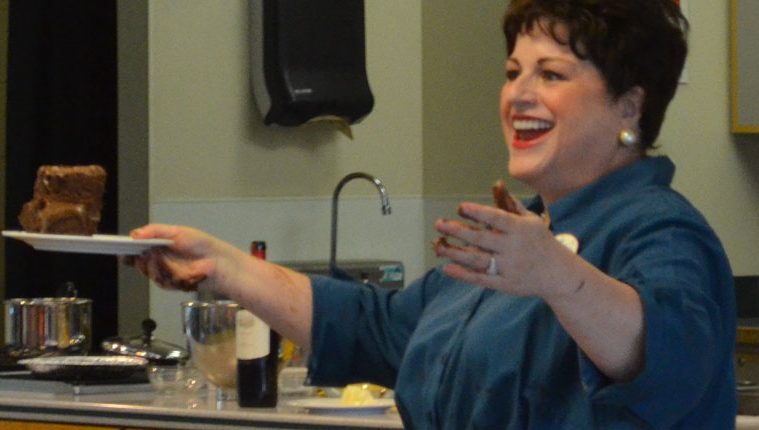 At the heart of Bon Appétit are affection, physician admiration, and respect. The signature sign-off phrase of one of television history’s largest figures, Julia Child, is the title of a curtain-raiser written in 1988 by composer Lee Hoiby, with a libretto cobbled together from two episodes (from 1961) of The French Chef by Mark Shulgasser. It was written for another of television’s towering figures, Jean Stapleton, an actress for TV, (All In The Family’s Edith Bunker) and Broadway musicals that could bring great depth and pathos to seemingly one-note characters. Hoiby had written another one-woman, one-act piece for Stapleton called The Italian Lesson about a busy New York socialite, in 1985. Stapleton premiered Bon Appétit at the Terrace Theater at the John F. Kennedy Center for the Performing Arts in Washington D.C. The cooking “demonstrations” in those performances were pantomimed.

The Dallas Opera cleverly brought this “confection” to the Dallas Farmers Market demonstration kitchen, complete with overhead mirrors (for seeing and shooting close-ups of food preparation) a camera operator with monitor, (more on this later) and a stage manager, who instructed the assembled “studio-audience” to “please take your seats” for the live taping of the episode, while calling offstage to “Mrs. Child, two minutes, please.”

Mezzo-Soprano Susan Nicely is rightly a perennial favorite for Dallas Opera audiences. She has a velvety, assured tone, a broad smile, and a knack for engaging the audience in bales of laughter. From her first appearance “on set” she held the delighted audience in her grip. The music is charming and unaffected, doesn’t demand much of its audience, thankfully, and provides the singer with plenty to showcase a dynamic range and sensitivity without losing the deliberateness and dry wit of the central character, Julia Child.

If I can find fault with Ms. Nicely’s performance, while it is imbued with her comedic timing and hearty smile, she reminded me more of Lucille Ball as Lucy Ricardo, as interpreted by Kaye Ballard, two other television legends and Broadway stars. Very funny stuff to be sure, and broadly appealing, but in some places not very kind to the legacy of Julia Child, who was not afraid to take a sip of an appropriately paired wine while toasting her television audience, nor was she reluctant to let you know that mistakes happen from time to time in all kitchens, and that to recover from them gracefully allowed non-cooks to be more adventurous rather than timid about cooking at all, let alone the “French way.” These attributes were expressly forgotten in favor of farce while Ms. Nicely made more chocolate cake batter go on the countertop than in the bowl, tossing flour on the stage manager’s head in the “self-cleaning kitchen” and, rather perversely, swigging wine from an upturned bottle and promptly falling asleep in a chair downstage (captured on the black and white monitor, handily, since Ms. Nicely is shorter by at least a foot than Julia Child) during a “commercial break.” Decidedly more Dan Aykroyd than Meryl Streep.

I applaud the Dallas Opera for making what truly felt like an event out of a mere twenty minutes of music, and for bringing more people to Opera, in general, and the Farmers Market in the process—I only wish they could done it with a touch more kindness.