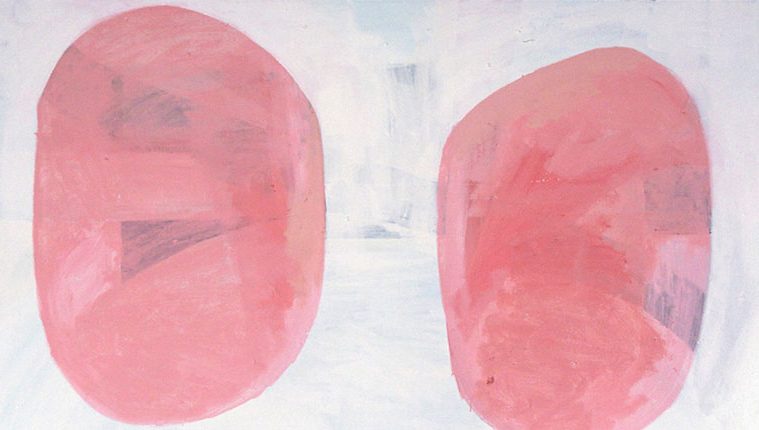 David Aylsworth had me at the title of his show, “Five, Six, Seven, Eight,” a reference to the director’s constant countdown in the musical A Chorus Line.  Then I saw the work – seventeen non-objective paintings, one for each actor and actress in the Broadway musical.  It’s a stunner of an exhibition. Like a rehearsal, Aylsworth paints in stops and starts, painting over sections of the canvas, leaving underpainting so we can see his progress.

The surface texture in Aylsworth’s paintings honestly represents the toil involved in producing them.  In the production of the work is its’ spirit and shows the soul of the painter.  Aylsworth is a mature colorist. Most of the pieces feature just a few colors: pink on white; light pink, brilliant red, olive green, and white; blue, yellow, and white.  The restraint he shows by zeroing in on a few colors results in a cohesive collection of dreamy work.

There is a good deal of pink in the show, starting with the cover art from the pretty show catalog, Undulating Hips.  Here, two large pink orbs float on a white background and suggest, well, if not hips, certainly someone living.  Aylsworth lets us see his underpainting and how he eventually settled on the finished painting.  In other work, he plays pink off sea foam green, red, or olive green and yellow.  His paint is mixed on his palette – not on the canvas, but the geometry isn’t so rigid that we don’t see an untidy line here and there.  There’s a humanity in that which makes these very agreeable paintings – art to be enjoyed.

One of the larger pieces, Somerset Maughamwise, looks like sheet music with its combination of circular shapes against straight lines.  It reminded me of those wonderful mid-century cut paper music animations. In this one, Aylsworth uses a deep eggplant color to fool the eye into thinking it’s black at first glance.  Complimented by orange, green and a wonderfully buzzy sea foam/pink passage – this painting sings.

My favorite piece, Ecdysiast, is a simple square painting of yellow, blue, and white.  What’s cool about this painting (other than the title, which means stripper) is the way it showcases Aylsworth’s fascination with positive and negative space.  He is genius with manipulating the viewer’s eye – mostly in his use of white – to question spatial relationships in the paintings.  The shapes in this painting are lyrical and organic and they literally dance on the canvas.

This is a sparkling performance of a body of paintings with quirky titles and show biz metaphors.

—KENT BOYER
Kent Boyer is a graduate student in the arts and humanities, an educator, and writer.