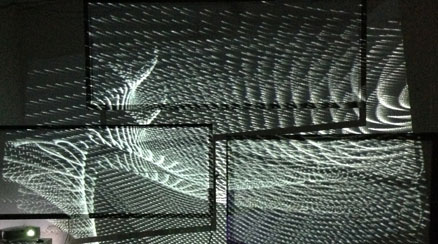 Impressive works require sensible aspects that either allure or intrigue, here and a conceptual couching that enhances or plays upon those sensible aspects. Put another way: you walk in and immediately enjoy or are pleasantly perplexed by what you see, and then, as you start to discuss it, think about it, maybe read some literature concerning it, you find that you like the work even more. Andrew Blanton’s MFA show “Panoptics,” at Oliver Francis Gallery, demonstrates this impressive progression.

The first piece, a small sculptural object sitting on a pedestal, is centrally placed and solitarily lit (and if you look up, which I did not think to do, you would find the work surveilled by security cameras). As an object its appeal arises primarily in an unusually precise geometry, and a rendering style approaching the mechanical. It’s faces jut and tend toward the triangular. It’s nice, but only as a starter.

When you enter the second or middle room the work becomes compelling, absorbing you into a dark environment illuminated only by the dual projections of a torus (which is basically a geometric solid generated by a revolving circle in space with a revolutionary axis coplanar with the circle). It’s moving, rotating, all about the walls and some suspended screens (think doors here, not computers) that foster a sense of three-dimensionality. The sound element submerges you even further into the fantastic. And all the while it changes and becomes larger, or seemingly more distant and constellatory, it darkens or grows entirely white — is there a set pattern to these changes?

Finally, in the last room you find a set of monitors receiving a feed from the cameras in the first room (which you probably didn’t notice). At first I thought this element too gimmicky, especially given the show’s title, “Panoptic,” meaning “all seeing,” or “seen by all.” It derives from “Panopticon,” a term innovated by Jeremy Bentham who had designed a prison wherein everyone housed there was invisibly monitored, yet they couldn’t tell when or by whom. Foucault picked up and popularized the term in order to think about how surveillance relates to power — a topic interesting all by itself and only suspiciously employed otherwise. Still, something else is happening: Is there another relation between the three rooms? Yes.

It turns out that the introductory sculpture was “printed” with a three-dimensional printer (which explains the subtle nuances of its surfaces and edges). That which was once flat became spatial and dimensional. It functions as a cipher for the entire show; ways to take things flat and screened and give them dimension. Move to the middle room. The imagery surveilled by the cameras in the first room — which was you — was transmitted to the second room and processed with software that informed the changes you witnessed in the torus. Whether you knew it or not, you participated in what you saw. All three rooms are visually and conceptually joined by your very witnessing of them.

Blanton has simultaneously connected our fears of ubiquitous governmental surveillance with our always already networked life, in which we — as images — are ever responding and being responded to. Whether we are aware of it or not, we are constantly interacting, networking, influencing and being influenced, being processed by programs that select adds and apps for us, which connect us with friends and mates, which recommend products, services and activities.  Simply put, the “Panopticon” of Bentham has already been built and we gladly live in it. Yet instead of merely always being watching, we are also ourselves always watching.

Though Blanton’s view of this phenomenon may be less distrustful than this particular reading suggests, there is enough going on in and behind the work to support such suspicion. In any case, whatever your response is, the show and the reflections that it can educe are well worth your time.

There will be a closing performance with Mike Morris on Friday, April 5 at 11pm.