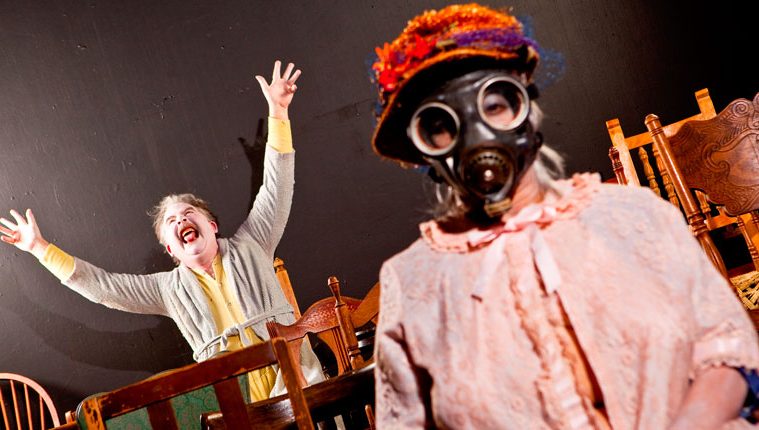 Lights up on an older couple in a large space with two chairs set in the middle. The man is standing on a box next to a window while the woman lights a couple of gas lamps. Scott Osborne’s wonderfully grubby set is certainly solid and detailed (nothing vague about it) considering it’s very difficult to determine what kind of structure the two are occupying. At the beginning, you really can’t tell if they’re indoors or out. As you begin to examine the surroundings, you realize there are 7-8 doors, and no walls. Two windows and the rest is doors. In a circle. From the onset it’s difficult to get our bearings and in The Chairs, renowned Absurdist playwright Eugene Ionesco likes that just fine. From start to finish The Chairs challenges our expectations and mocks conventions, while managing to be spectacularly entertaining, as the little married couple (referred to as “Old Man” and “Old Woman” in the program) inflate their meager existence in a grandiose way.

Like much absurdist theatre, there are elements of truth to be culled from strange behavior. “I want my mommy. I want my mommy!” weeps the old man, and the old woman comforts him, “I’m your wife, darling. I’m your mommy, now.” Dressed in Giva Taylor’s ingenious costumes, Raphael Parry and Rhonda Boutte’ suggest ghosts, clowns, but yes, also, the eccentricities of the elderly, with their often eclectic and playfully garish choices. Perhaps borrowing from Beckett’s Waiting for Godot, there’s something vaudevillian about the dialogue shared between the couple. She calls him “Monkey,” he calls her “Lamb.” She constantly reminds him of failed ambitions, he pleads to take comfort in what they have. Their verbal exchanges sound authentic, but carry elements of the facetious that are amusing and suggest more universal themes. They reminisce and muse about what might have been, yet defend the substance of their lives, insisting they did the best they could, considering obstacles like fate and caste and politics.

There’s a symmetry and strategy to The Chairs. So much of what seems ticklishly ridiculous on the face, carries subtextual moment. So much of what’s intended to be serious is undercut by gags and jibes. The two prepare for a party or formal event in which the Old Man will speak, but leave the lion’s share of this burden to a professional Orator. As guests arrive, the two fetch chairs, while conversing with them and offering amenities. “Can I interest you in a cracker?” There are no actual people occupying the chairs (just the two of them) and when God Himself (never identified specifically, in that way) arrives, the old man and woman are overcome. Now, God, of course, is invisible, but isn’t he always? And being ubiquitous, how do we know He’s not there? The Old Man steps up to justify his existence to an ostensibly empty audience of witnesses, peppering his remarks with homilies, adages, and trendy bon mots. Ionesco has fashioned a rather wistful comedy in The Chairs, suggesting we infer gravitas from a life that is actually, only a game of chance.