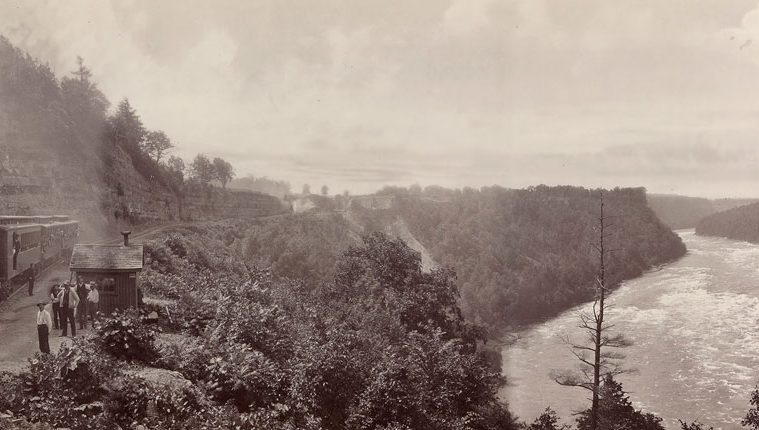 Big Pictures, on view at the Amon Carter Museum of American Art until April 21, is a splendid opportunity to parse our emotional — and, therefore, psychological — relationships with large-scale images. As the museum’s press materials point out, many people believe that a movement toward out-sized prints is a new phenomenon; however, that’s not the case. This immediately becomes clear when visitors enter the gallery and see the 40 works curated for the show. Most of the images are taken from the museum’s extensive holdings and cover a broad time span; they date from 1867 to works by artists still actively working. Moreover, two artists featured in the show are especially intriguing — Abelardo Morell and Misty Keasler.

Camera Obscura Image of Times Square in Hotel Room was created by Abelardo Morell in 1997. Morell made this remarkable piece by completely darkening a hotel room adjacent to Times Square with black plastic. The title tells the story. He turned the room into a camera obscura by piercing the plastic with a 3/8-inch hole and setting up a view camera to capture the images streaming through the aperture for two days. The result feels strangely arterial. It’s a flood of Coca Cola logos, traffic, and signage merging with the banal fixtures of that weirdly (un)familiar dwelling known to everyone — the hotel room. We discover a scissor cut-out silhouette, cheap lamps, the obligatory bedside phone, and a strangely sexy bed, roiling in lights and carefully made to be unmade.

The piece, literally, is a rip, a tear, a pocket of shadows and a no-man’s land. We’ve all been there. But this work has haunting specificity. It’s the language of America, a metaphor for Times Square — that most American of tawdry illuminations. But, still, it’s exactly that, an illumination. The image’s size creates a genuine collision of the outside world with the interior of the hotel. The work is raw and fabulously alive and shows us the space that opens up if we simply take time to interact with a huge, morphing, and highly tactile world.

Meanwhile, Misty Keasler, an artist who lives and works in Dallas, was reached for an interview regarding her work in the show, Magic Mountain, Payatas Garbage Dump, Manila, The Philippines. Created in 2006, it’s rich with haunting luxuriance and is stunningly sublime. By “sublime,” I mean it’s fraught with the import the 18th-century philosopher Edmund Burke described when he outlined the odd delight felt when we observe things typically deemed “ugly.” After all, a huge, toxic site is hardly usual subject matter for a work deemed aesthetically satisfying. Yet it’s precisely that. It’s a confluence of blue water and white plastic bags that resonate with icy malevolence. Next, an orange fire snags your attention before you move on to the smoky environs of local shanties. Lastly, you can’t help but engage the gaze of two men in the lower left corner. The latter takes no small act of courage because you’re left imagining their lives and the fact that they’re operating in a world that most of us have never witnessed. It’s the obverse of a Classical Arcadian and romantic landscape. In fact, it’s an ideal trope for a new ring in Dante — horrific and toxic. Yet it’s also oddly beautiful.

Here’s what Ms. Keasler revealed regarding her work .

A+C:  Could you offer some specifics about the site in Manila?

MK: This is a really large infamous dump in the center of Manila. It was originally a stream where people began dumping their garbage and, over decades, the city was dumping trash there and eventually it became a mountain. By the year 2000 the “mountain” was pretty steep and during the rainy season there was a landslide of garbage that engulfed a small village at the foot of the mountain. Over 300 people were killed. Most were never recovered.

The tragedy made international headlines and embarrassed the government. Since then, they have greatly improved the structural engineering around the site (for example the angle of the mountain is never more than 45 degrees and the gas emitted from the rotting trash is harvested). There is still a community and economy around the garbage. Many of the country’s poorest citizens live in homemade houses constructed from scraps around the base of the dump. They go into the site to scavenge for recyclable materials.

I had made a body of work at an infamous dump in the capital of Guatemala. Harper’s magazine asked if I’d be interested in shooting similar work in the Philippines for them — so I travelled to Asia, to Payatas.

A+C:  What were the challenges shooting there?

MK:  UGH! There are so many. This is a difficult subject matter in many ways. I always ask before shooting a photograph. It’s important to me that someone in the shot is complicit; I want them to be able to say “no” to me. With the photograph in question I didn’t ask the men washing plastic bags if it was ok with them due to our physical distance, but I did watch for a good amount of time first and made eye contact with them while holding the camera. They seemed very comfortable with me holding the camera and shooting and I took this as their complicity. It is important my subjects have dignity and permission is the first part of this for me.

I also struggle with the role of beauty in these photographs. Trash is ugly subject matter. I do have some shots that are really ugly. But I find them hard to look at for any given period of time. I think it is important to use beauty as a tool with difficult subjects to invite a viewer to spend more time with something possibly unsettling.

A+C:  Does anything else come to mind about why you shoot dumps?

MK:  I find them interesting — and kind of terrifying.

A+C:  How do you feel about that as a subject matter? Is there a larger import at hand?

MK:  Dumps provide an interesting portrait of our culture. For instance, I’m struck by the fact that I produce a lot of garbage. But I wasn’t that aware of it before. I put it in a nice waste bin out of site and twice a week it goes out on the curb for pickup. Beyond that, I don’t see it. That strikes me as odd. We consume much more than our counterparts in developing countries and yet our mountains of garbage are not only completely hidden from site, they are extremely difficult to visit and impossible to photograph. But our trash will continue to grow at an exponential rate as long as our economy is based on the constant need to buy items that are disposable or replaced in a short period of time. I visited Nigeria to photograph America’s e-waste — mostly used computers. Parts of Asia and Africa have become e-waste dumping grounds for us. And some of this trash is extremely toxic. In some of the shots from this body of work the trash looks like tidal waves. And, indeed, I think it is.

While this concluding verbiage is disquieting, it’s also monumentally important. Thus, the images at the Amon Carter aren’t just physically large. They carry heft that begs to be addressed. After all, Keasler is deftly posing questions that have, cruelly, gone unanswered. Thus, in an age when science is favored over art, perhaps people would be wise to give countenance to the important issues posed by images. They make us operate south of our overrated noggins and perhaps that’s precisely what’s needed. Go see for yourself — chances are you’ll find it, well, sublime.

Big Pictures continues through April 21, 2013 at the Amon Carter Museum of American Art.