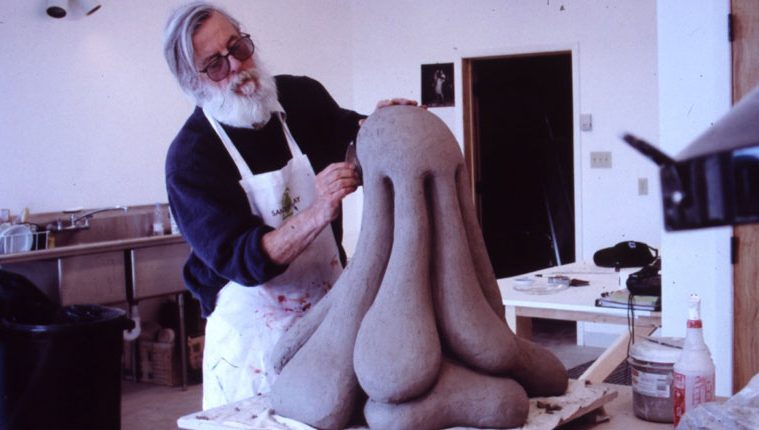 The Price of Beauty

Because of the caliber of the Nasher Sculpture Center, it is one of the three museums in this country — and the only sculpture museum — to host Ken Price Sculpture: A Retrospective, featuring over 100 of Price’s sensual, brilliantly colored and exquisitely finished ceramic sculptures. The show ends May 12.

In its close to ten years of operation, the Nasher has exhibited their sculptural treasures and mounted exhibits like this one that originated at the Los Angeles County Museum in 2012. Sadly, Price died six months before the opening. The show’s last venue is the modern/contemporary wing of Metropolitan Museum. To LACMA’s credit is the accompanying 288-page catalog with informative essays by critics and curators very familiar with the artist and his art. Plus, look for the beautiful commissioned color photographs of each piece in the exhibit. In 1967, Price was included in LACMA’s groundbreaking American Sculpture of the Sixties, and in 1978, Price had his second solo at LACMA.

Frank Gehry, one of this era’s greatest architects, and a close friend of Price’s for 50 years, is responsible for the design of this compelling collaborative installation and for one of the catalog’s essays. The curves, layering, angles, and energetic forms of Gehry’s and other architects, like Zaha Hadid, are conversant with many of Price’s sculptures; except Price’s earlier pieces can be held in your hand.

In Price’s sculpture, form, color and surface predominate. He also applied color to the surface as if he were a painter. In his hands, the traditional medium of clay was elevated out of the craft category to the level of high art. Not only is contemporary sculpture redefined, this unparalleled, daring body of work inspires artists to question sculpture’s boundaries and expand the possibilities.

Price spent most of his life in Southern California. He grew up near the beach in a house his parents built in the Pacific Palisades. In the ’50s, he studied briefly under the originator of nonfunctional freely-formed ceramics, Peter Voulkos. He earned his BFA from the University of California at Berkeley, where in the early ’90s he was a professor of ceramics. Price’s artistic achievements brought him deserved success beginning with a show in 1961 at the Ferus Gallery, the epicenter of Los Angeles’ “cool.” In 1992, one of the Ferus’s founders, Walter Hopps, organized a traveling solo show for him at Houston’s Menil Collection.

In the ’60s, the object of Price’s experiments and those of his co-creators — Craig Kauffman, Robert Irwin, Larry Bell, and Billy Al Bengston — was to solve the technical problems involved in making small-scale abstract clay forms. With slick finishes suggestive of being machine-made, this group’s upbeat pieces brought to mind sleek automobiles and surfboards, two iconic symbols of Southern California; Price had been a daily surfer from age 15 through 30. These artists shared a studio and the slangy title of the “Los Angeles Look.” Along with talents like Ed Ruscha, they established this city as the second art capital after New York.

Price’s spectacular exhibit establishes the connections in his inspirations, styles, and series during his lifetime. As one body of work gave way to another in the ’60s, ’70s, ’80s, and ’90s, the shapes and surfaces continued to evolve; stylistic terms like “mounds,” “moon rocks,” and “blobs” applied to his methods of creation.

In the ’60s, whimsical “snails” and turtle “cups” predominated, some only six inches high. The surfaces of the subsequent group of “geometrics,” he covered with luminous glazes. After this series, he moved away from glazing toward more painterly surfaces, and the dark apertures of the geometrics replaced the functional openings of the cups.

Next on display are two display cabinets filled with eight to 20 examples of ceramics mimicking the style of Mexican Folk pottery called “Happy Curios,” made when he and his family lived in Taos in the 1970s; Happy is his wife’s first name. In 2003, Price, his family, and studio went back to Taos where later this illustrious artist’s career came to a close.

Price is best-known for his latest sexually suggestive organic shapes called “blobs,” with their mysterious openings or voids covered with unusual combinations of contrasting colors built up from coats of pearlescent paint. As many as 70 individual layers of brilliant colors of thin acrylic paint were fired onto clay forms. Each layer was then sanded with varied pressure to reveal the mottled, multi-colored speckled surfaces beneath. After 2010, with the help of computerized kilns, scale was no longer controlled by the size of the kiln. Up until then, Price had made his art the old-fashioned way — by hand.