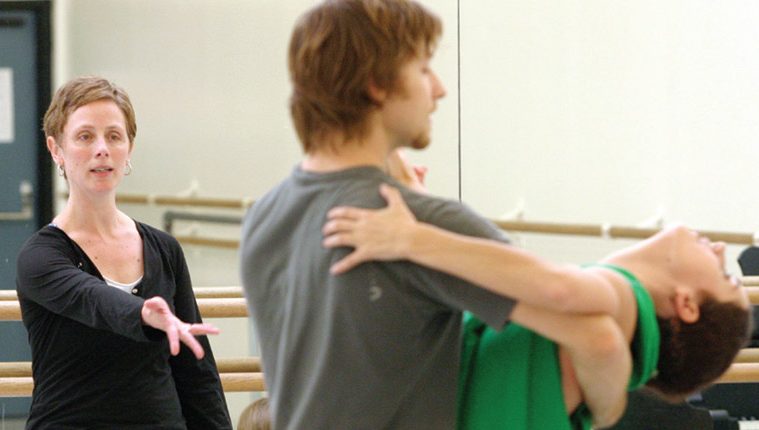 “Ballet is woman,” Balanchine famously proclaimed. Oh really? Some, women in particular, might think differently. Balanchine refers to the supreme role of the ballerina, which is indeed an exalted position in the field. Things did not work out so well when it came to positions of leadership, though.

The struggle of American women choreographers in the ballet world has been a real one. There are no artistic directors of major companies in America, although The National Ballet of Canada, The Paris Opera Ballet and The Royal Ballet all have women at the helm.

It’s a sensitive subject in a world dominated by men at the top. For reasons of power, career and tradition, women have often been considered second class citizens when it comes to ballet choreography. The fact that their dancing careers generally last longer than men may also be a factor, yet other forces are at work leading to less exposure and opportunities.

Enter Houston Ballet, opening their 2012-2013 season with a strong focus on women dance makers with Women@Art on September 20-30, featuring a world premiere by rising star Aszure Barton, the reprise of Julia Adam’s poignant Ketubah and the company’s second work by the legendary Twyla Tharp, The Brahms – Haydn Variations. It’s a strong statement by and for women in the ballet world.

This is Welch’s second evening of all women choreographers. Adam was part of the first program in 2004 and feels strongly that women should get their due. “There are very few of us in ballet,” says Adam. “The culture of the classical training never really asks a ballerina to speak up. Because there are so few males who show up to train in ballet, I think they are allowed to be who they are from the beginning.”

The problem goes back to the very heart of Balanchine’s statement and the pressure on women dancers. “The level of competition for a young female dancer is so intense that simply closing up and following the rules allows a smoother path to ultimately becoming a ballerina and being the good girl,” says Adam. “By the end of your training and your career you lack esteem and an ability to call on your own creativity. It’s very rare too that in the classical training you are asked to compose or improvise. You are asked repeatedly to imitate and perfect.”

Welch grew up with strong female ballet leaders, from his mother Marilyn Jones, who directed The Australian Ballet, and the female directors that came before and after her. “It’s been said that every company has a gender. The Australian Ballet has always been a woman,” Welch says. “I don’t know when the men took over.”

Despite the difficulties of women in the field, Houston Ballet has done its part and has a long history of supporting women dance makers dating back to 1977, when former artistic director Ben Stevenson took modern dance legend Doris Humphrey’s Water Studies into Houston Ballet’s repertoire.

The 1980s were a boon for women with Café Soir from British dance maker Gillian Lynn (Cats, The Phantom of the Opera). Then in 1986, Stevenson commissioned Suite Texas from soloist Kristine Richmond, who would go on to become a principal, a Broadway veteran, and one of Houston’s leading theater choreographers and actors.

For the inaugural season in Wortham Theater Center in 1987, the company danced Roden Mis En Vie by Baytown, Texas native Margo Sappington, who went on to great acclaim for her work with Hubbard Street Dance Chicago and The Joffrey Ballet. From the late 80s until Welch’s arrival, Houston Ballet brought works by Patricia Olade, former Paul Taylor dancer Lila York, and Natalie Weir’s first work for the company, In A Whisper.

When Welch came on board in 2003, he continued the tradition with Adam’s two works, Ketubah in 2003 and The Accidental in 2004, and another work by Weir.

Choreographers need to be nurtured, and they need programs that create opportunities. To that end, Welch has also revived the choreographic workshops where company members Melody Mennite, Kelly Myernick and Melissa Hough created new works. Hough’s work C-Sharp Minor even graced the 2011 Jubilee program, and she has recently won a fellowship grant from New York Choreographic Institute to create a new piece on her fellow company members.

Clearly, it’s a situation that is going to take a shift in thinking – new infrastructures to support leadership and creativity for women in ballet. For Welch, the best way to address the problem is with action. Welch adds, “Let’s get people talking about it by presenting strong work by women.”