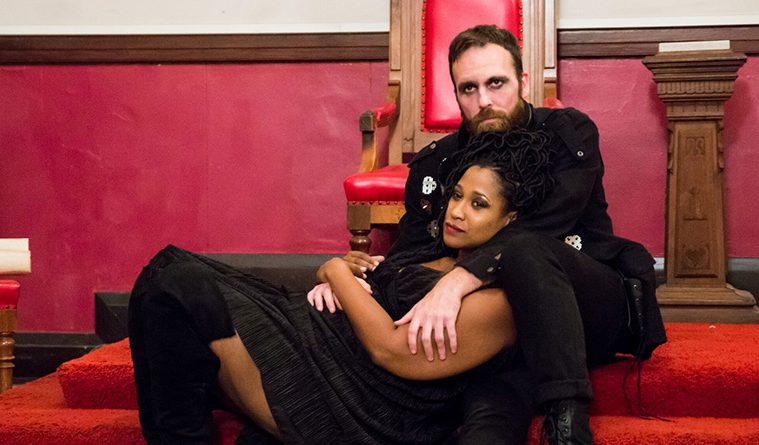 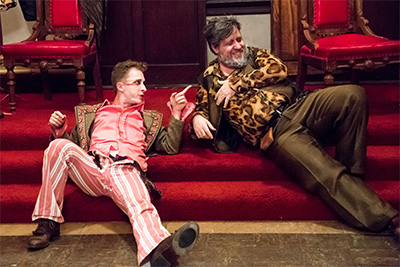 Brock England as Prince Hal and Robert Matney as Falstaff

Shakespeare, politics, glam rock: these are not terms we often put together, if ever, yet this month, Austin’s Hidden Room theater company plans to merge the three into a rocking trio for a production of the Bard’s glorious history play Henry IV, through Oct. 1 at York Rite Masonic Hall.

Shakespeare mined the theatrical possibilities of politics perhaps better than any playwright before or since. Shakespeare was also pretty hardcore rock n roll centuries before the term existed. So perhaps depicting Prince Hal’s journey from rebellious, slumming royal to the future heroic Henry V with a glitter-laced production makes true dramatic sense on stage.

What might surprise Austin theater audiences is that Hidden Room is the company glamming up Prince Hal, Falstaff and all the political intrigue of the play. With Hidden Room’s reputation for deep academic investigation into a play leading to an original practices staging, an attempt to adhere to the theatrical techniques of the time period of the work’s first performance, the award-winning company might not seem the most likely theater to do a glam-inspired staging of the play.

Hidden Room artistic director Beth Burns explains the production will still be set in Renaissance England, but with outrageous costumes from designer Aaron Flynn and live music from Todd Kassens, of Shoulders fame, to evoke the feel and tone of the glam rock era. Burns has two main reasons for this glamour staging of Henry IV.

“I thought it was something that people would want right now, to come in and have some fun and enjoy some old rock tunes and get into it,” she explained of a play she already considers one of Shakespeare’s best and most fun.

But Burns also gives good thematic reasons for the glimmering veneer of this production.

“Think about the political climate that started the glam rock rebellion, the playing against expectations, especially with social expectations of what made a man a man, the playing with gender roles, duty and honor, what it was to be an honorable person and the conflict between the more conservative and the glam people. I thought it felt absolutely right for the play. That’s something that we’ve been playing with the notion of conservative and royal versus the rebel.” 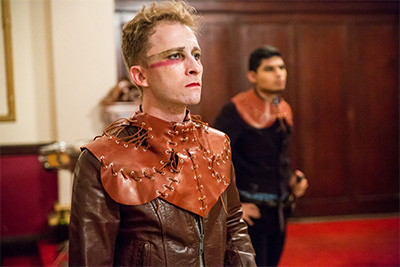 Brock England as Prince Hal and Andrew Rodriguez and Lancaster

Henry IV contains one of Shakespeare’s most complex heroic characters Henry V in his young, bratty prince years, as well as one of Shakespeare’s most roguish and “wittiest” characters, Falstaff. Yet the play’s “unsexy” title refers to Prince Hal’s father, King Henry IV, and much of the plot revolves around the political unrest that has England on the brink of civil war. Prince Hal, meanwhile has rejected his royal responsibility in order to taste the real life of the English people on the streets and in the taverns.

“He’s very young and he makes some poor decisions. He says he’s doing it because he’s trying to lower expectations so that he can come out of his shell, that everybody will think that he’s greater than he was before. But that also seems like an excuse to ignore his responsibilities and instead to play, drink and hang out at bawdy houses and steal and generally be a juvenile delinquent. It really is a call for maturity.”

Even Shakespeare lovers might be more familiar with the war story of Henry V, and perhaps think of Henry IV as that history play with too many plots and players to keep track. Burns argues that Shakespeare created an almost perfect play in Henry IV, especially Part I, from which this production will primarily draws, as it balances comedy, a character driven plot and themes that will surely strike audiences as strikingly relevant 400 years after its creation.

“It’s a wildly political play. Henry IV is very much about what happens when a country is divided against itself, when you vilify your countrymen as enemies, and you forget that when you divide a country, it dies. There’s all this symbolism throughout about a body, the body in this case being England, being ripped apart and when that happens you just can’t survive.”

“In the play, both sides are striving towards unification, trying to find a way towards peace, but neither one is willing to calm down and let the other one have a voice in order to humanize each other.”

“First of all, we have strict attention to academic details,” Burns says of the cast and creative crew’s preparation when tackling the play. “We have some of the finest Shakespeare scholars in the world assisting us with dramaturgy on this. The other thing we’re doing that’s typical for Hidden Room is we really keep attention to our verse and prose handling. We have been trained by actors who’ve worked at the Globe and RSC in terms of our language handling and I’m extremely proud of it.”

From that deep dramaturgical dive into the play come some startling insights into perhaps hidden lessons Shakespeare wove into the language and themes of the play, messages just as significant to 2017 as to 1597.

“It seems like what he’s getting at, and I never thought I’d see this from Shakespeare, is that hard work and taking care of yourself, being respectful of your own body and other people, working together as a team, is not only what makes a country work but what the world wants from you. It’s about keeping the cosmos in line,” describes Burns of the final meaning she finds in the play.

“What is it that makes the world work properly seems to be hard work, taking care of yourself and your country. And that I think is a really good lesson for today.”

But in a Hidden Room this is a lesson best told with more than a touch of makeup, a rain of glitter and an electric beat.