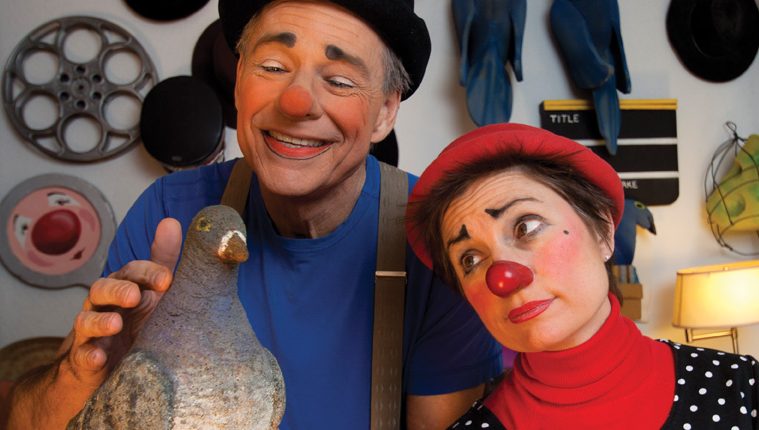 After years of devoting their lives to the art form known as clown, medical Dick Monday and Tiffany Riley still cringe but politely smile when they’re asked “what do you do for a living, though?” ? as if they must be stuck in a 9-to-5 claims adjuster position in order to support their addiction to red noses and gag props. And while it’s true that many actors and performers, especially in these parts, need to have a “day job” for survival, these two ? also known as Slappy and Monday, and married for two decades ? have been able to carve a living out from clowning around, and teaching it. (There may have been the occasional gig selling slicers and dicers at fairs early on.)

“[People] don’t see it as being something you could actually fill your entire life, dreams, careers, work ethic with,” Monday says.

Granted, much of their career was spent living in cities where clown is more accepted as a serious art form, something for adults; more from the European tradition as opposed to the rainbow-haired, birthday-party type we think of here. From L.A. to Las Vegas in New York, their collective résumés include gigs with the Big Apple Circle, Ringling Bros. and Barnum and Bailey (Monday was the director of their famed Clown College for three years before it closed in 1997), the Groundlings in L.A., “The Muppet Show” and countless international festivals. Their friends include world-famous clowns, such as Avner the Eccentric.

After leaving Las Vegas for New York in the late ’90s, they formed a group of clown artists and became known as NY Goofs, performing sold-out late-night shows on the weekends, as well as getting steady work in gigs like Big Apple Circus.

“The whole concept behind the Goofs was getting together working professional variety entertainers and giving them a chance to try new material and have a support group,” says Monday, a Nebraska native who auditioned for Ringling Clown College on a dare while at the University of Maryland in the 1970s.

“Once people are paying you for shows it’s difficult to develop shows, because they’re paying you to do what you do and not develop new shows. In the course we formed an ensemble of clowns that was really powerful and supportive, and did a lot of festivals and corporate gigs.”

“And we still do,” adds Riley. “We can meet up with any two or three of them anywhere in the world, have a half a day with them and have a show ready, because of our vocabulary with them.”

After 9/11, though, it was hard for any performer to make a living in the Big Apple, so because Riley is from Irving and has lots of family here, they moved to North Texas with their two children. They eventually opened Slappy’s Playhouse in the Galleria, which had a six-year run. They also started performing with the locally based Lone Star Circus, and created an outreach program at Children’s Medical Center called Funnyatrics, in which a staff of clowns visits sick children five days a week, two times a day, offering much needed smiles and courage in the face of needles and unpleasant procedures.

The adult clown shows in New York ? which they refer to as variety acts ? had titles like “Water for Clowns” (a parody of “Water for Elephants”) and “Hotel Bananas.” Now, they’re doing something similar here with a show called “Hellzapoppin’,” which is produced under the banner of Level Ground Arts and opens that group’s fourth season. The performances will be at Arlington’s Creative Arts Theatre & School in late February. It takes the concept of the 1930s variety revue on Broadway (there was a film version in the ‘40s), by the comedy team of Olsen and Johnson, but puts their own spin on the variety acts. They’ll be using some of their friends from the local clown community (yes, there is one) and some of the performers who frequent their periodic “clown work-outs,” in which improv games and physical movement help keep the mind and body sharp.

“I’ve always tried to make a living at this, and I’ve been lucky,” Monday says. And if they can keep doing it in North Texas, which is very much the goal, then everyone will be happy.