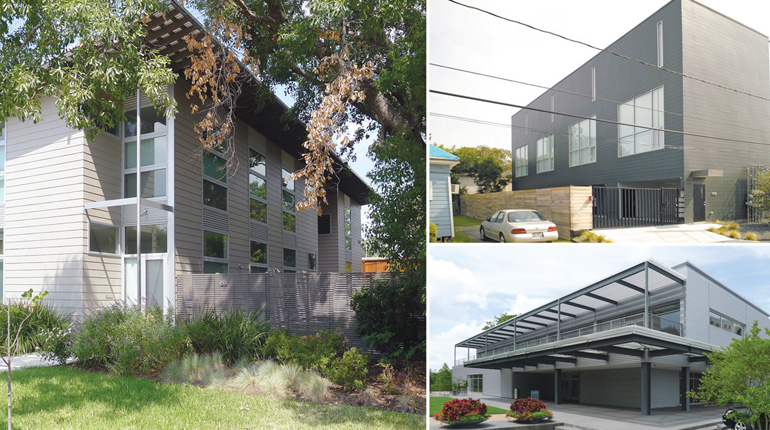 About ten years ago I was intrigued by the construction of what was then Evelyn Gorman’s avant-garde boutique, physician Mix Modern Clothes, which was on Colquitt Street across the way from where I worked at Val Glitsch Architect.  (It is currently the home of Laura Rathe Fine Art.)  Since I had moved to Houston in the late 1990s to study architecture at Rice, the new buildings I had seen looked to be mostly uninspired, as if determined to prove Philip Johnson right when he complained, “Must we discuss architecture in Houston? It’s so dull.”

What passed for a modern building here was generally some sort of hulking Bauhaus-like collage of stucco-covered volumes (mostly white, but sometimes painted in bright tropical colors) spiced up with appliques of stone veneer, dark stained wood paneling, concrete block or brick, and occasionally some cast-in-place concrete.  However, this building, designed by Albert Marichal, seemed different.  What fascinated me was its geometric purity, thoughtful relationship to the street, and its deployment of cheap-looking materials (like cement board panels, windows made of plate glass and dimensional lumber, and exposed pipe columns) in a witty and tectonic manner.

It took up many of the strategies used by Renzo Piano in the design for the Menil Collection (1987), Houston’s most significant modern building of the last 30 years. While Marichal’s building is not without its flaws, the main one being its awkward scale, it was so much more interesting than anything I had seen that was built in Houston since I arrived. I had hoped it was the harbinger of perhaps a new, local “school” of architectural design in a way that the original “Tin Houses” of the mid 1970s through the 1990s had been.  (These buildings, which were characterized by simple rectangular plans, gable or shed roofs, and cladding of corrugated galvanized iron panels, took their inspiration from sturdy, but cheaply-built metal warehouses and commercial buildings erected in Houston’s old suburbs from the turn of the century up to the present.)

Ten years later, the June opening of Brave Architecture’s new Sicardi Gallery building on West Alabama – located across the street from the Menil parking lot – stands as the latest exemplar of what could indeed be described as a locally inflected architectural practice, however marginal it may be. While some examples of what I’ve come to call the “Gray Boxes” mode of design are more cautionary tales than success stories, suggesting that the trend risks becoming another undigested style if applied indiscriminately, at its best, the new style follows the Menil building’s lead in revealing the place-making qualities that architects can achieve when they trade ego for modesty and pay attention to such things as context and climate.

These days, the Menil building’s sensitive integration with the surrounding neighborhood – despite being a block long, 165 feet deep and three-and-a-half stories wide, as critic Reyner Banham noted in Art in America when it opened – is nearly universally admired for reasons Banham pointed out. Above all, Banham praised Piano for balancing “resolute bloody-mindedness” – exemplified by “a skinny but highly visible and purposeful steel frame with emphatic verticals picked out conspicuously in white paint” – with the “surreptitious tact” of a “boarded exterior painted the same gray as the neighborhood houses.”

But when the designs for the Menil Collection were first publicly presented in 1982, architectural historian Stephen Fox wrote in Cite magazine that, “…among those who attended the architect’s presentation at Rice, there seemed to be a slight feeling of disappointment that the design was so modest, as if in Houston this attribute was not contextually appropriate.”  This sentiment seems frustratingly common among Houston architects, in that every building they design, should be some sort of monument leading to a plethora of buildings exhibiting what Fox described as “that sense of scalelessness—semi-big, bland, and impersonal, which is so characteristic of many modern American buildings.”

Twenty years later, Marichal’s building suggested Piano’s influence was taking hold, however belatedly. To be sure, it too was hulking, but with its insistent monochrome battleship gray coloring, oddly delicate cantilever over a handful of covered parking spaces, and gravel-paved forecourt shaded by giant live oaks, it fit rather comfortably with the other art galleries and houses on the street.  Happily, the next ten years brought a steady trickle of small modern buildings that appeared to be formally related.

In 2003, the Matuszczak House, designed by Wittenberg Partnership was completed several blocks further west on Colquitt Street.  This house featured similarly legible geometric forms, but instead of cement panels it was clad with extra-wide corrugated metal panels.  These panels differed from those of the Tin Houses in that the corrugations had a larger, trapezoidal profile instead of being wavy and were installed horizontally instead of vertically.)  A one-and-a-half-story wing projects from the front of the house, which is at the scale of the 1930s bungalows that used to line the street.  A taller, three-story wing articulated by boxed-in balconies is set behind it.

The Perez House (2004), designed by William Price on Eberhard Street was a rectangular prism clad in the same kind of panels set on a darker recessed base so that it seemed to hover lightly above the street.  Artistically asymmetrical cut-outs in the panels provide opening for windows and a recessed balcony.  At the top floor, they neatly frame a view of the downtown skyline from a walled roof deck.  The 48’ House (2006), designed by Mark Wamble and Dawn Finley of Interloop Architecture as their residence and architectural office, was named for its width.  Another perfect rectangle, this time with a void on the ground floor for a carport, was set as far back as possible on its lot, which backed up to the Southwest Freeway to block traffic noise and thereby allow the front yard to be a more pleasant outdoor space.

The Helfenstein-Sauter House, designed by Nonya Grenader, FAIA (2009), was built for Menil director Josef Helfenstein on Sul Ross, some 200 yards from the museum.  Instead of metal panels, this long and narrow rectangular, two story building was clad with cementitious clapboard siding and painted the same color as the gray siding of the Menil Collection.  Unlike the other buildings, it had a shed roof, perhaps in response to the neighboring pitched roof bungalows.  The crisply articulated trim and window frames of the house seemed to echo in spirit “the purposeful steel frame” of the museum building.  (Grenader also designed a Tin House for Jim Love as late as 2004, a reminder that many of the recent Gray Boxes owe as much to that style as to the Menil’s influence.)

Also in 2009, architect Ronnie Self completed what he calls the Saint Emanuel House, named after its Saint Emanuel Street location in the Third Ward.  This house, where Self lives with his partner, Bernard Bonnet, is like the 48’ House, literally perched on the edge of a freeway.  However, unlike the Southwest Freeway, which passes through a genteel neighborhood and has tall, heavily landscaped concrete sound walls erected along its length, the South Freeway passes through an economically depressed neighborhood and has no such visual and acoustic barriers.  Self used this to his advantage and by propping the house on concrete pilotis, he achieved stunning views of downtown over the freeway chasm in an inspired design move.

Also completed in 2009 was the E. Rudge Allen Jr. Family Education Annex, designed by Jackson & Ryan on Binz Street across from the Children’s Museum of Houston.  This building is a long narrow, flat roofed rectangle clad with horizontal corrugated metal siding in two shades of gray.  It derives its principal architectural decoration from the three-dimensional, multi-colored letters that spell out the name of the building and its address in a continuous frieze just below the first floor windows.  Its semi-industrial look refers to the original museum, which was made out of two pre-engineered metal buildings.  The annex suggested that the trend was no longer confined to houses and small commercial buildings, but was now “officially” sanctioned by at least one of Houston’s cultural institutions as appropriate for one of its public buildings.

The next year, the Lora Jean Kilroy Visitor and Education Center, designed by Leslie K. Elkins Architecture with landscaping by McDugald-Steele, was completed.  It serves as the public entrance to Bayou Bend, a pink-tinted stucco mansion designed by John Staub in 1928 for the philanthropist and civic leader, Ima Hogg that is now the Museum of Fine Arts: Houston’s American decorative arts wing.  The visitor’s center is a two-story rectangular, metal clad building, articulated with heavy-looking horizontal sunshades supported by steel I-beams.  Why the new building so emphatically contrasts with Bayou Bend, I am not sure.  While the previous buildings I described respond to their site or to neighboring buildings in an inventive way, this building seems to do neither.

Another building that I found problematic for the same reasons was the four-unit townhouse designed by Charles Toomey of Studio 333 on Cleveland Street in the Fourth Ward, directly across the street from the recently rehabilitated African American Library at the Gregory School.  This building is a three-story rectangle clad in a horizontal cementitious panel rain screen painted a uniform, charcoal gray.  It has the uninteresting enigmatic presence of one of the monoliths from 2001: A Space Odyssey, that suddenly dropped into the old Freedman’s Town.

On either side of it, sits two-story, gable-roofed row houses for which the developer had made the effort to install an alley, so the garages would not have to face the street.  But not only does the Cleveland Street townhouse not respect the massing and form of the surrounding buildings, it also fails to take advantage of the alley, which it actually interrupts to make a positive street presence.

The new Sicardi Gallery brings the trend to the present moment. From the street, it appears to be a two-story corrugated metal clad volume set on top of a one-story white-stucco ground floor.  In reality, it is a two-story building with a very tall first floor that extends into the metal clad section with a lower-ceilinged second floor above.  A large, glazed cut-out in the main volume lights the main stair.

This building, like several of the others, has an ambiguous scale because of the odd sizes and locations of its openings.  However, its compositional elegance and the lofty generosity of its interior spaces more than make up for this defect.  In addition, I look forward to a lively dialogue between it and the neighboring building that architect Dillon Kyle plans to build on the vacant lot next door.

The Sicardi building is the latest sign that, on the whole, the Gray Boxes design mode produces meaningful modern buildings that respond to the physical and cultural environment of this city.  Instead of big, generic Bauhaus boxes, these self-effacing, gray buildings quietly assume their places and provide an intriguing example of a contextually and environmentally responsive architecture for Houston.