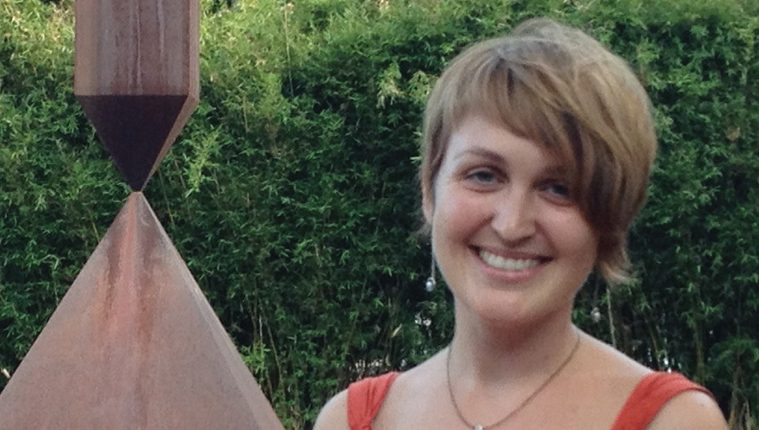 Growing up in a country store and volunteer fire department in rural Virginia might seem like an unlikely start for a career trajectory that has taken Ashley Clemmer Hoffmann to two of Houston’s most admired art institutions, Project Row Houses and the Rothko Chapel.

But Clemmer Hoffmann, who was recently named the chapel’s community engagement director, now credits those two childhood gathering spots – both founded by family members – with heavily informing her desire to work within various communities. That interest led her, after earning a bachelors degree in visual art at Roanoke College, to teach art in Community Art Corps, an AmericaCorps program developed by the Maryland Institute College of Art in Baltimore, where she went on to earn a masters degree in community art.

“It was through my experiences in Baltimore that I was introduced to, and ultimately fell in love with community-based art,” says Clemmer Hoffman, who also cites her work teaching art in a community center and as assistant director of education at The Creative Alliance, a multipurpose arts center, as formative influences.

“They brought together community and art, two things that resonate deeply for me. It is hard for me to imagine one without the other.”

The former public art manager for Project Row Houses, which she joined in December 2006 after graduating from MICA, is equally affectionate towards the Houston arts community, specifically its entrepreneurial spirit and the ways in which artists and organizations openly collaborate.

“There is something about the southern hospitality of Houston that provides an environment where artists and organizations make themselves easily accessible. After a while, it begins to feel like a small town, which I appreciate.”

During her time at PRH, Clemmer Hoffman developed and managed numerous community-based art programs including: the bi-annual “Rounds”, the Summer Studio Program, the PRH/Core Residency, and others. She also oversaw marketing and communication for the organization as a whole. Over the years, she kept note of the important lessons she was learning, such as sensitivity, balance, the process of collaboration, and the importance of timing.

Through her administrative roles in programmatic partnerships such as Communograph, an artist-based mapping project conceptualized by Los Angeles artist Ashley Hunt, and supported in part by the Visual Artist Network and the University of Houston’s Cynthia Woods Mitchell Center for the Arts – as well as her participation in initiatives such as The Idea Fund and NAMAC’s Leadership Institute for Visual Arts Organizations, Clemmer Hoffman has challenged herself to balance the needs of an organization with those of the artists with whom she works. With this guidance of key people she met at PRH – including founder Rick Lowe, executive director Linda Shearer, and Art League Houston executive director Michael Peranteau, a fellow PRH alum – she has cultivated the sensitivities necessary for an outsider working within a specific community.

When Rothko Chapel executive director Emilee Whitehurst reached out to her, Clemmer Hoffman recognized the chance to play a vital role in further developing the significance of the chapel in Houston and around the world.

“The Rothko Chapel, like PRH, is an extraordinary example of how multiple elements (architecture, art, etc.) can be merged to create a place that can spark social change,” she says. “Both places rely heavily on being activated by people.”

Continuing to build on its 40 year history, she describes Rothko Chapel as a growing, independent organization. (Although the chapel was founded by John and Dominique de Menil, it is a separate entity from the Menil Collection with its own board, funding and staff.) It develops programs in partnerships with approximately 40 local and national cultural, arts, religious, and social justice non-profit organizations, advancing the Chapel’s mission and integrating the focus of art, spirituality, and human rights.

The official mission of Rothko Chapel is “to inspire people to action through art and contemplation, to nurture reverence for the highest aspirations of humanity, and to provide a forum to explore matters of worldwide concern.” Clemmer Hoffman explains that, as an institution, the Chapel functions as an art space, a sacred space, and a forum for global concerns. It has two vocations, which are contemplation and action.

A good match, if you ask me.

As community engagement director, she takes the mission personally, developing the first ever Rothko Chapel Guild, intended for those who are dedicated to help provide hospitality to chapel visitors and protection for the Mark Rothko paintings. Clemmer Hoffman plans to recruit and interview potential members in July, launch the program in August, and have a group of dedicated volunteers trained and ready for the 2012 Fall program series.

Rothko Chapel contributes heavily to Clemmer Hoffman’s view of Houston as “culturally rich,” with its ongoing free public events plus the Chapel’s public accessibility 365 days of the year (10am to 6pm). Each year, more than 70,000 visitors from around the world visit and approximately 5,500 participate in the Chapel’s programming.

This month, Rothko Chapel offers two performances to watch out for. On July 12, African percussion ensemble D.R.U.M. (Divine Rhythm, United Motion) presents African and African-diaspora music led by the award-winning Baba Ifalade (Alafia Gaidi). And on July 28, in conjunction with The Menil Collection’s exhibition Silence, sound artists Steve Roden and Stephen Vitiello present The Spaces Contained in Each, a collaborative improvised sound performance that uses silence – recorded pauses and silences on published recordings as well as field recordings made by both artists. Additionally, installation artist, composer, and performer Jacob Kirkegaard presents his new piece A CAPELLA, created live inside and in collaboration with the Rothko Chapel itself.

The Sufi mystic Rumi once wrote, “Let the beauty of what we love be what we do.” Seems that Clemmer Hoffman is right on track.

As If They Were Not There: Sound Art in the Rothko Chapel
in collaboration with The Menil Collection
2 p.m. July 28
Free