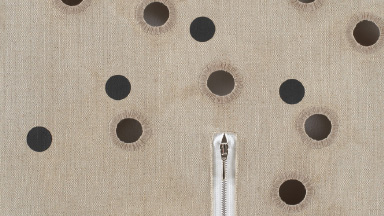 If you’re an artist who makes work titled “Gays in the Military” or “Mr. Gay in the U.S.A,” people might make a few assumptions about you. They might refer to political or gay art. They might not assume you came of age in Texas in the 1970s or that your work features holes, zippers, posters, trees, tunnels and images of federal buildings, with equally meticulous attention and texture devoted to each.

Clearly there’s much to learn from “Donald Moffett: The Extravagant Vein,” which is the first major retrospective of two decades of Moffett’s engaging mixed media works and which runs from October 1, 2011 through January 8, 2012 at the Contemporary Arts Museum Houston.

Moffett came of age as an artist in New York in the fierce heady days of late 1990s and early 1990s sexual politics, when activist organizations like Gay Men’s Health Crisis and ACT UP (AIDS Coalition to Unleash Power) were taking their message to the streets. Artists were central to these efforts, and Moffett was himself a founding member of Gran Fury, often described as the artistic wing of ACT UP.

Referring to “the heady days of the early 90s” Moffett recalls that “there was a good deal of punishment for the kind of work I was doing, a gruesome critical response at times.” Of course, times change, “It is not like that now, hasn’t been for years,” he said. “It was a time when art and street politics and catastrophe were all mixed up. I’m in no way nostalgic towards those days. They were just too much. You can’t be at war your whole life.”

Certainly, sex and sexual politics have long been of interest to this artist. “Gays in the Military” exploits Moffett’s talents in graphic arts to wittily engage with the military’s exclusion of gays from service by repurposing images from Civil War military texts. Sometimes humorous, Moffett’s work is also somber and meditative, as in his drawings “Mr. Gay in the U.S.A,” which records the trial of Ronald Edward Gay, whose rage at the use of his surname to refer to homosexuals motivated a shooting spree at a gay bar in Roanoke, VA killing one man and wounding six others.

Moffett’s sensibility was partly forged in the streets of New York, but it is also a product of the state of Texas. “I was born and raised and educated in Texas, all the way through. I graduated in 1977 from Trinity University in San Antonio. It was an unusual education in art, unusual because choosing studio art practice in Texas in those years — well, it was what it was. It was far from the mainstream. I moved up to New York and saw there was a long way to go.”

Still, Texas informs his aesthetic especially in very recent work, “I am reminded, refreshed and renewed by an aesthetic I grew up with. There was a big rural component to my upbringing. The utilitarian component that was endlessly recorded by ranchers and farmers — we’re now trying to resuscitate some of that beauty with wire and concrete and chain link.”

This focus on materials seems especially apparent in a series of works gathered under the title “Lot,” which Moffett has been making since 1995. The canvases are simple, often monochromatic yet often textured with features like holes, embroidery and zippers. The holes and zippers seem so suggestive, being everyday objects that nonetheless draw viewers into a world of fantasy, revelation and eroticism. “Lot” offers an interesting test.

Other works by Moffett feel more directly political. What about “Lot?” And would we call it “gay” or at least concerned with sexuality? Moffett responded with statements about his larger artistic practice. “I don’t make political art,” he said, “but I have absolutely opened up the whole part of my brain that is political so at any time it can be brought right into my practice. It’s not something that I would ever isolate or segregate or eliminate not only from my practice but from my world. I think it’s a very false line to say that some artist is political and some artist isn’t. It’s not alien to art and not even a subcategory of art. In my case it is art.”

As for the question of gay art, Moffett is equally resistant to simple answers. “I’d not want to limit what I do to that,” he said, “although I have private driving views, desires, ambitions which are linked. But that’s to wall off more things for myself than ‘gay art’ has ever allowed me.” Moffett resists proclamation, which perhaps explains why his oddly moving “Untitled (The Public)” features a video projection of Barbara Jordan speaking at the 1974 Watergate hearings. What do we see when in “The Public?” An image of people listening.

— JOSEPH CAMPANA
Joseph Campana is a poet, scholar, and professor of literature at Rice University.