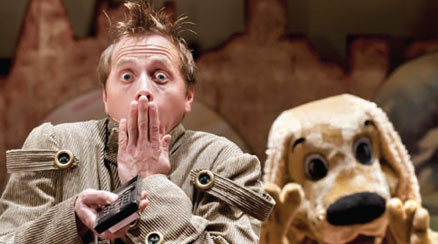 There’s a bounty of holiday art activity every year, from the mainstays like A Christmas Carol and The Santaland Diaries at the Alley Theatre to Houston Ballet’s ever-popular Ben Stevenson production of The Nutcracker, this year with principal Amy Fote giving her last performance on a Houston Ballet stage.

I look forward to requesting my tickets at Stages Repertory Theatre’s annual Panto show. “Two in the screaming section, please.”  It’s quite normal to hiss at the villain, warn the good guys, and just basically cause a ruckus during a Panto show. This year, Kenn McLaughlin (book and Lyrics) and David Nehls (music) Panto-ize Mother Goose.

“It is straight-up old-fashioned nursery rhymes with true love at stake and one nasty, nasty villain in the mix,” says McLaughlin, Stages artistic director.  “Ryan Schabach, as Buttons, is playing a very harried wedding planner who has to plan the royal wedding reception for Old King Cole and Mother Goose. Of course, even with as much audience help as he can muster, mayhem ensues. And Ryan is doing double duty here in that he’s also directing this one.”

You will find beautiful voices, including Grammy Award-winning vocalist Cynthia Clawson, in a gorgeous historic place at Houston Chamber Choir’s holiday concert. “Our Christmas at the Villa concerts have become a Houston holiday tradition,” says executive director Becky Tobin. “The Villa de Matel is an oasis in the middle of Southeast Houston and one of the city’s architectural gems. The Chapel, built in 1928, is modeled after old Northern Italian basilicas, and when paired with the angelic voices of the Houston Chamber Choir, produces a radiant musical experience.”

Mercury takes a break from Messiah with a new program of rare holiday gems. “There is a lot of other beautiful and interesting Christmas music composed in the baroque era, and we felt it was time to present something other than Handel’s Messiah this Christmas,” says Antoine Plante, Mercury’s artistic director. “We will perform rarely-heard French Baroque carols by Michel Corrette, the famous Christmas Concerto by Arcangelo Corelli and the recently rediscovered Gloria by Handel with wonderful soprano, Lauren Snouffer.”

If there’s ever a time to get nostalgic it’s the holidays. Why do you think we are still watching James Stewart in It’s a Wonderful Life? A.D. Players offers Sanders Family Christmas, set in 1941 at a Christmas Eve service just before the men are shipped off to World War II. Christmas carols and hilarious yuletide stories fill the evening with Christmas cheer in this richly entertaining family musical. “The members of the Sanders family are each real and alive, and the music they play gets in your soul. Audiences will laugh, celebrate the season, and for that time in the theater, become part of the big extended Sanders family,” says Jeannette Clift George, A. D. Players artistic director. “The Christmas season is a celebration of the joy of Christ and his love for families. In that joy we present a favorite programming of the Sanders Family Christmas, and in its joy, I welcome everyone to celebrate.”