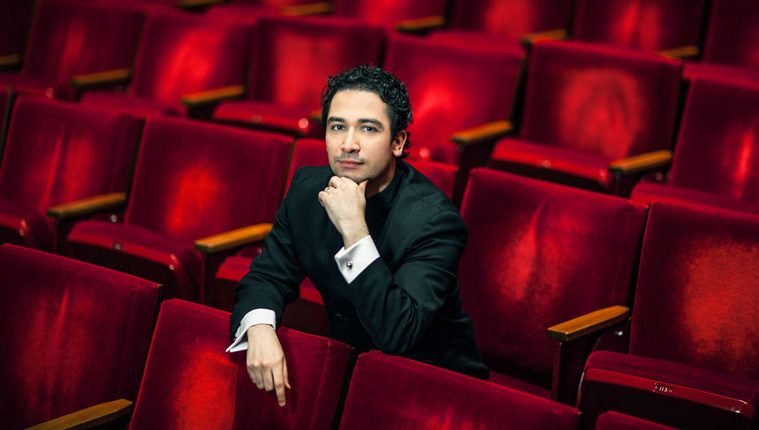 Honeymoons on The Bayou

It’s finally official: After a three year search and on the eve of its Centennial Season, the Houston Symphony has named 35-year old conductor Andrés Orozco-Estrada as its next Music Director.

Born in Columbia and trained in Vienna, Orozoco-Estrada hasn’t yet conducted most of the world’s top orchestras, and although he has jumped in at the last minute on two occasions with the Vienna Philharmonic. Perhaps the single most telling endorsement on his burgeoning résumé is that he has been invited to conduct one of only 10 or so subscription concerts for that most storied of ensembles in Vienna during 2015-2016 season.

Virtually unknown in America, the buzz from the few who have worked with him is that he is the real deal and that he is a man whose star is truly on the rise. His charm and his inviting and open disposition are also intoxicating. It was clear from the excitement in the room when his appointment was announced that the Houston Symphony musicians agreed that there couldn’t be a better person to lead their orchestra into its second century.

With all of this in mind, I set out on a quest to discover what it is that makes a great conductor. If you ask a member of an orchestra like the London Symphony, and I have, they will tell you that it doesn’t really matter who is on the podium, as long as the musicians stick together. There have also been memorable incidents in which a conductor made matters worse rather than better, as in the debut concert from Houston’s OrchestraX back in the late 90’s in which by all accounts the conductor single-handedly caused a minor catastrophe and had to ask the orchestra to start over. So: what is it that conductors actually do? What is their relationship to the people they stand in front of night after night?

To answer the most basic questions, the conductor does move his arms in the air and, yes, there is a pattern to that movement that fundamentally reflects the rhythm and meter of a piece, but that skill is simply the tip of the iceberg and, in fact, some of the greatest conductors are known for having poor baton technique.

Others are known for conducting as much with their eyebrows, and sheer force of personality, as they are with the stick in their hand. And still others are like a fantasy lover: They have it all. They have technique, personality, artistic integrity and the ability to inspire not only the musicians in front of them, but the audience behind them and, most importantly, they have the mysterious ability to create a sense of occasion when they are on stage.

“A conductor is like a head football coach,” says Adam Dinitz, Solo English Hornist of the Houston Symphony. “Some teams respond to a mean coach who pushes them really hard and others do not. The orchestra, and our new maestro have a very similar approach to how he goes about getting what he wants out of the orchestra, and that is why we have such a great chemistry together.”

In talking with a small handful of musicians from the Houston Symphony, there was one theme that echoed throughout each of our conversations. They don’t like being micro-managed. It is clear that for them what makes the biggest difference from the podium is inspired leadership coupled with unrelenting artistic integrity, not excessively controlled management.

Alecia Lawyer of the River Oaks Chamber Orchestra (ROCO) prefers conductors to be more like facilitators of artistic ideas —which are already abundant in the orchestra, thanks largely to her talented roster of musicians, many of whom have deep roots in playing chamber music in much smaller ensembles.

“We’re seeking partnerships and not dictatorships,” says Lawyer. As the Executive Director of ROCO, Lawyer serves a curatorial role in selecting the annual roster of conductors for the orchestra, which, unlike the Houston Symphony, does not have a Music Director. She is also quick to point out that she would never hire someone with whom she wouldn’t want to share a glass of wine.

“After all, finding a conductor is a bit like dating,” says Adam Dinitz. And just as a couple develops a relationship over time, so does a conductor and the orchestra that he or she leads, but whether it’s for one concert, in the case of ROCO, or for the next five years of concerts, as with the Houston Symphony, trust is the key to a successful relationship.

“The musicians have to know you as someone who is willing to be known and who speaks the same musical language as them,” says Patrick Summers who holds a rather unique position as both Artistic and Music Director of the Houston Grand Opera. He has also conducted the HGO Orchestra since its inception, developing it from a part-time assortment of free-lancers to a cohesive ensemble capable of stirring performances of everything from Wagner’s Ring operas, which the company will perform starting next season or, Donizetti’s L’élisir d’amore. “L’ élisir is so seemingly simple that to keep it alive and maintain its expressiveness is more difficult than Wagner,” adds Summers.

Houstonians are fortunate to live in a city where, thanks to several world-class organizations, there is a parade of talented conductors to experience. As Houston Grand Opera launches its first-ever Ring, Summers continues to lead his ensemble to new artistic heights, and as the Houston Symphony launches its Centennial Season, there is the promise of fresh inspiration under the leadership of Adrés Orozco-Estrada. One hopes that the audience’s love affair with him will last far beyond the proverbial honeymoon.

-CHRIS JOHNSON
Chris Johnson is a radio host and producer, a violinist and a 2008 fellow of the NEA Institute for Arts Journalism in Classical Music and Opera.