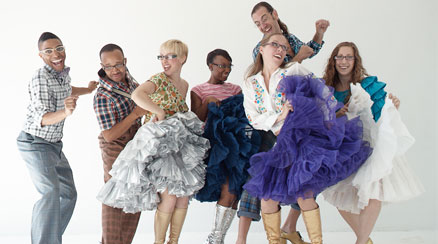 No, The Stoners and The Metronics are not emerging indie-rock bands.

These handles are how Hope Stone and Houston Metropolitan Dance Company members have been referring to themselves as they merge for their joint performance, squared dancer, November 9 and 10 in the Wortham’s Cullen Theatre.

An alliance built on mutual admiration and like-mindedness, Hope Stone helmswoman, Jane Weiner and Houston Met’s freshman artistic director, Marlana Walsh Doyle agree the pairing is one that has been simmering for some time.
Earlier this year, as the weather was heating up, so were the possibilities for partnership. Fresh off her August who’s-who of Houston artists, WRECK-WE-UMM, Weiner says her band of “permanent pick-up dancers,” was on a collaborative high.
“It didn’t feel competitive but it felt edgy,” Weiner recalls of that summer experience. “Everybody was pushing each other but everybody was on the same page and very ensemble-like.”

So, when Doyle, who performed in WRECK-WE-UMM with a few of her Houston Met compatriots, suggested the two companies do a concert together and seize the opportunity to devise an entirely blended, new work, Hope Stone was keen.

The resulting piece, also titled squared dancer, is a play on the equally populated, 12-member companies and explores a thematic arc that contrasts boxed-in structure with unleashed freedom.
Weiner is using square dance, that movement staple of American physical education, as a loose starting point. She hints that we’re unlikely to see more than an inkling of do-si-do, though she’s content to cross that junction visually with a wardrobe of petticoats and gingham.

A lover of double entendre, Weiner is also circling ideas regarding the social reflexes of the unhip, which we usually refer to as “square.” She notes that most dancers, individuals that live a seemingly free, yet relentlessly structured lifestyle, are pretty square. The 24-strong, combined company may begin that way but the destination is what Weiner describes as full-throttle, or “deep bone” dancing.

Joining forces wasn’t Doyle’s only proviso for squared dancer, though.

“I told Jane I wanted live music because we [Houston Met] had never worked with live musicians.”

It was another easy sell for Weiner, who was once told by her Village of Waltz collaborator, Peter Jones that she’d never go back to recorded music after using live musicians. “There’s a financial element, that we have had to use canned music,” she concurs, “but I look for any possibility to look for live music because it just sharpens the whole piece.”

With squared dancer, Weiner is fulfilling a dream to choreograph to the versatile sounds of the electric violin. Google came through for her when it unearthed composer and violinist Marc Hennessey, who employs the name To All My Dear Friends as a marquee for his musical projects.

In addition to the artistic appeal, Doyle says her request for live music was driven by the desire to take notes from Weiner on the process of collaborating with live musicians, from negotiating a contract to working with the artist. “She’s creating the work but she’s mentoring me on that element,” Doyle adds.

While purposefully stepping outside her own box, Doyle is pushing her company into new territory as well. Though a diverse repertory is part of Houston Metropolitan’s mission, the dancers are used to either learning from a choreographer or reconstructing past work.

“This 4-week experience working with another company is a whole new experience,” explains Doyle. “Usually a choreographer has one week with us so they have an idea of what they want and they just kind of throw it at us.”

In contrast, during the creation of squared dancer Weiner will have built movement phrases and messed with them, changed things and remixed the sequence, and encouraged dancers to “make it their own thing.”

Though it gets premiere billing, squared dancer is not the only world-premier on the shared Hope Stone/Houston Met program.
Choreographer and Sam Houston State University faculty member, Erin Reck, will debut There Are Things We Don’t Know We Share, a work for 8 Houston Met dancers.

In touch over the last few years with Doyle about creating work for the Met, Reck used writing and improvisation to create a vocabulary personal to each dancer. Set downstage, close to the audience on the apron, the piece explores the role of individual perspective in reactions to death and loss.

In addition to Reck’s premiere, the Met will reprise two works they debuted in their biannual show last June: This Expression of Surprise, a contribution of 3rd year Julliard trainee and emerging choreographer, Robbie Moore who is a graduate of Houston’s High School for the Performing and Visual Arts, and Suzi Taylor’s To Escape the Weight of Darkness, a pretty piece that shows off the technicality of Houston Met’s dancers.

Hope Stone will open the program with Weiner’s Change Is Inevitable. A work that has gone through a few permutations before finding its place in Weiner’s own company repertoire, the piece finds her dancers pushing approximately $500 worth of pennies around the stage.

The work features yodeling within its musical landscape and, keeping with her confines-to-free motif, closes with the Philip Glass’ composition Mad Rush, an ebbing swell of music which alone, Weiner says, makes her want to weep.

“The piece goes to complete, absolute abandon at the end,” gushes Weiner. “Watching the trust between this group of dancers has brought it to another level.”

squared dancer is your opportunity to witness two of Houston’s finest dance companies share the boards and, as Doyle capsulizes, watch each “grow as they go” beyond their respective box.

-NICHELLE STRZEPEK
Nichelle Strzepek prefers Scottish Céilidh to American square dancing but would settle for either when invited to a barn dance. She is the founder and editor of DanceAdvantage.net, a popular blog for dance students, teachers, and parents, and frequently covers dance performance in Houston and beyond.