Houston is home to numerous chamber music ensembles that have thrived alongside each other, carving out their own niches with unique visions of how to present music and connect with audiences. After a challenging pandemic year when there was little work for musicians and existing groups could not do what they normally do, what does the landscape look like now? In this series, I caught up with musicians from nine distinctive ensembles in Houston to reflect on the past year and look to the future. In part one, I visited with Monarch Chamber Players, WindSync, and Kinetic. (Enjoy Part Two and Part Three as well.)

Incredibly, a new chamber music collective has exploded onto the Houston performing arts scene despite the inhospitable pandemic environment. The brainchild of Houston-based clarinetist Rebecca Tobin, Founder and Director of Monarch Chamber Players, the ensemble has performed over 60 outdoor concerts since last October, taking music directly to the people, popping up in neighborhood parks, cul-de-sacs, and church lots, and just as often on people’s front yards, porches, and driveways.

Houston had always been a great city for freelance musicians until the pandemic made work scarce. “At a certain point we realized that we are not going to get work from outside sources for a while,” recalls Tobin, “so it was time to make our own work.” She also saw a chance for people to gather safely outdoors, spread out, and still enjoy something fun and meaningful with friends and neighbors.

Tobin began with the musicians she knew, forming a wind quintet as the core ensemble, with Doug DeVries on flute, Katie Hart on oboe, Russell Rybicki on French horn, Jordan Brokken on bassoon, and Tobin herself on clarinet. They began in their own neighborhoods of Montrose, Lindale, and West University. An event post on the social networking service Nextdoor gathered over 200 replies in one weekend. “It completely blew up!” exclaims flutist and the ensemble’s Production Manager Doug DeVries. No one had heard live music in over half a year and people were hungry for it. The ensemble played over 30 shows between Thanksgiving and Christmas, offering a Christmas pops show, a Christmas classical show, a hybrid show, and the complete Nutcracker Ballet arranged for wind quintet. “It was the wildest December of our lives with multiple triple and quadruple show days,” beams DeVries.

“We are finding that concerts like these are creating a community space that hadn’t existed before,” says Tobin. “I feel more connected to my neighbors and my community than I ever did in my life before the pandemic. I was not expecting this to be a time to make so many new connections.” The bulk of the ensemble’s shows have been set up by neighborhood civic organizations and homeowners’ associations.

For members of Monarch, this has become a passion project. Their goal? To play in every community in Houston. By bringing music directly to all different neighborhoods, DeVries sees an opportunity to bridge the divides of socioeconomic background and race, as well as between people who don’t know about classical music and people who do. The programming is relevant and relatable, educational and fun.  Black History Month and Women’s History Month were both celebrated with special programs. “We are bringing people’s attention to issues and showing them that these are also relevant in classical music. We have included diverse composers on almost every program, as opposed to only white men.”

Now that the ensemble has gotten into a steady groove after the initial wild ride, they are working on expanding their roster to offer more flexibility in programming. “The vision was always to bring together a whole network of freelance musicians in Houston,” says DeVries. This past month the ensemble has already added strings and percussion, as well as expanding the wind section to perform wind octet programs. “So many musicians are still out of work. We want to include as many people as we safely can.”

The musicians of Monarch Chamber Players are putting down strong roots here in Houston at a precarious time for the music industry. At a time when people cannot go to the concert hall, they have found a way to bring music to the people where they are. They are invested in the community and hope that the community will see the importance of what they are doing.

Children are some of the most avid fans of Monarch. DeVries tells me about a family that has come to a dozen shows, the three children begging their Mom to keep track of the group on social media and take them to the next show. “Kids love the show. We do instrument demonstrations. They watch. They ask us questions. And they dance! It’s the cutest thing!”

Look for the Monarch Chamber Players around town in a series of potpourri concerts April 29-May 1, featuring unusual pairings of instruments in works that challenge and inspire the musicians themselves. The ensemble will cap off its inaugural season on Memorial Day in a concert at Sugarland Town Square, celebrating the diversity of America with music by American composers Amy Beach, Valerie Coleman, William Grant Still, Samuel Barber, John Philip Sousa, and Scott Joplin.

Houston-based wind quintet WindSync’s biggest revenue source is touring. “There were times when it felt like everything was dead,” admits Kara LaMoure, bassoonist of the award-winning ensemble. “Our touring schedule used to be robust and it was zero for about a year.”

The realization that the pandemic could be a long haul came slowly, and that was a good thing. “It was lucky that we had this optimism about the season,” reflects LaMoure. Our attitude was ‘let’s just do it.’ So, we immediately pivoted to a virtual format.” WindSync’s annual Onstage Offstage Chamber Music Festival last April was entirely virtual.

The ensemble was awarded a grant in the fall of 2020 by the Houston Artist Commissioning Project of Society for the Performing Arts. They commissioned composer Akshaya Avril Tucker to create a composition for the virtual premiere. Drawing on the composer’s interest in the music and dance traditions of South Asia, Hold Sacred is a reflective piece that takes the listener inward. The silhouetted movements of the players, interwoven with the composer’s own evocative choreography, enchant and mesmerize.

Another pivot for the ensemble was the addition of a Patreon subscription for its monthly virtual series. The numbers for WindSync’s virtual audience were up 20% last year as compared to previous years. “We have people interacting with us in real time from all over,” says LaMoure. “That kind of engagement and that type of event will stay post-pandemic. It’s not a concert in the traditional sense. It’s a whole new world.”

As successful as WindSync’s virtual season has been, the ensemble is eager to bring live music back to Houston. “Houston is THE place where we produce concerts,” LaMoure emphasizes. “It is our creative lab and the base of our educational programming and neighborhood initiatives.”

This year the Onstage Offstage Chamber Music Festival will run from May 4-8, live and in-person, as well as live-streamed for the virtual audience. In partnership with Methodist Hospital’s Center for Performing Arts Medicine, an extensive series of concerts for healthcare workers will take place throughout the Texas Medical Center from May 4-6.

And on May 8, WindSync will be joined by KINETIC and Loop38 in Pop Ups in the Park at Levy Park and Smither Park. The festival is all about connecting people and communities by bringing music to public spaces, as well as collaborating with other Houston musicians and ensembles. It will be a joyful celebration for sure. 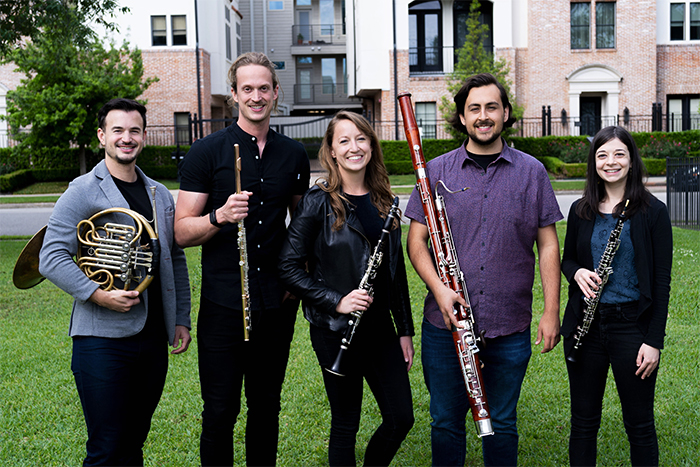 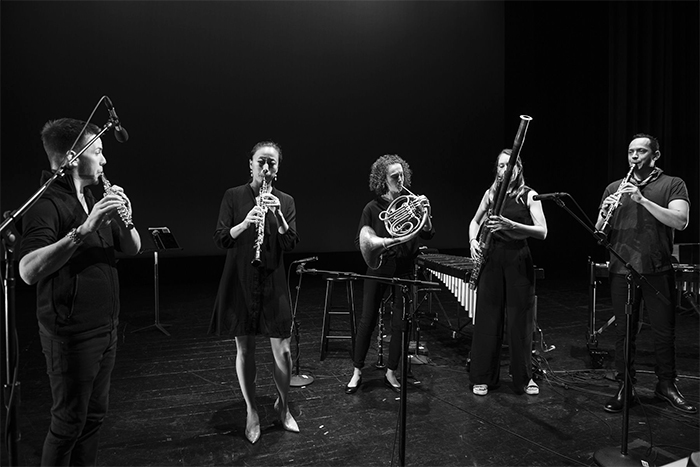 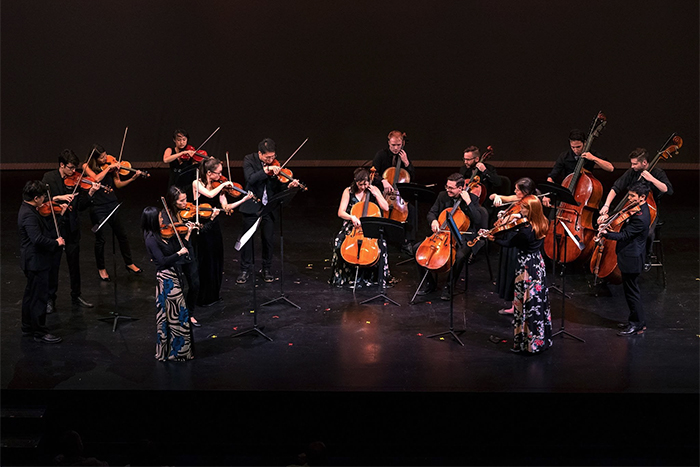 Artistic Director Natalie Lin Douglas leading the KINETIC Ensemble in a concert at MATCH in 2019. Photo by Ben Doyle.

Artistic Director Natalie Lin Douglas moved to Cambridge, Massachusetts in August, 2020 to take on her new position as Assistant Professor of Music at MIT, but she is still very much the architect behind Kinetic’s finely-tuned structure. Once it was safe for small groups of musicians to begin rehearsing in a socially distanced way, Kinetic launched their season of four main concerts, pre-recorded and streamed on scheduled dates for the public.

“My role has changed a little bit,” says Lin Douglas. “I’m still overseeing the whole season, but each program is curated by a different Kinetic musician. This gives each musician a chance to showcase what they are interested in and it also spreads out the leadership within the group.”

A perfect example was Kinetic’s first in-person performance of the season, Parallel Play, a collaboration with the Houston Contemporary Dance Company. The music for the outdoor performance at Discovery Green, which included works by Jessie Montgomery, Benjamin Britten, Philip Glass, and Osvaldo Golijov, was curated by cellist Bree Ahern. “Bree has always had a soft spot for dance,” explains  Lin Douglas. “She follows all the top dance companies. This was the ideal program for her to take on.”

The flexibility of the 16-member ensemble was crucial in its adaptation during the pandemic. For a concert at the Live Oaks Friends Meeting House, seven members could effectively perform Strauss’s Metamorphosen and still achieve a rich orchestral sound. A string quartet performed in conjunction with artist Tracey Meyer’s solo exhibition at Archway Gallery, exploring the musical and metaphorical parallels with the artist’s meditation on inflection points.

The season finale will be streamed from MATCH on June 6. Fifteen musicians, the ensemble’s biggest performing force of the season, will come together for an all-American program that will include works by Michael Abels, William Bolcom, and Jennifer Higdon. The Septet version of John Adams’s Shaker Loops will serve as the centerpiece.

“Everyone who participates in Kinetic is active in other things,” muses Lin Douglas. “Everyone brings their experience to the table. And regardless of the pandemic, coming together is always special.”