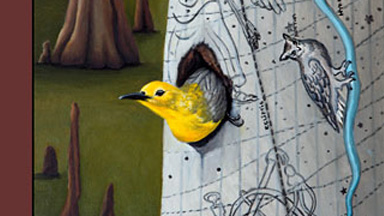 My problem is I never know when to read to poetry. It’s not something I want to read in bed at night or on a lazy Sunday afternoon. Poems require a different quality of reading commitment than other forms of literature. You don’t have the luxury of just watching the words go by. In her introduction to “Improbable Worlds, sale ” Mutabilis Press’s Carolyn Florek recommends stealing “a poem or two at lunchtime or before bed, thumb to take [her] briefly away from [her] busy thoughts.” Her use of poetry, this manner of poem snatching, I can relate to. It transforms the poem into a kind of prayer, or maybe a guided meditation.

Perhaps that was just the point of choosing poet Martha Serpas, to edit Mutabilis’s recently published, “Improbable Worlds.” Serpas, a trauma chaplain, earned a master’s from Yale Divinity School and now teaches writing at the University of Houston. “Improbable Worlds” asks poets from Texas and Louisiana to address the difficult question, “Given our noisy marketplace of belief, how or where can the sacred by found?” And it is through these two seemingly unwieldy frames that these writers work.

In this anthology, readers are bound to face weather, a Gulf fixation. But what is particularly striking is how nature is reverberating within the corporeal world, the most harrowing aspect of belief ’s marketplace. The turns of phrase in Jericho Brown’s “The Ten Commandments” that bend violently inside the reader. The fullness of desire in Hayan Charara’s line, “She love us like/a piece of fruit loves/to be eaten.” The astounding vividness that stomps through Janet McCann’s “Grammar” and floats across George David Clark’s “Jellyfish,” applies layer by layer a tangible complexity until the reader is drawn into a localized reverie, making the familiar unfamiliar. These poems do not force the reader to reach out, but rather beckons us to reach in.

Serpas has managed to string together some of the most talented poets, laureates and old guard included, who have been known to reside east of El Paso and west of Bogolusa. In reading a collection of poems by a single poet, I usually search for the arc, for the author’s eye. But in an anthology, I consider the vision of the editor. I wonder why they include three works by this author and only one from the other. I notice how the poems are organized and observe how each author rubs up against and complicates the other. To me, anthologies are more than collections; they are collages. Each piece is an individual work of art, but as a collective the pieces should offer a larger view of the world it inhabits. Each piece of the collage, each poem, should press against each other to forge an argument, staking a particular space in our consciousness. Despite its seemingly facile alphabetical ordering, “Improbable Worlds” accomplishes this effort. Serpas’ cultural and spiritual preoccupations firmly bind the anthology.

Reading each work, one does get the sense of torn pieces of the divine. Though, no individual poem in “Improbable Worlds” quite adequately addresses the question that Serpas initially poses, the whole of the anthology does the work. And in each poet’s attempt to reveal it’s sacred space, the poems somehow infuse energy into the reader, rather than draining it. Perfect work for the prayer.

— NICOLE ZAZA
Nicole Zaza worked as an editor for Gulf Coast and Envy Magazine. She recently graduated with an MFA from the UH Creative Writing Program and completed her first collection of essays. She teaches writing in Houston.