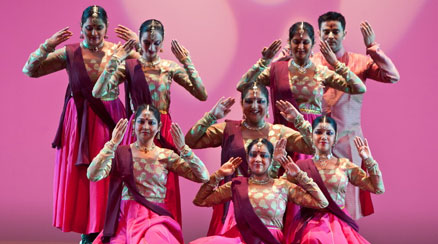 Following only a week after the latest Bollywood Blast programming, Samskriti’s Incredible India! event at Miller Outdoor Theatre on September 8 showcased two energetic dance troupes from India, one traditional, one contemporary: NADAM (Nathan Academy for Dance and Music), and Stem Dance Kampni. The operative word of the night was kathak, a millenia-old form of Indian classical dance that takes its name from the Sanskrit word for “story.” The origins of the tradition extend back to ancient Northern India when nomadic performers known as kathakas would use dance as a way to bring to life their recitations of epics and mythology. The two groups on display at Miller Theatre proved handily that this tradition is still very much alive, not only in its formalized techniques, but in its ability to communicate a tale even without words.

After the brief pre-recorded announcements about seating that came over the theatre’s PA system, I craned my neck around to see not only a packed house, but a hillside bedecked with picnic blankets and smiling faces. Many of those sitting next to me were eager to know if I had also been to the Bollywood show the previous week, because, it seemed, all of them had and they were ready for another memorable night.

The NADAM company, billed as the traditional half of the night, was first to take the stage.  Beginning with an ensemble vandana (invocatory) dance  to the elephant-headed god Ganesha, the dancers quickly introduced the audience to the vigorous footwork of kathak. The syncopated beating of heels and toes against the stage floor commanded the attention of both the eyes and the ears, creating an almost tactile experience for the viewer. From piece to piece, the company alternated between ensemble technical pieces and wholly narrative duets danced by company founders K. Murali Mohan and Nandini K. Mehta. The chemistry between the two, pairing Murali’s youthful bravado with Nandini’s brash coyness, created a light-hearted dynamic that captured the imagination even of those, like me, who didn’t necessarily know the mythological sources of the stories of Krishna or Shiva. The ensemble narrative piece, Varsha, focused on the natural wonder of rainfall, jumping between vignettes of such familiar splendor that I almost found myself looking up at the sky above us at the outdoor venue with a nostalgic feeling for past summer storms.

Throughout the seven pieces of their performance, NADAM had the audience mesmerized. It was clear from the beginning that the company were masters of their art, not only in their fleet footwork and evocative gestures but in the details of bringing such a performance before a big crowd. The sounds of bangles and bells shaking around the dancers’ ankles and the percussive slap of bare feet against the stage were amplified for all to hear thanks to some hidden but well-placed microphones. Having such a strong aural component went a long way in highlighting the intricacy of the dancers’ technique. The lighting, by keeping to minimalist swaths of color, provided just the right amount of visual complement to the narrative choreography, creating emotional resonance without drawing the audience’s attention away from the dancer’s themselves. For their closing act, Tarana, the use of Miller’s gorgeous LED backdrop created a magical effect, as if the bold sunset colors of the previous dances culminated in the transcendental starscape of a clear mountain night.

The second act of the night, contemporary group Stem Dance Kampni, itself founded by Guru Dr. Maya Rao, an acclaimed khatak dancer and choreographer, had moments of great effect, but the high production value set by the NADAM team left me wanting more. The lack of amplification of the stage sounds literally took the “oomph” out of the dancers’ steps, while the projected images often seemed to clutter the visual frame of the dancer’s movements. The points where the Kampni’s pieces really shone, however, were not in contemporary departures away from the kind of tradition embodied by the NADAM team, but in their own use of the essential ingredients of kathak: gestural storytelling and call-and-response footwork. The “fire” portion of their extended piece Vajra was thoroughly engrossing and was one of the more memorable moments of the night. As a finale for their performance, the Stem Dance Kampni performed a straight-ahead kathak dance, a fitting and well-executed closer that celebrated all that had come before, not only the previous two hours, but centuries of an exquisite tradition.

—DAVID A. FEIL
David Feil is a writer and educator in Houston, TX.