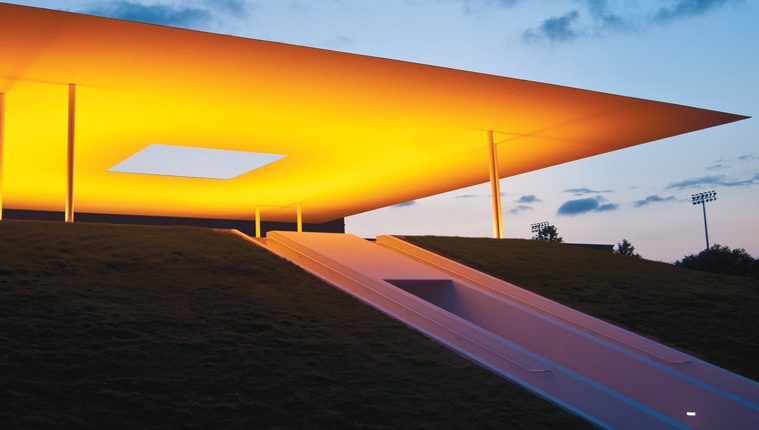 Using light as his main material, James Turrell deftly carves, blends, molds, and manifests confounding spatial experiences seemingly out of thin air. On June 14, Rice University will open a new permanent installation by Turrell, his third in Houston, to the public. Titled Twilight Epiphany, the work is the largest of the 73 skyspaces – architectural light installations that open to the sky through an aperture in the roof – he has completed to date.

Houstonians unfamiliar with Turrell’s work will find it unique, mind-bending, and maybe a little confusing. Those already indoctrinated will immediately recognize the skyspace as an unmistakably Turrellian, if uncharacteristically theatrical, portal into a colorfully sublime abyss.

Visitors walk into the heart of the small hill past the sloping, sod-covered berms and sit inside a perfectly square interior space on pink granite benches. The benches are reclined at an angle so that viewers in the space can easily gaze at the sky without too much strain on the neck, and there are additional seats in the upper viewing area, which is just at the top of the hill, perfectly out of the line of sight from seated visitors below.

Above the hill is the elevated ceiling, or roof-plane, with a 14-by-14 foot square hole cut out of the center. The edges of the ceiling slope down to a thin, razor-sharp edge on all sides, and this “thinning” of the roof confuses your eye, flattening three-dimensional space into a two-dimensional surface. It’s a supremely effective technique.

The first Turrell skyspace to be engineered for acoustics, Twilight Epiphany will be used by Shepard School of Music students and faculty. PHOTO: NED DODINGTON.

During 40-minute light shows at sunrise and sunset, Turrell projects a programmed LED display against this surface, essentially blending into one spatial experience the colors of both the natural sky and man-made LED’s. The result is variously confounding, disorienting, awe-inspiring, spiritually moving, and simply beautiful.

This is a space in which to lose yourself. There is something transportive about the experience, but rather than commuting us to a new world, I think Turrell, a Quaker, is asking us to look within ourselves for an inner truth. Twilight Epiphany, like the Rothko Chapel, requires viewers to bring their thoughts and emotions to Turrell’s dimensionless space, which at times reads as flat, other times infinitely deep.

Siting adds another layer to Twilight Epiphany, which was placed directly in line with the central axis of the campus plan. It sits exactly astride the centrally planned axis of Rice University and conceptually connects viewers in the space with Alice Pratt Brown Hall (the Shepherd School of Music), the Brochstein Pavilion, Fondren Library, W.M. Rice’s Tomb, Lovett Hall, and the main gate. Not only does the placement of the skyspace align viewers with the history and plan of the campus, but the positioning of the opening in the ceiling, in effect, realigns the central axis according to a new cosmic (perhaps heavenly?) direction.

Turrell was born in 1943 in Pasadena, California to Quaker parents. He spent his early adulthood flying small planes and later received a BA from Pomona College in perceptual psychology, and conducted research into the Ganzfeld effect, a visual phenomenon caused by staring at an undifferentiated and uniform field of color.

The effect, often described as hallucinations or apparent blindness, results from the brain’s amplification of neural noise. Basically, in the absence of visual stimulation, the brain manufactures its own. The condition illustrates the physical and neural limits of perception but also suggests the culturally determined constraints about how we visually construct the world around us.

It’s not too hard to imagine a young Quaker pilot hallucinating while soaring in a sea of cerulean blue sky. And it’s equally tenable to imagine that same pilot searching for inner meaning in dreams and hallucinations. That same limitless, hallucinatory space is what makes Twilight Epiphany so powerful.

Turrell’s work is often more about what you don’t see than what you do. The experience of unbounded space in a bounded volume is tough to pull-off and depends on the artist’s ability to hide edges, conceal structure, and reduce the architecture to nearly nothing. Generally, the mechanics of his manipulations of his works are artfully concealed out of sight and the viewer leaves with a “how does he do that?” expression and a regard for Turrell as minimalist magician. But this is not so much the case at Rice. The openness of Twilight Epiphany, the fact that it’s outdoors and the separation of the roof from the base, reveal the magician’s tricks to plain sight. We see the knife edge of the floating plane above us.

The LED lights, even while they’re changing color, are revealed and visible to the casual observer. Now, one might say that it doesn’t really matter. The colors still change and the sky still morphs along with it. But somehow it does matter. Some of the magic, at least for this viewer, has been lost, replaced with an un-Turrellian showmanship that speaks more about 21st century dazzling light-tricks than about introspection and inner truth.

The Rice skyspace has several characteristics – the disconnected roof; the externally visible light display, which can be seen from a considerable distance; the large constructed berm – that may cause viewers to experience Twilight Epiphany more as a glowing object than as a contemplative space.

The result is that this work is not as quiet, private, or impactful as his more enclosed skyspaces – think of the Live Oak Friends Meeting House in the Heights, or Meeting, Turrell’s long-term installation at the Museum of Modern Art’s P.S. 1 – and there is something lost in that.

But as I sat in the skyspace on a partly cloudy Sunday night, tilting my head towards heaven, I can’t deny that I was transported. If there’s one thing I love about Turrell, it’s the ability of his work to humble me – to overpower and overwhelm the senses in a way that reminds me of the fragility and specialness of human life in this world. We are just one among many, and in a Turrell I feel so very small. To say it’s sublime is an understatement.

I get a similar sensation staring at a full starlit sky out in the deserts of West Texas, or losing myself in a Rothko. But there’s nothing quite like the experience of getting lost in a Turrell skyspace, even one in which you can see behind the curtain. Turrell’s art is big, Texas-big, and in this regard totally appropriate for its location. It fits Houston perfectly.

–NED DODINGTON
Ned Dodington is the Director of Caroline Collective, a founding board member of C2 Creative, Chief Editor of AnimalArchitecture.org and a designer at PDR.