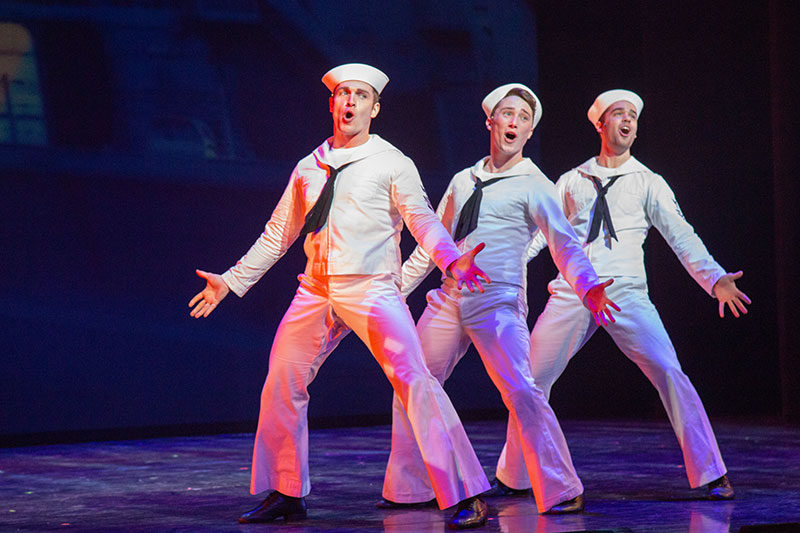 For the last Hobby Center production of its 50th anniversary season Theatre Under The Stars threw a hell of a centennial birthday party for Broadway icon, choreographer and director Jerome Robbins with their revival of Jerome Robbins’ Broadway. Originally created and directed by Robbins himself in 1989 as a kind of anthology of some of his most beloved numbers, with a few lesser-known surprises, this TUTS production feels less like an ordered collection of dance scenes, and more like a ginormous party with lots of remembrances and recounting of the honoree’s greatest accomplishments.

And like all epic parties, when we wake up the next morning with a well-earned hangover, we might remember some moments with joy, some with a bit of cringing embarrassment, but a few grand moments might have us wondering if someone laced our drinks with psychedelics.

Directed by Cynthia Onrubia, Robbins’ right, and likely left, hand woman in Broadway’s original production, the show begins with a sung overture and woven verses from songs like “Shall We Dance,” all proclaiming the show’s main message: it’s all about the dancing. Only then does the curtain rise on Robbins’ framing device and original show character, Setter (an amiable Jeffrey Schecter). Acting as an Emcee and narrator, Setter also hops into some of the scenes playing Tevye in Fiddler on the Roof and Cigar in Gypsy. Throughout the two extravaganza acts, Setter leads us into most of the long and short pieces from West Side Story, On the Town and Billion Dollar Baby, to name a few.

While the show only puts a light fairy dust of context onto some of the numbers, including the “I’m Flying” scene from Peter Pan, putting Jerome Robbins’ Broadway into a bit of historical context helps us understand the vast artistic endeavor on stage.

Winner of six Tony Awards in 1989, including Best Musical, Jerome Robbins Broadway triumphed in New York at a time when West End blockbusters had ushered in a era of musical as spectacle like Cats and Phantom of the Opera, as intricate set pieces sometimes dwarfed the actors. American born and bred big dance numbers were mostly fond memories.

Then Jerome Robbins’ Broadway leaped, Charleston-ed and, in the case of Peter Pan, literally flew onto the Broadway stage making those warm memories manifest with scene after scene of extraordinary dance sequences. Now 30 years later and over 70 years since one of the oldest of the shows, On the Town, first hit Broadway, taking these musical numbers out of the stories from their original shows leads to both revelation and a few graceless moments, even though performed by a stellar cast.

Robbins has his Setter give plot summaries to some of the most well known shows, like West Side Story, while very few words of introduction for material many of the audience had probably never heard of, like the 20’s-set bootleg and flapper extravaganza Billion Dollar Baby. The second big set piece in the show, “Charleston” proves how great choreography lives on even if the show that conceived it has faded.

For this 21st century revival, I’d argue the lesser known dance sets, randomly thrown at the audience, work better than the ones we know. Yes, “Suite of Dances from West Side Story” still holds great violent and serene beauty, but we’re still only getting an abridged Story. It’s also difficult to listen to the lyrics of “America” in 2019, and the off balance staging of the number with only two of the cast singing the virtues of Puerto Rico against an Anita (a fantastic Gabriella Enriquez) led flock of women dancing for the continental U.S doesn’t make it easier to view. I didn’t catch the later addition line “Puerto Rico’s in America,” four words that can make some difference.

And while TUTS has appropriately cast the lovely rendered “The Small House of Uncle Thomas” ballet from The King and I, it opens the second act without any real introduction or context. (The Setter is notably, and probably well-intentionally, absent from this one.) I can’t image an audience member who has never seen The King and I trying to decipher the “Uncle Thomas” ballet, not knowing the subplot from the show of Tuptim attempting to win her freedom through theater, by directing her own interpreted version of Harriet Beecher Stowe’s Uncle Tom’s Cabin.

Yet those numbers from likely little-remembered shows that deluge the audience with torrents of bodies spinning and leaping onstage are truly revelatory. The highlight of the entire production was the seemingly never-ending madcap chase scene, “On a Sunday By the Sea,” a sequence from the seldom revived High Button Shoes. With bathing beauties of both sexes, a cartoon dressed gang of crooks, keystone cops, a bag of ill-gotten loot, and one gorilla all dance-diving in and out of as long row of beach huts, I sat agape in my seat thinking only two thoughts: What am I watching? Never let it end.

Onrubia helms a controlled chaotic ship of 47 local and national performers on stage, including three students from TUTS’s Humphreys School, with most playing several roles throughout the performance. While there are too many great performances to single out everyone who deserves an ovation, the un-singing star of the show has to be costume designer Colleen Grady who adds a rainbow of colors to the many eras and theatrical worlds depicted.

For the final numbers we go back to On The Town as the sailors head back to sea, but then that fourth wall keeping the party in separate rooms breaks and suddenly all the disparate characters from the different shows come out to waltz together. It’s a fevered technicolored dream of an ending that leaves us with morning memories of a damn fine party.